DASHING THROUGH THE TROUGH
Another Tax Cheat In the Cabinet? 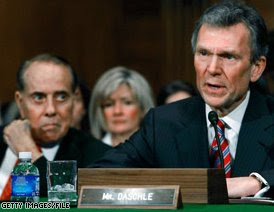 Daschle answering questions while Bob Dole
(sitting in front of mannequin) glowers at the press corps.

There is nothing wrong with the fact that you have become a multimillionaire after you were trounced in your last reelection bid. That is, after all, the America Way. Failed politicos dive into the private sector salivating over the big money they can make cashing in on their connections and 'knowledge’ of the ways of Washington. Good for you Tom. Your unabashed greed and lack of ethics across the board is no less than that of so many of your colleagues who have been bounced out of office.

There is nothing wrong with serving on a Board of Advisers for a company owned by your buddy and big campaign contributor. Hell, he was such a good friend he provided you with a chauffeur driven limo for the last few years. What a shock it must have been, Tom, to learn that your good pal was not THAT good of a pal; the driver and limo apparently left you holding the bag for $128,000 in unpaid taxes. Shucks. That was an “honest” mistake, a mere trivial oversight in the big scheme of things. Yup. So you've been gluttonous scarfing down all the lobbyist money available in the K-Street trough. So what, who cares, Tom-tom, that is your right as a former Senator. Loosing hasn't been all that bad, eh?

Some Americans may recall Daschle as the soft spoken, incompetent Senate Majority (for two days) Minority Leader until he was knocked off his little thrown by an empty headed pretty boy, John Thune. Thune has followed in your footsteps, Tommy boy, and is equally inept, ineffective and unremarkable as you were in your time in the Senate. Sorry, this is not about John, Tom. This is about you and your disingenuousness, lack of ethics, morals or any ability to serve in the cabinet. Secretary of Health and Human Services? Sure Tom, that is right up your alley, eh?

Tom, if you have a decent bone in your corrupt, skinny body, you should do the honorable thing and remove yourself as a candidate for this Cabinet post. Cut yourself quickly from any affiliation with the Obama Administration, save them the embarrassment of you; they do seem to have problems aplenty without your crookery added in.

ps: Tom, if you need some quick cash look under your mattress or in your lobbyist wife's purse. Plenty there, right? Scumbag.

Yeah, that's right. Google has YET to repair the active links problem that has been plaguing so many of us for so long. Once again, please cut and paste the link you are interested in reading into your browser.