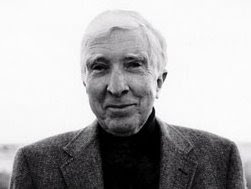 
(Jan.27, Boston, Mass.) Thirty miles north of here, at the age of 76, one of the great writers of the last 50 years, John Updike, died in a hospice earlier this morning. He had battled with lung cancer in his later years and, reportedly, passed on quietly. He will be missed not only by close family and friends but also by generations of readers.

Many who were exposed to Updike’s literary world and fictional portrayals of life in early suburbia and beyond will forever be grateful for what he produced. He allowed some of us, young boys growing up in the inner city, a voyeuristic peek into the lives of Americans living in places and circumstances that helped explain why our parents stayed where they were. His storytelling, characters, settings , and scenarios were written beautifully descriptive, sometimes dryly humorous, but always very human in the ordinariness and commonality of personal struggles.

His four part “Rabbit “ series followed suburbanite Henry Angstrom’s travels through the years. Updike used Angstrom as a tool to explore the intricacies of the psyche, desires, and dreams that often - usually - harshly clash with the mundane reality of daily drudgery, of our everyday life.

Updike’s writing career began in 1955 and brought him wide acclaim at an early age. he managed to produce 60 books as well as critiques, essays and social commentary illuminating a variety of topics that interested him. His work appeared in publications that spanned the scope of his acute observations from The New Yorker to Scientific American.

Some Cynyx came to know Updike’s perspectives and insights in our teens. Others of us discovered him while overseas in the military, others while serving time, finding distraction and education in his books borrowed from prison libraries. We will all mourn his passage and miss one of the most talented authors of our time, a man who helped us learn by expanding our horizons of thought through his gentle, often poetic prose. He not only taught us what could be done with a well crafted sentence, vocabulary, and how to express verbally, but that our observations and questions could be used as an outlet as well as an inward conduit to people and places far removed from our lives but very familiar in our frailties.

Rest in peace Mr. Updike and thank you.