ENFORCING THE LAW IN NYC: THE “HUMAN FACTOR” & HARSH REALITY


PROTECTING AND SERVING WHILE HAMSTRUNG 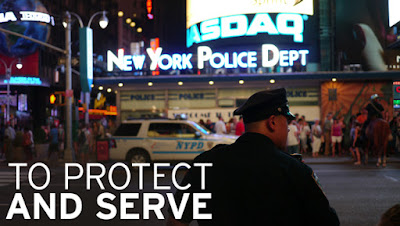 THIS IS NOT THE TIME FOR OUR POLICE DEPARTMENT TO BE TAKING
A PASSIVE STANCE.

(Wednesday June 3, 2015 The Bronx, NYC)  Policing New York City, has always been a dangerous, gritty, often violent endeavor; one taken up by men and women of a certain mindset.  It is not a profession for the faint of heart.  It requires a wide array of innate character traits, specialized skills acquired in the Police Academy and then on the streets, as well as a mature temperament.  The NYPD by and large only admits to the Academy those men and women who have passed the initial screening process including the physical and psychological testing prerequisites.  As any Cop would say, his or her real training began once they graduated from the Academy and began their first posting in a precinct.  It is at that time each newly minted Cop must pass the most difficult tests, those monitored by the veteran Cops they work with.  Those tests administered daily can make or break a career by weeding out those who simply are not suited for the work, those who will never be trusted by their peers to be reliable partners or good street Cops.

There was a time in the NYPD, up until the early 1980’s, when the unwritten rule among veterans was that it took seven years for a rookie to lose that status and be fully embraced and truly called a peer.  The thinking was that within a seven year time frame every rookie would have at least been exposed to as many facets of the Job, as many situations and scenarios and have proved their mettle under pressure and the close observational scrutiny of the veterans they worked with.

Armed with nothing more than the fundamentals of the law and the basic skills, the rookie must prove themselves every day.  That each of them pass muster, so to speak, among the veterans who supervise and work with them, is essential.  During those years each Cop hones their physical skills, their abilities to control an arrest, deal with a crowd, rapidly process often conflicting observational stimuli, and the dozens of other unconscious and subconscious abilities that collectively evolve into real, reliable, actionable, instinct and intuition; the capability to know and feels the streets, the mood in the air, the wafting scents of impending danger all of which come together to make a Police Officer a Cop.

THE AMORAL APPROACH TO URBAN POLICING: STAND DOWN

Anyone who even pays the most minimal attention to the news knows that the incontrovertible decline in crime over the last 20 years here in NYC and in other large urban areas is beginning to be undone.  Politicians, pundits and so called “experts” have been flooding the airwaves and taking to the editorial pages to offer their opinions and theories regarding the increase in crime, violent, gun-related crime in particular.  For all their talk, the veritable ocean of blather they spew, none come close to being objective and recognizing the undeniable reality on the streets.  While all these blowhards are busy making claims and skewing statistics and “trends” to support their pet theory, politicians such as NYC Mayor Bill de Blasio, prove themselves to be not only living in a parallel reality but also to be apologists, imbeciles, and spineless.  Some of Mayor de Blasio’s recent comments not only contradict each other, they are so far from the truth that he may as well be speaking about crime on Mars.

Never one to let an opportunity to lambast Cops pass by even the President of the United States views the spikes in crime rates as a matter of more stringent “gun control”.  The absurdity of his statements alone disqualify him from having any “bully pulpit” from which to offer anything positive to the debate that is simmering towards a boil over Police practices, policies and procedures.  President Obama, rather than support Law Enforcement, has chosen to condemn the police and call for a “softer police presence” in crime riddled areas such as Baltimore, a city that just weeks ago saw some of the most destructive civil unrest in decades.  Baltimore, a city that had a dramatic increase in shootings and shooting deaths in May, the highest single month totals in over 25 years.  But the story of Baltimore is a story for another time.  It is mentioned here merely as an example of a city gripped by the scourge of street crime and a Police Department under fire – literally – and asked to “stand down”.  Even the police Commissioner of the Baltimore PD, Anthony Batts, admits the low morale of his police Officers, he refuses to address the morality or rather the immorality of allowing his Officers to take a hands off approach to street crime.  Instead he and Baltimore Mayor Stephanie Rawlings-Blake are welcoming in the Department of Justice to conduct a “review” of all aspects of the BPD.  If that is not demoralizing to the rank and file MOS, what is?

THE CURTAILING OF “SQF”: CAUSE AND EFFECT

Born out of the tried and true implementation of the “Broken Windows Theory”, the practice of “Stop, Question, and Frisk” was a powerful tool in the operational tactics of the NYPD.  When then candidate de Blasio predicated virtually his entire electoral platform on the elimination of “SQF” he was widely lauded as a true “progressive” who recognized that “SQF” had outgrown its legitimacy in NYC. The New York City de Blasio inherited was the safest large city in the USA.  Crime rates across all major categories were at 30, 40 and 50 year lows.  The Broken Windows Theory and “SQF” were the double barreled practices that rescued our City from the dreadful abyss it was poised to fall into when Rudy Giuliani became Mayor.  His Police Commissioner at that time was the same man on the 13th floor of One Police Plaza, Bill Bratton. (We’ll not address the well-known Giuliani/Bratton divorce nor the Bratton of today who appears to have sold his soul to be NYPD Commissioner).

The results of Broken Windows tactics and “SQF” in NYC were nothing short of astounding.  Quickly they were adopted by Police Departments in other major cities across the country.  Only a fool or moron could dispute the sheer effectiveness of these two policies.  But since candidate de Blasio has become Mayor de Blasio, a cold bucket of the water of reality has been dumped over his head.  Clearly his ambitious “progressive agenda” the centerpiece of which was “reforming” the NYPD (reforming?!) has unceremoniously backfired as any Cop could have predicted it would.

“SQF” was beyond question the single most significant factor for getting illegal guns off our streets.  Although nothing seems capable of staunching the flow of illegal handguns up the Interstate 95 Corridor destined for NYC, once in the hands of the criminal element here, thousands of such guns were confiscated during “SQF” incidences.  As many Democratic, Liberal and Progressive politicians, “activists”, ministers, and commentators had applauded the curtailing of “SQF” after a controversial court ruling last year, the same rationale de Blasio cited for his efforts in the elimination of “SQF”, some of these vary same actors in neighborhoods that are experiencing the highest upticks in violent crime are calling for de Blasio to “bring back SQF”.

Long time and long winded opponents of SQF initially celebrated during the time the NYPD was allegedly “standing down” as a silent protest against a Mayor they have little to no respect for.  The activists lauded the fact that the almost total abandonment of SQF, fewer police interactions with the public and a dramatic decrease in everyday arrests, did not result in higher crime numbers.  Confident they were witnessing living proof of their position; they clearly were blind to the reality of a less active Police force in NYC.  Gradually the numbers began to creep up; there were several high profile shooting incidents, broad daylight attacks on Officers on patrol, and in several precincts in The Bronx and Brooklyn, gunfire was returning to the soundtrack of life on those streets. The stark, bloody reality of fewer arrests was beginning to rear its ugly head.

Policing is an integral component of a civil society fulfilling a mission that is simultaneously hazardous and thankless.  In our City of over eight million diverse residents, without a proactive NYPD we will most definitely continue to see crime and violence escalate.  Summer is fast approaching; a season that typically has the highest rates of street crime. This is clearly not the time to be seeking widespread “reforms” of the strategy and tactics of our Police Department.