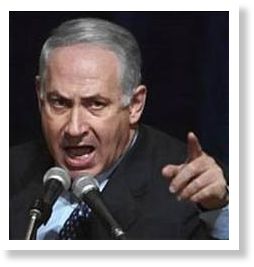 Benjamin Netanyahu angrily lashes out because President Obama
does not share his sense of urgency over a “nuclear Iran”.

(Sept. 16, 2012 – New York, NY)  Of all the complexities, nuances, facts and fictions that have defined United States foreign affairs, foreign policy and all our geopolitical relations since the end of World War II, the most enduring fallacy is that the nation of Israel is our closest “friend” and “ally” in the Middle East.  That this belief is accepted by so many today is a testament to the herculean efforts by decades of American and Israeli leaders, politicians, and special interests to perpetuate what is in harsh reality a myth.  The truth is that the relationship between our two countries is the most one-sided of the many that America is engaged in around the world.  Time and time again, in well-known episodes and deeply held secretive operations, Israel has clearly proven she is neither friend nor ally, not an equal partner with America but rather a parasitic, duplicitous entity that has used the United States in selfish, self-serving ways since its very creation in 1949.  Self-righteously standing behind the dark horror of the Holocaust, Israel has operated under the misguided premise that the atrocities of Nazi Germany somehow imbue them with a special, if not sacred place in the community of nations.  That is simply not the case.  As tragic and inhumane as the Holocaust was when it was perpetrated in the late 1930’s until the American led Allied victory over Germany and the Axis in 1945, it no longer has any relevance to the realities of  the seemingly intractable issues that keep the Israel, her neighbors and the entire Middle East mired in perpetual conflict and turmoil.

The latest demonstration of Israel’s belligerent, petulant insistence that America stand with her no matter what the cause or ramifications is heard in the bellicose blustering Israel’s current Prime Minister, a hard line militant conservative of the Likud Party, Benjamin (Bibi) Netanyahu.  Bibi declares with a rabid certainty that the impending realization of “Iran’s nuclear capability” has his nation, today or tomorrow, “facing annihilation”.  Appearing on NBC’s Meet the Press earlier today he assured the viewing audience that Iran is “within six months of having a 90% capability to make an atomic bomb”;  an eerily reminiscent statement much like George W. and his crew’s assertion about the existence of WMD in Iraq. We watched the tragic consequences of those lies.  Netanyahu bloviates and barks about drawing “red lines” with Iran and that they are already in the “red zone and we cannot allow them to make a touchdown”.  Well, if that is in fact the case, do what you must Bibi, to eliminate the “existential threat” you must feel Iran poses.  But, you should be well advised and consider that if you are wrong, if your own fanaticism and extremism is driving your policy and you are trying to somehow force President Obama’s hand, you will not succeed.

For the first time in recent memory or at least since the days of the George H.W. Bush Administration, we have an American president with the resolve to stand up to a bullying Israeli Prime Minister and not be conned into making statements and commitments that indicate to the world that Israel can do whatever she pleases.  At a time of real overt hostility and violence towards the United States in the Middle East as demonstrated by the attacks on our Embassies in Libya and Egypt that took four American lives, President Obama is putting some much needed distance between the Jewish State and the United States.   And this is how it should be.  This is not “anti-Semitic”; no.  This is good, sound policy that places our interests ahead of the parasitic Israel that has for far too long depended on us for support if not protection.

The fundamental argument for our unimpeachable support of Israel has always been that she is the “only bastion of democracy” in a hostile region surrounded by neighbors committed to her destruction.  Israel is no more a democracy than was South Africa during the brutal Apartheid era.  Democratic nations do not oppress a substantial segment of their population as Israel continues to do to the Palestinians.  Democracies do not commit human rights violations on an epic scale nor do they consistently ignore dozens of United Nations Security Council resolutions with galling impunity.  For decades the only “ally” Israel has had in the United Nations has been the United States who has always vetoed pro-Palestinian resolutions as well as any international efforts aimed to stop Israel’s unchecked abuse of millions of her non-Jewish citizens.

Israel, thanks to arms of every type supplied by the United States, has a very powerful military apparatus.  The Palestinians forced to live in small segregated noncontiguous portions of Israel have no military, no weaponry that comes close to that of Israel’s.  When the Palestinians in the West Bank or Gaza Strip manage to lob a rocket or grenade over one of the towering walls that confine them, Israel responds with a level of disproportional military might that results in the murders of unknown innocents as well as the destruction of entire neighborhoods.  Some Palestinian kids throw rocks at the Israeli troops who control every aspect of their lives and Israel with drop a bomb on the neighborhood those kids lived in.  The criminal asymmetry of this on-going conflict defies international law and clearly demonstrates Israel’s disdain for the morals and ethics that define democratic society.

Inextricably linked to the litany of lies sold to the American people regarding the imperative that we stand ‘shoulder to shoulder” with Israel are a host of hypocrisies and disingenuous pseudo-explanations for the crimes Israel has perpetrated on the United States.  Israel is a nuclear power (yet refuses to admit it) due largely to the theft of our nuclear secrets and the cooperation of a cadre of Zionist scientists who labored on the Manhattan project.  Israel has and continues to conduct active espionage operations on our soil.  They have never fully apologized for the attack of the USS Liberty and they continue to try to barter for the release of Jonathon Pollard, a convicted spy responsible for providing Israel with some our most valuable technical data about our intelligence satellites.

Israel has so coopted many of our politicians that they are confident that the United States will continue to do its bidding.  Israel has no friends; they use the United States under the flimsy guise of ‘friendship”.  Well, we won’t be fooled again.  We must not allow Netanyahu to influence the presidential race between President Obama and his pandering opponent, Mitt Romney who looks out at the Middle East from within the hip pocket of his old Boston buddy Bibi.

Israel is a sovereign nation free to act in her own security concerns.  If Netanyahu’s paranoia compels him to launch preemptive strikes against the alleged nuclear facilities of Iran, that is his business and he must deal with all the complications and ramifications of thrusting the entire Middle East into lethal turmoil.

Posted by Brooding Cynyc at 3:34 PM No comments: