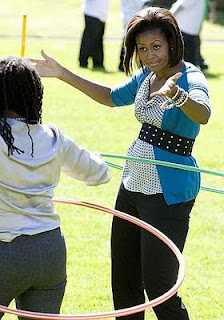 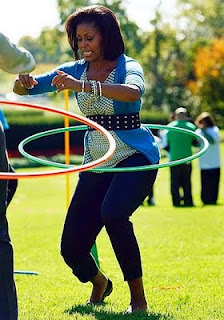 Mrs. Obama on the South Lawn of the White House.
Falls short of Guinness record, raises campaign funds for Democrats.


(October 22, Washington, DC) What could be more “down to earth” than the First lady hula hooping, running, and jumping rope on the manicured South Lawn of the White House?

Yesterday, while hosting the “Healthy Kids Fair”, Mrs. Obama attempted to break the Guinness World Record in the Hula Hoop event. While she fell far short of her goal, she did attract a good deal of attention from the area children who were present as well as the media, White House staff and Secret Service agents. A White House source leaked the news that a DVD of Mrs. Obama swinging her hips and shaking her booty was to be sold as a fund raising gimmick. The source, speaking anonymously said, “The DNC hopes the DVD will generate substantial revenue. I think it will be a big seller. I know, I'll buy a copy for my own private entertainment.”

Since taking up residence in the White House, the First Lady has used the White House grounds for a variety of events, has planted a vegetable garden, and placed a swing set for her two young daughters.

Mrs. Obama has become well known for, among other things, her athleticism, style, fashion sense and healthy life style. Earlier this year, her well muscled arms got a good deal of media attention as did her appearance exiting from Air Force One wearing casual shorts. White House Chief of Staff commented, “Hey, she has a heck of a body. If I wasn't a closet homosexual with a mad crush on Anderson Cooper, I'd really be excited.”

While there has been some harsh criticism from the Republicans and conservatives about some of Mrs. Obama's fashion choices and public displays of her anatomy, recent polling indicates that the American public is very comfortable with her. “She has stellar numbers, across all demographic segments. She is extremely popular. Mrs. Obama is a powerful role model not just for young African American and Latina girls but for women all over the country and the world”, noted Stan Greenberg of Greenberg Associates a highly respected polling company based in Arlington Virginia.

After eight years of the school-schoolmarmish, stodgy, if not frumpy reign of Laura Bush as First Lady, Michelle Obama appears more “regular” and “accessible” according to the Greenberg polls. “In all the years of polling about First Ladies, these are the highest numbers I've seen. She is more popular than her husband, the President, by a fairly large margin.”

Copyright TBC 2009 © All Rights Reserved
Posted by Brooding Cynyc at 2:33 AM No comments:

KARZAI KNOWS WHERE HIS BREAD IS BUTTERED

Hamid Karzai – Crook, Opium King, Statesman
Time For This Bum To Go Or Go It Alone.


(October 20, Kabul, Afghanistan) All of a sudden the corrupt “president” of this war and neglect ravaged country is supporting a run off election after evidence of widespread voting irregularities were documented by a United Nations elections watchdog group. Hamid Karzai had been opposed to the idea of a run off between his opponent, Abdullah Abdullah, until the United States threatened to shut off the spigot from which he has collected billions of our dollars. If nothing else, like every other corrupt, self serving politician, Karzai will fight to save his ass to remain in the position to siphon as much of the money intended to rebuild this country into his own coffers.

It should not come as a surprise that Karzai is as criminal and corrupt as he is; after all, he was the hand picked “president” of the Cheney / Bush Administration. They certainly were able to form a “democratic government” in Afghanistan eerily similar to our own – it is rife with corruption, patronage, bribery and criminality of every sort and on a grand scale. The United States has poured untold billions of dollars into Afghanistan for everything from the development of a central government, infrastructure, schools, hospitals, utilities aside from our 9 year old military mission here.

Immediately after the polls had closed on election day, August 20, 2009, complaints began to trickle in from all the far reaching provinces and territories in this rugged, vast land. The United Nations backed Electoral Complaints Commission was made aware of all manner of voting and polling locations reporting irregularities. The voting public of Afghanistan quickly recognized that something was not quite right when the initial results were tallied and announced. In some polling places Karzai had “won”100% of the vote; in other locations, particularly in Abdullah's stronghold, the results were as dramatically skewed.

Despite claims of election fraud from all quarters, Karzai had remained defiant. He resisted the notion that his election was invalid and illegitimate and would not entertain any discussion of a run off. He claimed he had legitimately captured over 50% of the votes cast. With 50% of the vote or more, the Afghan “constitution” would not provide for a run off. The outrage of the Afghan people and the international community has been growing ever since.

Last week Karzai began to speak about the possibility of a “coalition” government; a “power-sharing” arrangement with Abdullah. This was not well received by anyone; this country is notoriously fractious and even the notion of a “coalition” as a central government was considered absurd by experts in America, the United Nations and certainly among Afghanistan's neighbors Pakistan and Iran.

As the debate in Washington, DC has heated up regarding increasing our military troop levels here, the need to rectify the electoral mess grew more pronounced. A group of envoys from several Western nations including the United States, held talks this past weekend with Karzai. Clearly the lack of a perceived legitimate government in this country was impacting the debate in the White House and Pentagon. Our military efforts in this country have been questioned for some time now and a dramatic change in tactics and strategy has been implemented since President Obama appointed General Stanley McChrystal last summer to lead our efforts here. The Taliban and Al Qaeda are widely acknowledged to be as powerful as they were prior to September 11, 2001. Under Karzai's tacit, if not overt approval, the opium trade has grown exponentially and serves as the major source of funding for both the Taliban and Al Qaeda.

According to a recent Newsweek article by Evan Thomas , General McChrystal “is a purebred warrior, the son of a two-star general, West Point class of '76, a former commander of the elite Rangers Regiment, and, from 2003 to 2008, the head of hunter-killer black ops in Special Operations.” He recently released a report for the President in which he requested an increase of up to 60,000 additional troops. That issue, the issue of combat troops, primary among others, dominates the debate and dilemma Obama and his top advisers are engaged in.

A member of the National Security Council, speaking not for attribution said, “We would not be in this position now if George W. Bush would have kept his focus on the real fight in 2001 instead of traipsing off to fight his disastrous war of choice in Iraq. Afghanistan is where our real enemies were. They are still there or, at least the ones who didn't slip away at Tora Bora are. The Taliban, Al Qaeda, they should have been the focus of all our military resources and might. Now, 9 years later, we have to try to sort this out and define precisely what our mission is. We cannot afford to kept spending lives and money recklessly.”

Recently, several in depth, outstanding journalistic pieces have appeared in publications most notably, Dexter Filkins piece in the New York Times Magazine on Sunday, October 18. General McChrystal states his perception of the situation on the ground and his goals for the future. According to the General, he views our troops role as one of “interacting” with the local population hoping to win their trust and cooperation. While his may be a noble ambition it poses risks to our troops that seem to be not worthy. The idea that we, or any outside force, can enact real change and establish a central government in this country is absurd, dangerous and futile. We should concentrate on eradicating Al Qaeda and members of the Taliban who choose to fight.

It is a shame that after nine years in this almost primitive country that it is only now, at this crucial juncture, that a real debate is being waged in Washington, DC about our future here. Hopefully, some pragmatic, realistic, thoughtful minds will craft our future mission that should include letting the Afghans fight their own battles, establish their own government and stop the flow of US dollars and troops into this harsh, unforgiving place. Let the Afghans fight their own insurgents while we concentrate on our enemy. To do anything else is to guarantee that we will be bogged down in Afghanistan for decades. Enough is enough.

Copyright TBC 2009 © All Rights Reserved
Posted by Brooding Cynyc at 3:00 AM No comments: