ONCE, WE DID OWN THE NIGHT 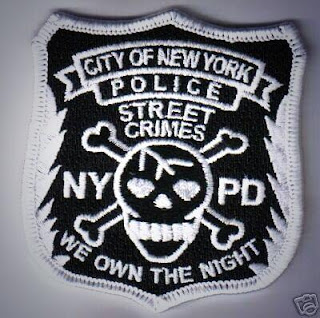 (Friday June 19, 2020, Midtown South, NYC) In a startlingly head spinning capitulation to the recent groundswell in some quarters to “abolish”, and/or “defund” the Police, NYPD Commissioner Dermot Shea announced the elimination of the 82 elite Anti-Crime Units.  He said all affected Officers and Detectives will be “reassigned”. Such a blatant display of pacifying, placating, and pandering to the most vocal of the protest groups that have found a platform in the wake of the death of George Floyd, an African American man at the hands of White Minneapolis Police Officers, is not only discouraging; it allows for the rank and file of the NYPD to realize that we have no backing, no support from the command level in One Police Plaza and in City Hall.  What the future will look like is hard to speculate but all (or most) of us can recall the days when the first iteration of the Anti-Crime Units were formed and designated Street Crime Units back in the simmering cauldron of wide spread social unrest and crimes of every category were staggeringly high in from the late 1960’s and into the early 1980’s.

SMOKE IN THE AIR, BLOOD ON THE STREETS

The 1960’s will forever be known in American history as the most divisive, tumultuous, violent, and corrosive of our modern age.  While engaged in an increasingly misunderstood and unpopular war in Vietnam, the Civil Rights struggle spawned riots and events of civil and social disobedience that bordered on sheer anarchy.  The widening “Generation Gap” contributed to the vast disconnect between the  “Greatest Generation” and their children and grandchildren comprising the ever growing “Baby Boom”  The ugly triplets of White and Black populations living in hunger, grinding poverty, and neglect from, the inner cities of the north through the Mississippi Delta, Appalachia, and beyond becoming known via TV news lead many in the White audience to begin to examine their conscience and take a stand on Civil Rights.  While the last vestiges of an overtly “Jim Crow” South were bitterly hanging on, a “Black Power” movement came to be in the choked urban ghettos.  The most prominent and active of these groups were the Black Panthers and the Nation of Islam.  They disregarded Dr. Martin Luther King’s philosophy of “peaceful resistance” and “non-violent activism” and went on the prove far more militant than Malcolm X had been at the height of his influence.  Both of those men would lose their lives to assassin’s bullets.

The “Counterculture” was beginning to ascend from the suburbs as boys of draft age refused to reply, burned their draft notices in protest, fled the country for Canada, and began to engage in behaviors that their parents couldn’t understand and certainly disapproved of.  This was the genesis of the Generation Gap.  While their protests were largely more peaceful than those related to Civil Rights there were any number of high-profile skirmishes reaching a crescendo when Governor Jim Rhodes dispatched Ohio National Guard troops to restore order on the Kent State campus after 4 nights of rioting.  In 13 seconds, the National Guardsmen killed four students, wounded another nine, and leaving one paralyzed.  This event galvanized protestors from a wide range of issues.

These events were played out to a lesser and greater degree in the streets of New York primarily as a “declared war” on the NYPD issued by Black activists like Eldridge Cleaver, Louis Farrakhan, Huey Newton, and others.  They declared war and it was war they would be met with after several brutal Officer ambushes, assassinations, and murders.  This had all gone on long enough.  It was, as one seasoned Captain in the 34th Precinct commented, in a long-lost candid TV soundbite from a moment of sheer chaos on the front line, “now it’s time to take back our streets”.

WE RECLAIMED THE NIGHT

And so it was into this breech the Street Crime Unit was born in 1971. Initially formed as the "City Wide Anti-Crime Unit” it did not take long for them to make their presence known.  Operating in three member teams of plain clothes Officers they became a force to reckon with.  Often, they would use “decoys” to attract those with a criminal bent.  One Officer would lay on a bench in a subway station, a bus stop or park reeking of alcohol, appearing disheveled, and drunk; an easy target for the predators that roamed the night. The SCU patrolled the streets in confiscated taxis hoping an opportunistic thief would approach the cab when it was stopped at a red light.  Little did the scumbags know there were three Cops in the taxi and they were going to be spending some time in Central Booking.  The exploits of the Street Crime Unit are widely documented, their success still demands respect.  They were officially disbanded in 2002 in the wake of the controversial shooting of Amadou Diallo in 1999.

The SCU was reconstituted in 2002 and has been widely credited in the increasingly lower crimes that NYC has seen over the last two decades.  Their aggressive tactics and underlying strategy was largely based on the “Broken Windows” theory as employed by Mayor Rudy Giuliani and his first Police Commissioner William Bratton. The results, while controversial to some in the minority communities, were highly effective. Others in the most crime ridden neighborhoods of color were grateful that the NYPD was in fact removing dangerous offenders from the streets.  They welcomed the Anti-Crime Units presence. By the end of the sixth year of the Giuliani Administration NYC was unquestionably the “Safest Big City” in the United States.  The statistics were undeniable (see CompStat) major crimes across the board, in all categories were ebbing down to levels not seen in a generation. CompStat was not without its detractors both in and out of the NYPD but after the rank and file MOS saw proof of the decreasing crime rate many were sold on the concept.

The world of Law Enforcement is like no other “business”, for lack of a better word.  Construction workers take years to erect a structure, upon completion they move on to the next project.  Lawyers argue cases and, upon conclusion they move along to the next case, their next client. This most certainly not true in the streets that are patrolled by the NYPD, nor is it true in keeping the gains of lowered crime rates down.  It cannot be so.  It seems the most ardent supporters of wide-ranging, vast “reform” in Policing that it is a time to put an end to real Policing.

Is there room for “better” Policing? Sure. The Police across the country have to examine their practices and procedures, their hiring and training, yet never losing sight of the often gritty realities of Policing. New York City is a most diverse, disparate, densely populated urban environment as there is anywhere in the USA and abroad.  Once the smoke clears, the activists retreat rhetorically, and the tensions recede, the debate of how we Police, how our population is Policed can begin in earnest. In the heat of the current climate rational discussion about anything under the rubric of Police “reform” is simply not possible.

Until such time the men and women of the Finest Police Department in the world will show up to work tour after tour and do what it is that they do best.

Posted by Brooding Cynyc at 5:10 PM No comments: