YOUR WORK HERE IS COMPLETE


TIME TO REAP YOUR REWARDS 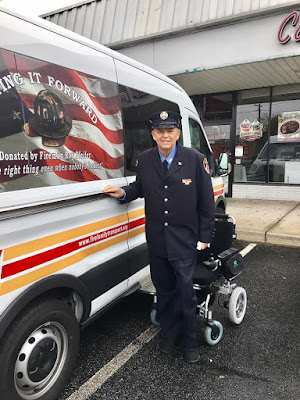 
9/11 COMMUNITY, A MODEST TRIBUTE TO THIS FINE AND DECENT MAN

(Tuesday May 30, 2017, WTC Memorial, NYC) FDNY Firefighter Raymond Pfeifer passed away on Sunday after a grueling 8-year battle with an aggressive malignant disease caused by his exposures to toxins while participating in the recovery efforts here after September 11, 2001.  A 27-year veteran of the FDNY, FF Pfeiffer like so many hundreds of his fellow Members of Service of the FDNY, NYPD, PAPD, legions of steel workers, operating engineers, demolition recovery experts, urban search and rescue teams from across the country, union tradesmen from the construction industry, and other recovery workers and volunteers  of all sorts, is but the latest casualty from that infamous day in 2001.  Many words have been and will be written about this man.  While his story is not entirely unique his own fight with cancer led him to fight on the behalf of others similarly stricken.  Pfeifer along with former demolition supervisor John Feal (who lost part of his left foot while working on “The Pile”) and founder of the Fealgood Foundation, took the fight for medical benefits coverage for “Ground Zero” workers to the corridors of power in Washington, DC.  They had to essentially shame the Congress into “doing the right thing”.  Their efforts paid off in 2016 when the Zadroga Act was permanently extended to provide health care for the approximately 36,000 people suffering from one of the 200 “approved related illnesses” who worked on The Pile until the site was cleared of wreckage in May 2002.


Yes, much has been said and written and more will be reported, said and written about Ray Pfeifer as he is laid to rest and afterwards.  His funeral will be attended by thousands, he will be eulogized and celebrated, respectfully interred and reverently remembered.  His name will forever be synonymous with the World Trade Center Health Program (WTCHP) and his legacy will stand the test of time and be measured in lives saved, illnesses treated, as well as his essential role in assuring the federal government’s despicably reluctant fulfillment of a moral contract they actively fought against.


It will be said that “words alone fail”, “no words exist to describe Ray” but there are words, words we are all familiar with, emotions and sentiments we share and can be spoken from a place of commonality; our shared struggles throughout the 16 years since our lives changed.  Our exclusive Community of 9/11 victims grows smaller with each death among us.  For each insidious pathological victory there will be a loss.  The inevitability of death, the fact that the path has been hastened, unnaturally shortened because of what we breathed in for all those months at The Site, The Pile, Ground Zero, by whatever designation one choses to call that hellish but sacred 16-acre plot cannot be denied.


We were all younger then, perhaps a bit naive’ regarding responsibilities as far as our City and government would see our illnesses.  From the moment on September 12th, 2001 that then EPA Director Christie Todd Whitman declared the air at the still smoldering cauldron of Ground Zero was “safe to breath” and “posed no serious health risks” some of us questioned the validity of such a definitive declaration.  Common sense alone told us that it just couldn’t be, that there had to be something wrong with breathing that particulate-matter laden air.  But we are all far too familiar with that story, the stories of lives cut short, many from exotic, highly aggressive malignancies that initially perplexed much of the NYC medical community.  Sadly, too many of us learned the hard way.  But, from this vantage point as we prepare to put one of our own to rest, that is not the story that needs telling anymore.


If every cause needs a name and a face, Ray Pfeifer became the very public face of the disease ravaged segment of the 9/11 Community.  It was not a role he ever sought nor a cause he initially thought would be so complicated and protracted.  But he allowed us all in for his fight.  From his numerous hospitalizations and treatment protocols he permitted us to see what is normally a very private process.  Along the way our cause became his and his fight ours.  Even for the tens of thousands who never met the man, shook his hand, drank a beer with him, he emerged as familiar as a neighbor, brutally honest, courageous in his struggle, rarely seen without a smile.


On Thursday and Friday, the populations of the Nassau County communities of East Meadow and Hicksville will soar exponentially as thousands descend to these locales for the Wake and Funeral, respectively, for FF Ray Pfeifer.  It will be, as all FDNY funerals are, a stirring tribute and solemn farewell.  For each attendee there will be dozens more who will pause to remember this man.  Yes, there are words to describe Ray Pfeifer, simple words, no too easily manipulated analogies.  Ray was a fine and decent man.  A devoted husband and father.  A NYC Firefighter.  A Proud MOS of Engine 40. Ray will forever be Honored, Remembered, and Respected for his Service and Sacrifices as well as for all he has done for so many.  Heaven is a better place today.  Be at peace, Sir.  Your work here is over.

Posted by Brooding Cynyc at 10:30 PM No comments: