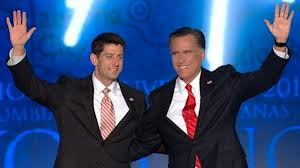 Romney & Ryan: Not an honest bone or original idea between them

(Tampa, FL – Sept. 1, 2012)  A truly remarkable event was televised from the Tampa Convention Center this past week.  For three days and nights the Republican Party held their quadrennial presidential nominating convention.  Whether you caught just the one hour of network coverage nightly or sat through hours more of the cable outlets never ending broadcasts, you could be forgiven for mistaking what you were watching for something other than a major political Party’s convention.

If not for the graphics, imagery and commentary one could have easily thought they were watching some sort of bizarre assembly of some of the ugliest people representing each of our 50 United States and territorial possessions.  Others may have been under the impression they were viewing a gathering of cranky AARP members.  As the TV cameras scanned the delegates and on-lookers in the arena the proliferous display of age and sun spotted wrinkled faces, turkey necks, wattles, double and triple chins, ill-fitting dentures, hairy ears, fossilized women wearing hideous outfits, brutal hairdos and Mommy Dearest lipstick was stunning.

Even those not yet collecting Social Security, on Medicare or spending a huge chunk of their retirement nest eggs on incontinence paraphernalia and Beano Plus seemed to be depressed, erectiley dysfunctional, frigid, unsatisfied MBA’s from half assed colleges preoccupied with paying their therapists, ChemLawn, children’s oboe lessons, gym membership bills atop their third mortgages on the once trendy now dated suburban homestead with aging Volvos, Beamers, Hummers, and faux wood-sided Mini Vans in the driveways.  Yes, this younger GOPer appeared to be the kind of middle manager, bullying school board member, condo association president, and sanctimonious church deacon with an Internet porn addiction barely concealed from a prescription pill addled wife you would most want to smack in the face with a greasy salami.

Oh yeah.  This crowd sat smugly yet hemorrhoidily self-satisfied and comfortably superior as one pompous buffoonish blowhard after another took to the podium to deliver their personalized version of the same shitty speech.  It was overall a surreal spectacle, an unprecedented display of all that is wrong with the politics of today and with the Republican Party in particular.  No, they haven’t a monopoly on arrogance and an inability to govern effectively but they surely have a lock on being able to lie to the American public without the blink of an eye.

The average American whose typical night of TV viewing was suddenly interrupted and preempted as the networks aired the “prime time” 60 minutes each night who does not follow politics as closely as some among us and is not yet fully engaged in the upcoming election, could be excused of they thought they were suddenly watching some new, over the top, cockamamie, garish, reality show perhaps titled “Who’s the Biggest Asshole” or “Hey, I’m just Pissed Off”.

Yes, indeed, it was quite a pageant of hostility and bass partisanship where the one most important missing element was truth.  Mitt Romney and his goofy looking sidekick, Paul Ryan, really believe they can run for the top jobs in the land without ever once offering an original idea, a viable solution to one of our Nation’s many problems, or detailing any specific substantive policy initiative.  Glaringly hollow platitudes and vague uninspired rhetoric may have allowed Mitt the Twit to buy his way into his Party’s nomination but he may get the gel knocked out of his hair as the media scrutiny over the next ten weeks becomes more intense as well it should.

It was as sickening as it was distressing to listen to speaker after speaker lambast President Obama, repeat blatantly dishonest accusations, misrepresentations, criticisms, bilge, bile, and bullshit night after night.  To base an entire campaign on the “Vote for me because I’m not him” strategy is as crass, shallow and as desperate as a political Party, campaign and weak candidate can get.  If people, a large number of people, do not begin to pay attention to the issues and recognize the stakes involved in this election, the results for all of us could be disastrous.

Posted by Brooding Cynyc at 1:30 PM No comments: