US SUPPORT HAS BOLSTERED CURRENT REGIME FOR DECADES 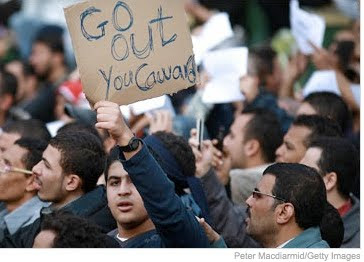 
(January 29, 2011 - NY, NY) Last Tuesday night as President Barak Obama, stood before a joint session of Congress and the American people delivering the annual State of the Union address, half a world away one of our oldest “allies” in the Middle East, Egypt, was beginning to feel the rattle and hum of a populace fed up. By today the rattles and hums have exploded into full blown revolt with the very real threat of being able to bring down a government.

After 30 years of tightfisted rule over the largest Muslim Nation in the world and respected by all Muslim countries for their place in world history, President Hosni Mubarak has unleashed his police and military forces to quell the increasingly vocal, unruly and, in some locations, violent protests. It appears that a “tipping point” may have arrived for Egyptian frustration with their government and the social ills that Mubarak has done little to address since becoming President in 1981. He succeeded Anwar Sadat who was assassinated shortly after normalizing relations with Israel in the famous Camp David Peace Accords brokered by then President Jimmy Carter making Egypt the first of Israel’s neighbors to recognize her tight to exist.

Mubarak, a crafty international figure and consummate Washington inside has long enjoyed extremely close relationships with the United States and our Presidents. In some cases the relationships Mubarak used to his advantage were more than diplomatic - they were personal as with the Bush family. On average the United States provides Egypt with almost $2 billion annually in financial and military aid. As with so many other Middle East nations who repress their people, the ruling regimes have been so heavily reliant on the United States that it can be said such regimes would not have lasted this long without the direct aid of the United States. Now, Egyptians seemed poise to oust Mubarak and make an effort towards some form of self determination and a more “democratic” form of governance.

While most Americans would have been hard pressed to locate Tunisia on a map a few weeks ago, it was in that northern African country where a very similar uprising by millions of frustrated Tunisians led to the toppling of the long time regime there. In Middle Eastern nations from Yemen to Syria, Iran and Lebanon, grass roots protests are threatening other US backed, long time regimes. So, what does it all mean? What has this got to do with us?

The answers to these questions are not black and white and, at this point in time, extremely difficult to even speculate on due to the fluid nature of the events in Egypt which is the current and perhaps most unstable epicenter of what are secular expressions by long suffering people; the millions upon millions who want unrestricted entry into the 21st century.

A report released earlier last week noted that the world wide Muslim population is increasing at twice the rate of the non-Muslim world. We already know about the “youth bubble” in Muslim countries where the bulk of their populations are under 30 years of age. These might be ominous signs for the rest of the West and America in particular depending on how the Obama Administration chooses to navigate the roiling waters in an already unstable region of the world that does, whether we like it or not, is vitally important to our national security concerns. The apparent intractability of the Israeli - Palestinian issue has always made the Middle East a powder keg. Now, with the rising tide of discontent and open, hostile rebellion taking on a viral component, President Obama must make some very difficult decisions regarding who are “true” allies are in that region and just how long we can remain “loyal’ to what are essentially American backed leaders who have done nothing to address the endemic ills of their own countries. Despite the billions of US tax payer provided financial support we have thrown into these countries for decades, we are learning the hard way that America’s voice does not carry the clout, moral authority or authenticity it once did. Muslim, the proverbial “Arab Streets” from Cairo to Tunis has no trust that the United States can or will do anything to really support their efforts other than offer hollow, token, tired rhetoric they’ve all heard before.

The “global economy” just barely showing some signs of having been resuscitated after the near collapses from 2008 until now is already reacting negatively to the unrest in Egypt. We have been militarily involved in Iraq since 2002, engaged in an escalating, odd and hazardous game of chicken with Iran regarding their nuclear ambitions among other things, and have vocal enemies spread across the region like clusters of chicken pox. Some are state-sanctioned players with terrorism ambitions while others, such as the Muslim Brotherhood, Al Queda and its bastard off shoots enjoy safe havens from Sudan, Yemen and into Iraq. When the US Stock Exchange opens tomorrow look for a tumultuous day as investors find the instability in Egypt generating a ripple effect throughout the already shaky global economy. One way or another, acknowledge it or ignore it, everything is connected. The happenings in Cairo, Egypt will, in some way or another effect the happenings, at least financially as in the price of gas in Cairo, Illinois.

In the wake of September 11, 2001, Americans learned the consequences of “blow back”. This is not to imply that the secular unrest in Egypt and elsewhere will once again bring radical elements with terrorist intents to our shores but, there is more than one way to impact a country, there is more than one way to inflict critical wounds on America in this all too connected world.

Hopefully the events in Egypt will bring about some positive, tangible changes for those long suffering 80 million human beings. Hopefully transitioning from brutal semi-dictatorship will not be the result of massive bloodshed. Maybe Facebook, Twitter, YouTube and the vast electronic / cyber landscape will be able to usher in a era of change using the power of social media, thoughts, ideals, words and free expression and take the place of the bullets, bombs, grenades and mortars of the last century. It would be fitting and just if this were to turn out to be so.

Let us hope, wait and see.


Copyright TBC 2011 © All Rights Reserved
Posted by Brooding Cynyc at 1:20 PM No comments: