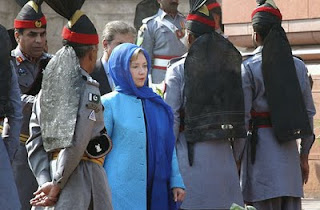 (October 29, Lahore, Pakistan) On a trip meant to improve our relations with Pakistan, our secretary of State, Mrs. Bill Clinton, took the opportunity to lambast the Pakistani government. In her most strident tone Hillary Clinton commented, "I find it hard to believe that nobody in your government knows where they are and couldn't get to them if they really wanted to," she said to a group of Pakistani journalists on her second day here. "Maybe that's the case; maybe they're not gettable. I don't know."

The United States has poured billions of dollars into Pakistan since September 2001 in the form of military and civilian aide. Then President George W. Bush sought the cooperation of then Pakistani President General Pervez Musharraf after the Al Qaeda attacks on America on September 11, 2001. General Musharraf had obtained the Presidency after a military coup in 1999. From the outset of our courtship of Pakistan it was widely known within the United States military and intelligence communities that the Pakistani government was rife with corruption and was staffed by many high ranking officials sympathetic to Al Qaeda and the Taliban in neighboring Afghanistan.

The past eight years has seen an uneasy relationship between the U.S. And Pakistan. Over the years there have been numerous occasions where Pakistan has acted in direct opposition to our national security interests in our military efforts in Afghanistan. The Pakistani Intelligence Service (IIS) has repeatedly dropped the ball when tasked by the U.S. To engage Al Qaeda and Taliban elements along the rugged, mountainous border territory that constitutes the ill defined border between Pakistan and Afghanistan. The most notable failure of Pakistan as far as the United States is concerned was when they were expected to seal off the border at Tora Bora. Their failure to secure that region allowed Osama Bin Laden and his closest, highest ranking henchmen, as well as Mullah Omar, the leader of the Taliban to escape. Many in the U.S. Military and intelligence communities believed they escaped with Pakistani culpability if not overt assistance. One high ranking Pentagon official, now retired, speaking anonymously noted, “ The entire situation in Afghanistan would be dramatically different had the Pakistani forces cooperated with us instead of selling out and letting our enemies slip away. Bush should never have outsourced that mission to them and we should have had substantially more troops on the ground at Tora Bora. Unfortunately, Bush and his cronies had shifted their attention and all our military resources to his war of choice in Iraq. The damage done on both fronts was monumental.”

Given the rocky history with Pakistan, President Obama dispatched Secretary of State Clinton to meet with the Pakistani President, Asif Ali Zardari, to seek broader cooperation across a full range of issues. Pakistan is home to many important members of both Al Qaeda and the Taliban; this country remains a safe haven for radical Islamic fundamentalists of every stripe.

Clinton visit here was punctuated with several public events that exposed the often divergent interests between the two countries. In one public forum Clinton was challenged to defend the United States use of unmanned aircraft known as drones to seek out, locate, identify and kill members of Al Qaeda and the Taliban. In several recent drone attacks, the Pakistani's contend that many civilians were killed. "We are fighting a war that was imposed on us. It is not our war, it is your war," television journalist Asma Shirazi told Clinton. He continued, "You had a 9-11. We are having daily 9-11s in Pakistan."

Secretary Clinton had several nasty exchanges with government officials and civilians alike during her three days here. At a woman's issue oriented forum she seemed to take pleasure in her verbal assault on Pakistan and its population. She told the audience that “You should all be grateful we haven't bombed your entire pathetic country back into the stone age. Actually, since the majority of this god forsaken nation is presently still in the stone age, it wouldn't take much effort on our part. You should get your act together; get with the program, get educated, sanitized and civilized. Being here reminds me of being in Arkansas in 1982.”

Hillary's visit here got off to a rocky start. On Wednesday, when Clinton arrived, a powerful car bomb in a market in Peshawar killed more than 100 people, mostly women and children, wounding an estimated 200 others. One radical Iman who operates a religious school for young men in Peshawar told Al Jezeera, the Arab language news outlet, “we will continue our fight against the infidels. The United States has murdered Millions of Muslims, supports the Zionist pigs in Israel and continues to oppress our people. They will never know safety until, God willing, we kill them in greater numbers. This Clinton woman who comes here should be stoned to death for her disrespect of our Holy places and religion. God willing, she will die a slow, painful death. Praise Allah.”

One of the most contentious meetings came when Secretary Clinton met with a high ranking Muslim Cleric, Mullah Ali Shali – Wali Bingbang. She challenged Bingbang to “teach your students, your people, the true Koran not the bastardized version that you interpret as giving you license to kill Americans. You are basically an asshole creating another generation of terrorists, suicide bombers and illiterate warriors.” Mullah Bingbang became visibly angered by Clinton's rebuke and threatened to have her beheaded. Her cadre of State Department security officers managed to whisk her away to a safe place.


Copyright TBC 2009 © All Rights Reserved
Posted by Brooding Cynyc at 11:44 AM No comments: