MUCH TO BE LEARNED FROM RANDOM EVENTS
MANY QUESTIONS TO ASK 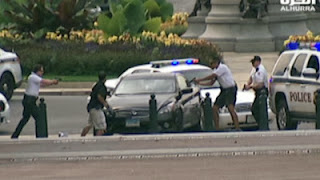 (Thursday October 3, 2013, New York City)  New Yorkers are familiar with the ubiquitous signs and billboards all over the buses, subways and streets throughout the five Boroughs with the saying “See Something, Say Something”.  It is this simple principal that enlists the vast population of New York City to be additional eyes and ears of the NYPD.  If any lasting alteration in the psyche of New Yorkers has occurred since September 11, 2001 it is the realization that they have an obligation to be ever vigilant, always alert for the unusual and atypical behavior they might observe  as they go about their business.  The See Something, Say Something campaign has proven to be valuable and, in some classified scenarios, successful.  If terrorists have taught us one thing it is the importance of the power of observation.  From the huge collection of information seized from Al Qeada and other related terrorist factions we have learned how adept they are in using careful observation in casing potential targets, identifying weaknesses in various security protocols in airports and other locations and parlaying their patient methodical study into lethal attacks.

As tenacious and creative as are our intelligence gathering and interdiction tactics are they are matched by the terrorists and their never ending quest to exploit any vulnerability they can here and abroad.  To believe that they have ceased seeking out novel methods with which to inflict tremendous damage, fear, and death on our soil is to deny the stark reality of the world today. Since September 11, 2001 we have witnessed brutal acts of terrorism in places from London to Madrid, Mali to Malaysia, Libya to Yemen and points between.  That we here in the United States and New York City in particular have not suffered another terrorist attack is certainly not indication that those malign forces and small cells have abandoned their stated designs.  The NYPD has interrupted at least 11 serious terrorist plots any one of which would have dealt a serious blow to our City and our sense of safety and security and likely would have claimed an unknown number of innocent lives.

WE FORGET, THEY LEARN

If we know one thing for certain about Al Qeada and their bastard offshoots it is that they do their homework and do it well.  We know that the terrorists who carried out the September 11 attacks had made several “dry runs” on early morning flights from the northeast to the west coast studying the flight crew and procedures.  It is likely that their careful rehearsals provided them all the intelligence they required to craft the details of their plot with the least amount of effort or margin for error.  They knew the flights they’d ultimately choose would be fully fueled and not many passengers would be onboard.  They identified what were at the time gaping holes in airport and airline security and they would likely not encounter much resistance from the early morning travelers.  When they USS Cole was bombed in 2000 while in the port of Aden those perpetrators and planners had scoped out the harboring procedures for United States warships using the docks for refueling and resupply.  Actually, it can be said that one of the most frightful hallmarks of Al Qeada is their meticulous planning and the ability to develop plans of attack that give them maximum advantage in this asymmetrical David versus Goliath struggle. They have proven to be adept at altering their plans, quick to adopt accordingly and are a tenacious devoted adversary.  There can be little doubt that Al Qeada operatives follow the news and social networks avidly.  Some recent events that have occurred here in the past 3 weeks have likely been of great interest to terrorists around the world.

On September 16th a mentally disturbed employee of a defense department contractor walked into his job at the Washington Navy Yard, allegedly one of the “harder” targets in our nation’s capital , opened fire with several guns he had secreted in prior to that day, and kill 12 people while wounding four others before he was shot.  Aaron Alexis had been a navy reservist and was granted a security clearance for his job with a technology subcontractor working on the internal military computer systems.  Alexis was widely known to have mental health issues and many of those who knew him recalled observing his behavior grow more erratic, paranoid, and delusional in the months leading up to his rampage.  What does this say about the level of security at the Navy Yard and all the other federal building, military bases, ports, airfields, and installations across the country?

In the early morning hours of September 30th two men were caught on closed circuit monitors parachuting into lower Manhattan just blocks away from the site where the World Trade Center Towers once stood, the New York Branch of the Federal Reserve Bank and Wall Street.  How did this happen?  Did they jump from a plane or perform BASE jumps as stunts?  Whatever the case may be and it is likely we will never know, it is more than troubling to realize these two individuals were able to penetrate what is arguably one of the “hardest” targets in New York City – the Financial District.  It stands to reason that if they did in fact jump from an aircraft they would have had to use some device such as a GPS app so as to avoid landing on a rooftop in that structurally dense neighborhood of Manhattan, the site of two previous terrorist attacks.  Is the airspace over New York City vulnerable to some sort of attack from a small private aircraft?  It certainly seems to be so.

Earlier today a woman from Connecticut drover her car into the gate on the east side of the White House, led law enforcement officers on a high speed chase before crashing her car and being shot by the responding officers.  How is this possible?  How did she get that close to the White House of all places?

While these events are in no way shape or form related – they are each random instances - collectively they make a powerful statement as to the quality of the security in some of the locations we would expect to be the most secure.  Have we already grown so complacent 12 years out from September 11, 2001 that run of the mill citizens with severe psychiatric problems can penetrate such important site so casually, so easily?  What must Al Qeada be thinking when they see these events taking place here and in Washington DC?

We live in a wide open society of 400 million diverse and disparate people.  There are far too many variables to account for even a fraction of the madness, murder and mayhem that transpires daily.  What we can do, however, is to remain ever vigilant in our fight against terrorism.  Isolated, unrelated events can teach us something and it is these lessons we must learn. Perhaps it was foolish to believe that we had already learned them; the events in the last three weeks stand as damning proof that we have not.

Those in the intelligence community often refer to the One % Doctrine meaning that terrorist only have to be successful once while we have to be successful in deterring, interrupting, interdicting, or capturing them 100% of the time.  They have infinite opportunities for grand slam type events as we have just witnessed last week at a shopping mall in Kenya.  Hopefully the powers that be will assess and analyze their security efforts and protocols with a more discerning eye given recent events that could have been much worse.  Having witnessed what “lone wolf” lunatics have been capable of we can only imagine what a terrorist organization such as Al Qeada with resources, personnel, determination, dastardly imagination and unbridled hatred towards us is learning from the news these days.