THE FLAG IS NOT THE ISSUE


IT’S A MATTER OF FREEDOM OF SPEECH 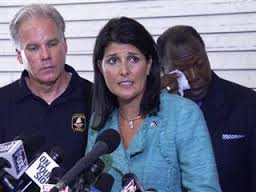 (Wednesday June 24, 2015 Charleston, SC)  As the families and friends of the victims of the fatal shooting of nine black parishioners at the Mother Emanuel AME Church here one week ago during a weekly Bible study meeting, their deaths have ignited a public/political debate focusing on what is being called the enduring symbol of institutionalized discrimination in the Deep South (and beyond), the Battle Flag of the Confederacy.  Here in South Carolina the Confederate flag flies on the grounds of the State Capitol while in several other states such as Georgia and Mississippi, the “stars and bars” are incorporated into the state flag. Long considered an emblem of defiance and rebellion not only in the former Confederate states, the flag remains an issue of great sensitivity to many and in particular African Americans across the country.  For those it is an insulting and offensive symbol of what they feel was the primary purpose of the “War Between The States”, keeping slavery legal in the South.

There is no small measure of irony in that a racist 22 year old’s individual psychotic hateful psyche led him to commit mass murder in a Black Church has resulted in prompting an Instamatic cultural and political debate over the Confederate flag. Dylann Roof, a lone disturbed, if not deranged young man accomplished in one bloody heinous act of violence what over 150 years of legislation, Supreme Court rulings, affirmative action, the Voter’s and Civil Rights Acts of the mid 1960’s, and a long list of other actions, initiatives, programs and policies intended to improve the lot for African Americans could not; the flag itself was being scrutinized not only for what it represents historically but also what it signifies today particularly among hate groups, white supremacists, and other marginalized violent movements.

Within hours of the deadly attack South Carolina Governor Nikki Haley announced that she would begin the effort to have the Confederate flag removed from the State House grounds but cautioned that the matter would have to be addressed by the South Carolina State Congress. Other states will face similar challenges in their own efforts to have the flag and other monuments, large and small honoring the Confederacy, removed from highly visible state government property.  The arguments pro and con each have merit but the entire issue ultimately can be reduced to a matter of Freedom of Speech, one of our most cherished constitutionally guaranteed rights.  The lower Courts and the Supreme Court over the years have protected what some group or another sees as heinous acts of expression invoking the Freedom of Speech as the shield providing such legal security.

In the week since the deadly shooting several of the largest retailers have announced they will no longer produce or carry in their stores items of all kinds that have the Confederate battle flag displayed.  A discussion has begun in Washington, DC about the propriety of some of the statues and painting adorning the corridors in our nation’s Capital, federally controlled public parks and other historical Civil War sites.  In states across the South buildings such as schools and local government seats of power that are named for noteworthy Confederate generals, early discussions to have them be renamed have begun.  Essentially some seek to have all traces of the Civil War no matter their nature banished from public sight forever.  Obviously this nascent discussion will open a virtual “Pandora’s Box” that will have each side of the argument deeply entrenched in their beliefs with little or no room for compromise.

We can readily concede that the Confederate flag is an offensive reminder of one of the most ignoble, infamous chapters of our Country’s history almost akin to the systematic genocide that basically eradicated the Native Americans who’d inhabited this land long before it was ever discovered by Europeans.  An entire civilization, an enormous population was killed off under the guise of “Manifest Destiny”.  That centuries spanning atrocity is the “original sin” of the United States.  The practice of enslaving Africans to work the fields in the Deep South and, for a time, in factories in the North, has left the unhealed wound of a legacy the repercussions of which are in evidence today; institutional and societal shadows of racism regarding Black America are alive and well throughout all aspects of life today.  The irony in this reality is that in this day of the second term of the first African American President racial discord and episodes of outright bigotry and racism have emerged with many of these instances brought to the fore in the media.  For many in the Black communities from coast to coast the imagery depicting their plight has been a well-kept secret from the majority of Americans, namely, White Americans.   The importance of these issues is certainly of greater significance than the question of the displaying of the Confederate flag.  Banning the public display of the flag is but a cosmetic gesture of a reactionary moment.  Flag or no flag African Americans still must confront overt and insidious forms of discrimination, racial profiling in some very limited aspects of law enforcement, and in White society at large.

The question that needs to be engaged by all Americans is the meaning of Freedom of Speech.  The Supreme Court has upheld the legality of many open forms of public expression that many find deplorable, disgusting, unacceptable and unpatriotic.  The burning of the American flag is a protected legal form of expression as are any number of signs, insignia, acts of civil disobedience, highly inflammatory rhetoric, and what some consider offensive behavior are just some of the acts of expression deemed to be covered by Freedom of Speech.  The flying of the Confederate flag is no less a form of expression, an act of Freedom of Speech, than any of the other questionable yet legal practices so common in public throughout the USA.

People of good will can engage in debate, politicians will take whatever the path of least resistance provides them political expediency in this topic of the Confederate flag but such pandering or divisiveness has little bearing on the reality of life in America in 2015.

The last 12 months alone have been crudely punctuated by episodes of young Black unarmed men being killed by White LEO’s.  While this is an entirely different discussion and one that the Brooding Cynyc has addressed here previously, the ease with which the wounds of racism have been once again been ripped open are tangible examples at how far the gulf between White America and Black America is in some jurisdictions.

An odd backdrop to race relations today is that Black Americans serve at the highest levels in government and the private sector.  The “pop culture” of today’s youth is clear evidence of the phenomenon known as the “Blackafiscation” of America.  From music to fashion Black entertainers, athletes, celebrities, and others prominent in the culture geared to our youth, have a huge impact on White youth.  This has been a trend that began more than 20 years ago and it shows no sign of tapering off.  Sadly, some of the most powerful cultural influences at work on Black and White youth focuses and glamorizes the worst aspects of inner city life; “Ghettoization” in many respects only serves to reinforce White adult’s worst notions about young Black men and, in many fundamental ways only further marginalizes them.  White kids can don the apparel of the “streets”, the “hood” but, once they take off those cloths they are White and do not face the same social challenges that Black youths do in attempting to gain employment and many other important facets of adulthood.

So for this latest moment in our struggle with race the Confederate flag is the issue du jour. Like racism itself it will not die a quiet, easy death; there will no doubt be vigorous debates and discussions and it will take a great deal of effort to have it and other “tributes” to the Confederacy eliminated from public property.  As the presidential primary season begins to ramp up late next month the flag issue will no doubt be used as a litmus test.  That might be a good thing since so often political primaries are such monumental wastes of time, money, and can profoundly alienate voters already apathetic to the concept that their vote matters.

We will see what we will see…