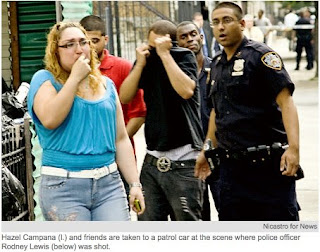 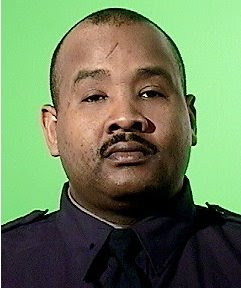 Police Officer Rodney Lewis of the 104th Precinct in Queens.


What Have You Got To Say About This One, Professor Gates?
Any Thoughts, Mr. President?

(July 26, Ridgewood, Queens, NYC) Shortly before dawn this morning NYPD Officer Rodney Lewis was shot while attempting to subdue an armed ex-con who failed to follow Officer’s instructions. The shooting was in the aftermath of a domestic dispute between a latino transgender woman, Hazel Campana (formerly Robert Campana) her current boyfriend Carlos and her former boyfriend, Edwin Santana. The 40 year old Officer Lewis is expected to make a complete recovery. A single bullet entered his chest via his armpit. The bullet was able to miss Lewis’ protective vest and entered his body through the armhole of his vest.

According to NYPD sources associated with the investigation as well as published accounts, Lewis and his partner, Mark Bublin, had responded to a 911 call reporting a domestic disturbance minutes before 5:00 AM. Hazel Campana reported she had been hit by her boyfriend after she accused him of stealing from her purse. She allegedly also phoned her former boyfriend, Santana, an ex-con, who arrived on the scene with a firearm. The firearm discharged as the Officers struggled with Santana who refused to stop when confronted by the Officers.

Santana is currently under arrest and remains in custody pending further investigation and charges. Carlos remains at large and may have possession of a firearm.

Perhaps the headline on this post would not be as it is if not for the recent incident involving the Harvard African American Studies Professor, Henry Louis “Skip” Gates, who is Black, and his arrest by Sergeant James Crowley who is White. This event has elevated racial tensions and its fallout has even reached the White House. According to a spokesman for President Obama, he is expected to have a meeting with Crowley and Gates at the White House in the near future.

The most newsworthy and important aspect of the event this morning in Queens is that a New York City Police Officer was shot in the line of duty. He and his partner were responding to a call about a domestic disturbance, often one of the most hazardous environments an Officer can enter. It is not relevant that the parties involved are a transgender woman and two Latino men who have or had been involved with her romantically. Officer Lewis is African American . These are just salacious details that have an almost comedic element were they not just the actual facts. The race, gender, ethnicity and sexual orientation of any of the involved parties played no role in what transpired. The Officers were carrying out there duties, protecting the public, intervening in a violent domestic dispute with probably little or no thought about race or anything other than the circumstances of the moment. Scenarios similar to this play out daily in the streets of our cities and towns. Call 911 and someone will respond. That someone will be a public servant willing to confront hazards and perils unknown no matter their race, gender, ethnicity or sexual orientation. These are but sidebar details to the larger situation; they typically do not drive cause and effect, they merely are what they are.

It is so very easy to loose sight of the larger whole, the bigger picture when trivialities that should be non issues come to dominate a story and fuel a debate. Much has been written and said about the Gates’ arrest and all its phoney racial motivations and reactions that the real issue, the things that really matter have become obscured in the torrent of opinions and blather.

Perhaps it was just a matter of time before a “racially charged” episode were to occur and our first African American President was forced to provide an opinion or render a judgment. In his remarks that concluded with his judgment that the Cambridge Police acting “stupidly” he entered a minefield he could easily have navigated more deftly. But, he spoke his true feelings at the time. A man of his position and intelligence, this man in particular, does not carelessly or cavalierly utter a word. His remarks are a clear and powerful indication as to just how far we have to go before the Black and White conundrum’s tentacles weaving through the underbelly of our society can be extricated or at least mitigated.