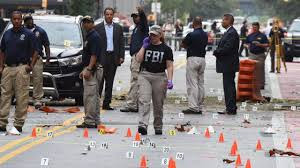 (Sunday September 18, 2016 NYPD Ops Center) An explosive device detonates along the route of a marathon benefiting the families of injured and killed-in-actions members of the US Marine Corps in Seaside Park, New Jersey close to 11 o’clock yesterday morning.  Approximately 12 hours later an explosive device exploded sending 29 injured people to hospitals.  This second blast occurred on West 23rd Street in the Chelsea neighborhood of Manhattan.  Another suspicious device, what appears to be a “pressure cooker” type bomb was located on west 27th Street. The NYPD removed this unexploded device to the Rodman’s Neck Bomb Squad HQ for analysis as hundreds of Police Officers and MOS of the FDNY scoured the neighborhood for additional devices. The commonalities between these three apparently “homemade” bombs are not simply in their construct and placement; they were all placed in public areas within a 35-mile (as the crow flies) radius from the Jersey Shore to Lower Manhattan. All three devices were placed in trash receptacles of one kind or another likely with the intention of turning the garbage can and dumpsters into flying shrapnel.  Such a primitive, essentially crude improvised explosive device (IED) is not necessarily about a “body count” although any death resultant of the explosions bolsters the perpetrators cause in fomenting terror in the purest sense.  The primary goal is the incitement of terror itself; planting the notion via bloody example that certain operatives are among us and can reach out and do harm at any place or time of their choosing.  That is the essence of a terror campaign.

We who inhabit the environs that constitute the New York City Metro Area are acutely aware that we live in a “target rich environment” as far as terrorist groups and lone wolf actors are concerned; the most densely populated and world renowned City in the United States.  We are no strangers to living with a bullseye hovering above our towering skyline.  Our landmarks and neighborhoods inspire a degree of coveting that terrorist are intent on attacking in any fashion or form possible.  Despite the protection and other services provided by the 34,000 MOS of the premier Law Enforcement Agency in the world, NYPD, complimented by an Intelligence/Counter-terrorism Bureau that surpasses the capabilities and resources of some countries Intelligence operations, this war is characterized by asymmetry; small cadres of terrorist and “lone wolf non-state actors” present an exceptionally difficult challenge.  The cat and mouse game, the hunt for the proverbial needle in the haystack oddly tilts the playing field drastically in favor of the terrorists; we, NYPD, have to be right 100% of the time while a single, isolated jihadi only needs to be right – effective – once to make his point and cause the ripple effect of fear and doubt throughout Our City.

Adding a level of depth and intensity to this environment, NYC will once again play host to the annual United Nations General Assembly (UNGA).  This large international meeting brings the heads of state from virtually every member nation of the UN to NYC.  The robust visible and invisible layers of security provided since 9/11 for such major world events will be further enhanced as a precaution in the wake of these three explosions. The timing of these IED’s has not escaped the attention of the NYPD and other federal LEA including the State Department Personnel Protection Service.  “We pray that no other incidents will occur today and everyday going forward but we must be aware of the significance of the General Assembly”, noted an NYPD Lieutenant just moments ago.  “but, you know, we do all we can to mitigate the possibilities.

REMEMBER THE “DOTS” UNCONNECTED IN 2001

Over the last 15 years and one week, we have all learned a great deal about terrorism, the firebrand extremists of the radical Islamic jihadi movement.  After years of blue-ribbon commissions, empaneled to analyze the intelligence and failures across the entire apparatus of our federal intelligence community, a host of Congressional hearings, countless well sourced and researched books, scholarly papers, journalistic investigations and more, our vulnerabilities, ineptitude, inefficiency; the gross lack of appreciating unconnected “dots”, the shameful lack of intelligence sharing between the CIA and FBI, for example, as well as myriad other glaring, fatal blunders, clearly demonstrate how the 9/11 hijackers were able to perpetrate their lethally brilliant heinous acts of mass murder on our soil.  Some of that sacred soil exists a few short blocks away from this hi-tech facility. As former NYPD Commissioner used to say with no small trace of irony, “This is the Ops Center that al Qaeda built”.

It is beyond comprehension that even before all available physical evidence, reviews of closed circuit cameras video, interviews with victims and others in the areas at the times of the blasts, that NYC Mayor DeBlasio has already said “it was too soon to say if the bombings were a terrorist act”.  The Mayor continued, “It was intentional, it was a violent act, it was certainly a criminal act, it was a bombing. That’s what we know,” he said, adding, “Was it a political act ... we don't know yet. …We will keep the public informed as we get real factual information”.  These statements are not only extremely irresponsible and grossly premature but fly in the face of some of the basic tenets of criminal investigations.  Just as physicians take the approach of “ruling out” the presence of various diseases in a patient who present with ill-defined symptoms, Detectives are taught to rule out various theories of mode and method of death in a Homicide investigation going so far as treating virtually every unwitnessed “suicide” initially as a Homicide until the evidence rules murder out of the realm of possibilities in any such individual case.

Given the inherent disadvantages of waging asymmetrical war there is no logical reason to justify not classifying, at least for investigational purposes, these three IED’s as deliberate acts of terror.  Three IED’s are discovered within a short radius of NYC within a 12-hour period of time is thought by some, including the buffoonish NYC Mayor as some sort of fantastical coincidence is simply ludicrous.  Downplaying the suspected nature of these devices and whose handiwork they might be in the press to “prevent public panic” might have some efficacy elsewhere but certainly not here among New Yorker’s.  We know the nature of the beast; we have looked him in the eye on February 26, 1993, September 11, 2001, and in many smaller-scale acts of terror.  We are largely adapted and learned to live with the ever-present threats just as we have mastered the art of “See Something, Say Something”. It was the practice of that simple principle, of enlisting the eyes and ears of each and every New Yorker that has been directly responsible for thwarting what were potentially disastrous terrorist events including a car bomb that was discovered in Times Square on May 1st, 2010.

In meteorological forecasting designations matter.  What may begin as a “disorganized tropical depression” far from the Gulf of Mexico may pick steam as it approaches landfall in the form of a hurricane.  Hurricanes are ‘organized” weather events with very clear and concise criteria.  Perhaps some measure of similar classification would make it easier for our spineless politicians including Mayor DeBlasio and New Jersey Governor Chris Christie, to call a spade a spade.

It is the height negligence employed by half-assed political hacks like DeBlsio and Christie to foment a line of deceit meant to shift the public perceptions from what they largely believe to the version of events the politicians want the public to believe. Speaking what they insist are the facts before all the facts have yet to be collected and analyzed may be motivated by some self-serving political purpose.  Some of the hacks claim that by NOT designating these events as deliberate acts of extremists’ terrorism somehow diminishes them in the minds of the perpetrators; that if they were to call them by their actual nature they would be providing “credit and advertising” for any like-minded actor or actors. In essence that argument is childishly inappropriate.  While the investigating Agencies already have as yet to be disclosed to the public solid information regarding the three IED’s, it is information that should be reported to the media in an objective and timely manner. Our security posture should be that we allow the terrorists to know that we know (or at least have a growing body of evidence) who they are and that we are on their trail.  Political correctness and the usual blather from our politicos serves no real purpose; certainly no beneficial purpose to us.

Here in the Ops Center the investigation is being directed and monitored on all fronts.  But, as usual since 9/11/01, “constant vigilance” is the operation, tactical and strategic imperative.  While there is already an impressive show of force out on the streets and at high-profile landmarks, and the UNGA will have a significantly “beefed up” security presence, there are far more extensive efforts engaged in beyond the view from the streets.  As one veteran Detective commented, “Sure, this could be the start of a larger effort but it certainly does have the potential to “inspire”, if you will, other like-minded zealots.  That is troubling but it has been a fact of our lives for 15 years now”.

That is a large component of Intel efforts today – mitigation.  Since prediction is nearly impossible we have to be finely tuned to mitigate.  And that we are.”

Posted by Brooding Cynyc at 6:01 PM No comments: