WHAT ARE WE MADE OF?

WE MAY SOON FIND OUT 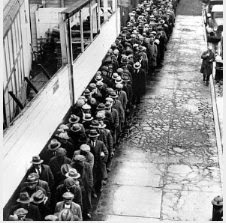 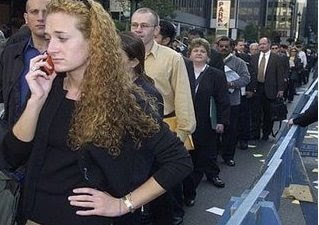 ( March 21, Bronx, NYC) They were called “The Greatest Generation”. What will history call us?

For those of us that are the children of those who grew up during The Great Depression, their experiences were transferred to us in many ways. We were taught the value of a dollar by those who knew what a difference a dime or a quarter had made when they were children. They imparted to us a work ethic because they knew how difficult steady employment could be to come by and what it was like to be grateful to work at all: there was more to be gotten from a job than a paycheck - there was the sense of purpose and self worth. Pride mattered despite the barriers pride too often erected.

From their habits, which may have seemed odd, we learned to prepare for ‘lean times’, to take nothing for granted, to never drift too far from the notion that security and prosperity are tenuous and often fleeting. We were shown what it was to sacrifice, to endure without complaint and to hope for better days. Our parents taught us to keep on keeping on because the alternatives were broken spirits, battered lives and the possibility of being down for the count.

They vividly remembered scrimping and scratching; improvising meals, clothing and courage. They never forgot what it felt like going to bed hungry, sleeping in a bed with their brothers and sisters to generate and share heat to ward off the bitter cold. Such experiences forged them in a common smelter, tempered them against uncertainties and the future yet, they also recalled redemption and respite delivered by Franklin Roosevelt and then they went off to war. They fought because they believed; on the home front they sacrificed because it was their duty. Common cause propelled them throughout and they emerged ready to build a nation - our nation - this place we call home.

As they got educated on the GI Bill, unleashed their victory fueled vibrant energy, they were the engines of industry, manufacturing and growth, inventing everything from suburbs to vaccines, goods of every kind. Their reward would be to provide for their children in a manner that had not been possible for them. They worked as hard as they could to provide a future to spare their children from the hardships that were their birthright.

They never forgot. They had never surrendered. They raised us right. Stoic, humble; ready and able, they were The Greatest Generation.

In many ways we succeeded as we did as a people and nation because of them. We largely avoided the circumstances they’d known and worked ever harder to build security. As they watched us grow so too they witnessed the unprecedented changes in the world around them. They felt blessed by our success and looked with wonder at grandchildren born into a vastly different world then that they’d known.

We are called Baby Boomers; actually , the aging baby boomers. Today we represent a huge demographic block caught between a proud accomplished past and a suddenly uncertain future. We thought we’d spared our children from hardship and, in so doing, we actually made them weak. They were weak because they simply didn’t have to be tough. They were born into that Brave New World and, they wouldn’t serve in the military thanks to a deceased draft and moms consciences. As we prospered our ability to provide for them seemed boundless. They wouldn’t have to get their hands dirty on the loading dock; they’d run the company.

Along the way we sensed a divide forming on our flank. Initially it was a vague feeling of increasing complexity that would give way to the collapse of our comfort zone. Things were moving too fast and getting faster. Suddenly it all wasn’t as knowable as it had been; it was all very complex and confusing. Just a generation removed from the cold water flat and the outhouse, we were in a wild, wireless world that left us confounded. Those who could adapt did, those that couldn’t had their children to educate them, to smooth the corners and round the edges. Thank God we sent them to college.

And now they are parents facing a future that guarantees nothing for their children. Security is again tenuous, tomorrow a worry.

How will they fair? How will we, for that matter? Subconsciously we never got too far beyond our governments betrayals. Viet Nam forever altered our perspectives; Watergate was a body blow to the collective psyche. If the tumultuous 60’s and 70’s tempered us in a new and novel way, we had to wonder what the 80’s and 90’s would do with our all too malleable children. We bit our tongues and hoped for the best. The best kept coming until it slowed. It is at a full stop now.

So here we are and there they are. It seems as if there has been a generational meld, the by product of our longevity and evolving circumstances. We are living longer than our parents and remain involved in profound ways in our children's lives far beyond what our parents had with us. We circle our wagons in this post modern downturn, angry with ourselves for our hubris, concerned with our children's naivety. “Are the good times really over for good”?

We’ve buried our parents but wonder what else we’ve interred with them. We have resurrected their vocabulary and have come to say “Wall Street” with their same disdain. As children we didn’t fully understand their stories of ‘runs on the banks’, ‘the markets crashing’, rations and shortages. Now we are learning for ourselves, not nearly to the degree they did, but as troubled all the same.

We feel duped in a way because we allowed ourselves to believe it would never end, that we would be secure in our long lusted after retirements, the advice we’d taken would certainly pay off. It was not the advice of our parents we’d banked on but rather the lure of the investment, the flirtation with a “cut above” personal prosperity and we slept easy as our 401k’s did their nightly magic as so many trillions of bytes coursed through the financial networks while we dreamt. Yup, we’d done all right, hadn’t we? But now, we wonder what happened.

We hear the faint echoes of our parents words, their words of caution, their ever present low grade doubt. Be careful, be conservative, there is nothing better than money in the bank; it has to be there for the rainy day, the hard times...just in case. But we knew better and our children knew so much better and now, look at where they are, where we are as a people and as a country stand.

The United States will emerge from this deepening recession that is really a depression. We will come out the other side of this crisis. We need to have patience now, patience while much of our personal security is shaken to the core. Perhaps this will be a defining time for a generation. It will not be the children of those who survived the Great Depression but rather their grandchildren who are carrying the load. How will they comport themselves collectively? How will we all navigate these troubled waters?

Maybe some measure of simplicity needs to be reintroduced into our lives. Complexity brought us to this precipice, steered disastrously off course by a select group of financial wizards whose arrogance set the stage for this collapse. Their algorithms failed, their elaborate computer models were crafted out of the ether and the wealth created in that nebulous realm vanished faster than a deleted message. What worked in the safe confines of the economics department at MTI could not stand up to the real world, all its vagaries, all its turmoil and all its greed. The Laws of Probability are not as fixed as, say, the laws of Thermodynamics. Inherent in emerging networks, complexity and the probability theories the Ph. D’s on Wall Street thought they had mastered, they could simply not account for that most volatile, unpredictable of all variables - the human factor.

Now we will see what the human factor can do to find a new charted course. Resolve and vision are desperately needed as are so many other things that will never and can never be provided by our government.

The Greatest Generation met ever increasing challenge head on and triumphed brilliantly. Have we still got it in us? Is enough of their DNA expressed within the gene pool? We will see, yes, we will see.

Copyright TBC 2009 © All Rights Reserved
Posted by Brooding Cynyc at 12:40 PM No comments: