WANT TO ICE FISH? LEARN HOW TO ICE SWIM FIRST 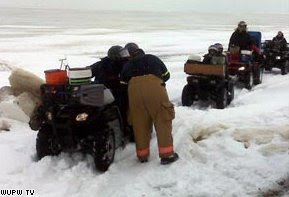 (Feb. 7, Oak Harbor, OH) A group of 140 obese, barely literate, intoxicated ice fisherman were rescued today after being stranded on an 8 mile long ice floe on Lake Erie. An unseasonably warm day along with steady winds from the south were factors creating the ice floe that broke off from the larger 16 inch deep ice pack that hugs the south shore of Lake Erie. One of the fisherman died of an apparent heart attack after falling into the freezing waters.

The United States Coast Guard, and numerous state, county and local first response agencies participated in the rescue effort. Some of the stranded imbeciles were plucked off the floe by helicopters, others were ferried to safety in various water crafts. The rescue unfolded over the course of several hours earlier today.

This and several adjacent coastal locations are popular with ice fisherman and, due to the thickness of the ice this year, more and more fishermen have been frequenting the area.

The fisherman began arriving on the ice in four wheeled drive vehicles laden with fishing gear, beer, bratwursts and beef jerky in the predawn hours. Several reports indicate that a weak spot in the ice pack developed after several extremely drunk fishermen urinated simultaneously at one point on the ice. “The warm urine created a fault line of a sort in the ice that allowed the huge ice floe to break free” said Dr. Arnie Blatterspladt, a Professor of Hydroscience and Ice Dynamics at Ohio State University. “We understand that some of the pissers were very fat and drunk. Studies have proven that fat, drunk fishermen can discharge urine at over 290 pounds per square inch (PSI). It is safe to say that these drunks created what essentially became a pissburg”, added Professor Blatterspladt.

Many of those stranded were members of the United Auto Workers Union (UAW) who had recently been laid off from various manufacturing plants were they work producing low quality automobiles in Ohio and Michigan. A large Winnebego owned and operated by the AFL-CIO was also out on the ice. The dying labor union was conducting a membership recruitment drive and was giving away free pretzels, perogies, Dale Earnhart caps and cheap vodka to the fishermen.

Aside from the estimated 134 overweight men out on the ice, there were tons of equipment they had brought along with them as well. This particular brand of asshole doesn’t travel lightly; they use over sized, expensive four wheel drive vehicles towing heavy, poorly loaded trailers carrying snowmobiles, kegs of beer, barbecue grills, satellite TV’s, Port-A-Potties, cigarettes and other assorted junk food and crap the fishermen refuse to travel without. Some erect small “fishing houses” which can be heated. A few of the more elaborate portable structures contain microwaves, Fry-Daddys, Crock Pots, spittoons and Lazy Boys.

Ralph Krapinski, a welder at manure tank plant in Sandusky, told reporters after he was lead off the ice, “I been fishin’ this spot since my grand daddy was a boy. I knows this ice and these fish. I ain’t never had a problem out on the ice except the time my ass got froze to a bucket we was usin’ as a crapper. Goddamned that hurt, but, at least we didn’t need the Coast Guard.”

Immediately after the rescue was complete a strong backlash was expressed by members of local professional and volunteer rescue departments. “As if our jobs aren’t hard enough, we have to go chasing after a bunch of brain dead assholes who want to go playing out on the ice. They should all be put in jail...in the same cell...for a week”, commented a very angry Captain Wilfred Hoyt Perblrkjya, Chief of the Maggott Point Consolidated Rescue Squad. “These goof balls should have known better. It’s that simple. Thank god none of our guys or any rescuers were hurt. Fucking weekend warriors”, added Byron Jarnxzs, a volunteer with the Oak Harbor Fire Department.

Copyright TBC 2009 © All Rights Reserved
Posted by Brooding Cynyc at 4:30 PM No comments:

JUSTICE IS IN THE EYE OF THE BE-HOLDER 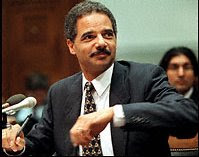 During his senate confirmation hearings,
Holder was asked to imitate a chicken.

Eighth in a series examining the Obama Cabinet


(Feb. 3, Washington, DC) Eric Holder was sworn in today as the 82nd Attorney General of the United States. Holder received Senate confirmation by a comfortable margin even though he was expected to have a tough grilling during the confirmation hearings. Mr. Holder was involved in several high profile controversies while working in the DOJ during the Bill Clinton Administration such as the FBI raid that seized Elian Gonzalez and the Presidential pardons of members of the Puerto Rican radical group, FALN, and Mark Rich, a big time Clinton donor. Holder presented himself well during the hearings explaining his position on the legality of torture and many other Constitutional issues from the Bush Administration. He may have to decide to charge Bush and others with war crimes in the future.

On the same day that saw two other Obama Cabinet appointees have to remove themselves for consideration due to personal tax problems, (Tom Daschle and Nancy Killefer, the President's picks for Health and Human Services Secretary and Chief Performance Officer, respectively) the Holder swearing in was the bright moment in Obama’s day. “Eric has my full faith and confidence and he will restore impartiality and respect to the Department of Justice which was severely tarnished during the Cheney - Bush Administration. He is also capable of imitating many barnyard and domestic animals. He’s great fun at a party”, commented President Obama.

AG Holder will be put to the test very early in his tenure as he and his Department are expected to deliver what will be the first of many opinions on matters of national security, domestic surveillance, and torture within the next month. Any appearance of partisanship in his opinions will certainly escalate the already partisan environment evidenced in the Capitol thus far into President Obama’s term.

Mr. Holder is the first African American to serve the nation as Attorney general.

Copyright TBC 2009 © All Rights Reserved
Posted by Brooding Cynyc at 6:30 PM No comments: