THE BALTIMORE SIX: PROSECUTION, PERSECUTION OR PACIFICATION FOR THE PUBLIC?


SIX BPD OFFICERS INDICTED FOR THE “IN CUSTODY” 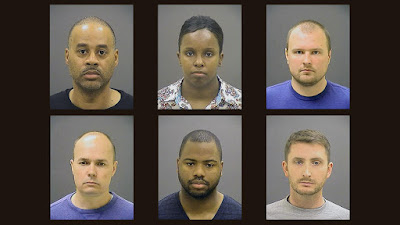 
PROSECUTORIAL OVER REACH AND CONFLICTS OF INTEREST, SEEKING REAL JUSTICE OR PACIFYING AN ANGRY


PUBLIC ?, THE REALITY OF POLICING IN HOSTILE COMMUNITIES, PROSECUTOR HAS ALREADY CORRUPTED HER CASE,


“FAIR” TRIAL NEAR IMPOSSIBILITY IN BALTIMORE


(Thursday May 21, 2015 Baltimore, MY)  A Baltimore Grand Jury decided today to level indictments of the six Baltimore Police Officers alleged to have been responsible for the death of Freddie Gray, a 25 year old they had arrested last month who died while in Police custody.  The indictments, such as they are, ranging from misdemeanors to felony depraved heart homicide, came as no surprise given Marilyn Mosby, the Baltimore State Attorney’s announcement made just days after a week of protests and demonstrations that saw several nights of violent rioting, that she would seek such indictments.


Less than four months into her reign as the State Prosecutor for the City of Baltimore, 35 year old Marilyn Mosby has found herself confronting an arduous task.  Before the Baltimore Police Department (BPD) has concluded their own investigation having assigned over 40 investigators, forensics specialists and crime scene analysts; even without the results of the preliminary official autopsy finding having been made known to the lawyers for the plaintiffs and defendants, Mosby announced her intention to indict  six BPD MOS during a hastily arranged press conference on Friday May 3rd. Her announcement was riddled with many of the same phrases employed by protesters some of whom participated in criminal activity during otherwise peaceful demonstrations; Mosby’s announcement was a biased, litany of charges against the Officers based on scant forensic data and absent the final autopsy report at the time. While the BPD was conducting a sweeping investigation of the episode with over 40 investigators assigned to that detail, Mosby came to her conclusion to seek Grand Jury indictments after having four investigators report back to her in less than 24 hours.  She neither consulted with nor informed the BPD Chief Anthony Batts that she was poised to make her announcement at a press conference until “about ten minutes before”, according to Chief Batts, she stepped out in front of the wolf pack press.  It was grossly obvious she was choosing to indict to pacify the radical element in Baltimore; parroting protestor’s language was a clear example of just how unqualified and inherently biased Ms. Mosby is.  She amateurishly proclaimed that she “heard the calls for justice” and was prepared for “an aggressive prosecution” of the Officers allegedly involved.


During that May 3rd press conference she repeatedly commented that she has “heard the voices of the protestors” and is aware of their “anger and frustration”.  She made so many inappropriate statements that she might have just admitted her indictments were meant to pacify and quiet the vocal throngs expressing their anger peacefully as well as those who opted to riot, burn and loot destructively.  Her announcement is being classified as one of the most “unprofessional”, “weak”, and “shoddy” criminal indictment many legal experts have ever seen.  Without realizing it she has already so drastically corrupted her “case” beyond repair and if she will not recuse herself the Governor of Maryland or the State’s Attorney General should take the proper measures to remove her from the prosecution of this complex, volatile case that has garnered national and international attention.


Many prominent legal scholars, former prosecutors and criminal defense attorneys have lambasted Mosby for her “rush to judgement”, the subjective nature of her argument to indict and the host of conflict of interests that engulf her.  She is married to Nick Mosby the Baltimore Councilman in whose district the Freddie Gray episode transpired.  She has close ties to one of the attorneys representing the Gray family, Billy Murphy, and he was a financial contributor to her campaign for the Office she currently holds.  Her objectivity must be questioned given her years long affiliation with various community activist groups and other organizations in Baltimore.  It is very difficult to imagine how she can conduct a legal proceeding given her subjective history in matters addressing the alleged disparities in the criminal justice system regarding young Black men.


By the very nature of her elected Office, State Attorney Mosby as a sworn Officer of the Court is bound to conduct her duties in strict accordance with the body of law that governs our criminal justice system and jurisprudence.  She is mandated to be as objective in her pursuit of justice and has the burden of proof; she needs to present her cases and prove the particulars of each indictment beyond the scope of “reasonable doubt”.  By her public statements it appears that she has already corrupted her case to such a degree that a fair prosecution of the indicted Officers is not possible.  In her youthful zeal, inexperience and misuse of her “public platform” she seems to have not only grossly mishandled the “case”, but has also set the stage for a mistrial at best, having all charges against the Baltimore Police Officers dropped at worst, if her prosecution ever even makes it to trial.  The range of charges against the Officers alone will strain her ability to present arguments that go beyond the burden of proof.  The Officers need not “prove” their innocence; Ms. Mosby needs to prove their guilt and, for Officer Caesar Goodman the driver of the Police van transporting Mr. Gray, the charge of “depraved heart” second-degree homicide is the most serious and will be the most challenging to prove. Actually, as many legal experts have commented, all of the charges will be very difficult to prove beyond reasonable doubt that is, if the empaneled jury functions objectively which is debatable given the publicity attending these indictments.


Compounding matters even further is the fact that the controversial arrest and in custody death of Mr. Gray did not occur in a social vacuum; his death is just the latest in a sad litany of unarmed African American men who have allegedly died by the hands of Police Officers in the last year or so.  The inherent difficulty, some say impossibility, to adjudicate a “fair trial” for the Baltimore Officers, will necessitate Ms. Mosby’s ability to divorce Mr. Gray’s death from what most in the African American community see as a systemic pattern of Police abuses, brutalities and disregard for “Black Lives”.  Six Baltimore Police Officers have been indicted specifically in this case but the broader indictment against the BPD as a whole and Law Enforcement Agencies (LEA’s) writ large will cast a heavy shadow over the proceedings in a Baltimore courtroom.


Despite this recent tragic rash of episodes of unarmed young African American men alleged to have died  as a direct result of some interaction with a Police Officer or Officers, there is no statistical evidence to support the claims made by activists and self-appointed leaders in the Black community, that the Police devalue the lives of people of color.  Many commentators and talking heads present anecdotal evidence as fact laying out numbers the source of which are dubious at best, blatantly contrived at worst.  The Department of Justice, the top LEA in the country, admits there is no truly accurate data collected, collated and analyzed from jurisdictions large and small that indicates the veracity of the claims made by members of the African American community regarding LEA’s impropriety in their neighborhoods.  Many have presented numbers as “fact” with no reference to the source of such numbers.  Clearly, the Attorney General and the Justice Department have a vested interest in the collection of actual numbers, of real data but, as they readily admit, there is a paucity in this area.  Given the number of public-police interactions on a daily basis across the country, the overwhelmingly factual record plainly illustrates for all to see that 99% of such interactions transpire without event or negative outcome.  The jagged edges of these unimpeachable facts are what sticks in the craw of those who expend their efforts to  portray each Police interaction with a Black or Brown skinned person, particularly young males, as an over reach of Police powers, racial profiling, endemic racism among Law Enforcement Officers (LEO’s), or an instance of aggressive bias.  Are there bad Police Officers; LEO’s who are racist bigots all too willing to be heavy handed and short tempered with young men of color?  Absolutely yes, there are.  But, the number of LEO’s who fall into that category represent an infinitesimally small number of men and women who wear the badge.  This fact is an untidy nuisance to those who hope to present their arguments otherwise.  That is their prerogative; they have the Constitutional right to express their sentiments, record the actions of Police Officers on their cell phones, protest and demonstrate for a contrary truth but, after the dust settles, after the last embers of a burning building in a riot zone are extinguished, the objective truths remain intact.


In many respects this argument can be distilled down to the bare essentials.  Most of the most bellicosely vocal opponents of the Police are far removed from the narrow concrete canyons of tough urban streets, densely populated housing projects, and the reality of street crime in all its many guises. While they may be earnest and well-meaning in their assertions and concerns about the Police they speak from distances that preclude them from some of the harsher realities of the streets.  Isolated and insulated from the “front lines” of the gritty, often violent aspects of Law Enforcement, they make their judgments based on preconceived notions and beliefs unabashedly ignoring the perils the men and women of the LEC put themselves in every time they suit up to go to work.  The profound misunderstanding between these two factions, the LEC and its detractors poses an unbridgeable gulf that is only spanned by irresponsible hyperbolic, inflammatory demagoguery.  In this climate no honest exchange of ideas and perspective is possible.


The fate of the “Baltimore Six” will be determined one way or another in due process and time.  Until that day life goes on, the ebb and flow of life on the streets awaits no vindication or validation.

Posted by Brooding Cynyc at 3:41 AM No comments: