Michelle Obama behind the counter


(March 28, Washington, DC) Hoping to set a positive example for the country as many continue to suffer during these hard economic times, the First Lady, Michelle Obama, has taken a part-time job in a local sandwich shop franchise. Mrs. Obama now works the lunch shift at the “Subway” here on Vermont Avenue. She was hired last week after hearing about the position while attending a Jobs Fair for the unemployed. Washington DC has been hit particularly hard during the current economic downturn and has a higher unemployment rate than the national average. Reportedly, Mrs. Obama is earning $7.75 per hour without health care benefits.

After her first full shift at the Subway was completed, Mrs. Obama met with reporters. “I’m delighted to have this job. I hope I will inspire other women, especially black women, to get out of the house and take a part time job. I enjoy what I’m doing and, I get to eat all the free subs I want. That’ a big plus. I don’t mind going home smelling like oil, vinegar and salami and the President doesn’t mind either’.

While it is commendable that Mrs. Obama is willing to work a mindless job earning a low wage, some have criticized her for taking a job that perhaps should have went to someone more deserving, someone more in need of job. When asked to respond to this criticism, Mrs. Obama said, “I think that I deserve this job as much as anyone else who applied. I graduated from Princeton, went to Yale Law School and certainly have made my share of sandwiches in my life. Not only am I qualified, I think I am setting a good example. If I can do this and do it well, that proves to many young girls, black girls, that they can do this too”.

The manager at the busy sandwich shop, Ike Freeman, said of his newest employee, “We are happy to have Michelle here. She’s a hard worker, very good with the customers and makes a mean turkey club. She is not treated differently just because her husband is the President although I do give a few free sandwiches to the Secret Service guys. I wish they’d just sit in their cars ‘cause they scarin’ some of my regulars away”.

Asked to comment on his wife’s new out of the house job, President Obama noted, “Well, you know, I’m pretty busy all day. Our girls are in school. Michelle should have a job to keep her busy and , given these tough times for all Americans, every little bit she brings home helps. Now, if I could just get her lazy mother to go out and get a job, life would be perfect.”


Copyright TBC 2009 © All Rights Reserved
Posted by Brooding Cynyc at 12:30 PM No comments:

(March 24, Lakeland, FLA) The Polk County school system has put their foot down; they will not tolerate malicious flatulence any longer.

On March 16th a school bus driver submitted to his superiors a “misbehavior form” reporting that one of his student passengers, an eighth grader, Jonathan Locke, had perpetrated a disrupting episode of flatulence while riding the school bus. Locke was subsequently suspended from riding the school bus for three days. This case is the latest in a series of disturbing outbreaks of public farting among Florida school children. Local school boards are actively developing intervention programs designed to lessen incidents of such menacing farting as well as to counsel the victims. “Right now we think this has got to stop”, said Dr. Hurl Clayton, president of the Florida Primary Education Association. Clayton continued, “While we may not be able to adequately educate or discipline our students, one thing we sure as hell can control is their obnoxious and noxious emissions of gas. I wouldn’t want my son riding on a bus filled with flatus. He gets enough of that at home from his mother.”

The Associated Press has obtained a copy of the bus drivers report which states, “... a 15-year-old teen passing gas on the bus on March 16 to make the other children laugh, creating a stench so bad that it was difficult to breathe.” The bus driver handed the teen the suspension form the next day according to the report.

The accused, Jonathan Locke, denied the raucous farting blaming the episode and fall out stench on a “kid that sits in front of me.” Local authorities were having none of it. Police Officer Hector Alonzo-Baaz of the Lakeland PD commented, “Yeah, that’s the oldest excuse in the book...always blame somebody else for farting. People that fart angrily, aggressively and criminally never own up to the fact that they did in fact fart. It never fails, they always blame another kid or a dog”.

The report emphasizes that Locke went on his farting spree in an effort to make the other students on the bus “laugh”. Tyrell Earl Lassiter, the union representative for Polk County school bus drivers told reporters, “Well, I for one do not think this is a laughing matter. The men and women I represent do not think this is funny. They already have to put up with enough annoying crap on their school buses that they shouldn’t be expected to tolerate incapacitating fart stench.”

Governor Charlie Crist has ordered the formation of a Blue Ribbon Panel to investigate the causes and effects of school bus farting in Florida. “This has been a silent but deadly problem for years. No one has wanted to discuss this blight on our educational system or take it on. Many of us have turned a deaf ear to the outbreak of distrurbing farting plaguing our schools and our nation. Well, those days are over. We will attack this and any manner of farting that is interfering with our children's education or transporting them to and from the places that we educate them.”

Some local child psychologists and counselors have expressed concern with the efforts school boards may take to staunch the flow of intestinal gas in the school system. Linda Murphy-Delgado, Ph.D., a world renowned expert on juvenile flatus warns, “I fear our students may become so frightened of being ostracized and disciplined that they will develop physical and mental disorders from suppressing their farts. What message are we sending our young children when we punish them for an involuntary bodily function? What’s next, will we then seek to eradicate burping, belching, yawning, snorting, hiccuping, and whooping cough? Where will this attack on body sounds end”?

Copyright TBC 2009 © All Rights Reserved
Posted by Brooding Cynyc at 10:56 AM No comments: 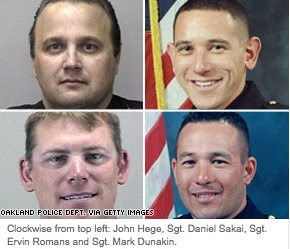 
(March 22, Oakland, CA) This is not a story about gun control, the failures of the criminal justice system or societal ills. At least it isn’t tonight. It is a story of four young men doing their jobs and paying the ultimate price.

This will become a political issue, a case-in-point for politicians of all stripes who, on any given day, could care less about the men and women who serve our communities. Death is an omnipresent possibility for cops. Any given tour could be the last. Circumstances yesterday put these men in a life and death struggle - death prevailed.

This is not about police tactics or budgets. It has nothing to do with poverty, civil rights, unemployment or drugs. These four men encountered a very bad man who decided he had nothing to loose; that is the most dangerous of men. This is not about his mental state or childhood. His life of crime is a footnote. This is a story about duty and honor, character and courage, right and wrong.

For most of the country this will be a one day story; on the Tv news today, gone and forgotten tomorrow. Journalistically, it just “doesn’t have legs.” No, the line of duty deaths of four policemen is not a big story. After all, they weren’t rich has-been actors who skied into trees, or famous hip-hoppers who beat their wives or even an individual who had eight babies. These were just policemen; nondescript if not anonymous. Their anonymity ended with their lives; they are unknown no more. It is good to see their photos. It allows us to remember that they were our neighbors and friends, coworkers and members of the PTO. Ordinary men often confronted by extraordinary scenarios.

Their families will grieve, their brothers will mourn. They will be laid to rest with full honors and the pain will remain raw for those closest to them. Survivors will survive beyond the TV lights and cameras. Lives must go on.

These men should be honored and remembered; their all too brief lives celebrated for who and what they were. Men like this are rare and the Good Lord always welcomes such men warmly.

Copyright TBC 2009 © All Rights Reserved
Posted by Brooding Cynyc at 8:20 AM No comments: