DEMOCRATS - A MAJORITY IN NAME ONLY 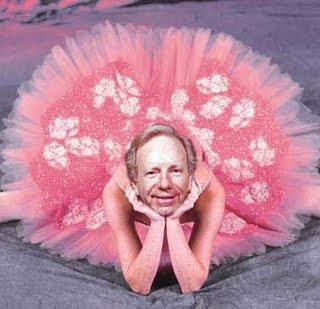 (November 6, Washington, DC) Americans have had the experience of learning a great deal about how our government works (and doesn't work) over the last few months. The “health care reform” debate which has been raging for most of the year reached its moronic, histrionic crescendo during the dog days of August's town hall meetings. Once the GOP misinformation machine got in gear and the special interest money began to flow in earnest, the “debate” such as it was, had forever been altered beyond recognition. The Republican efforts were aided by the hapless, spineless Democrats as well as a White House so enamored with the notion of bipartisanship that they literally sold out.

The summer heat laid bare for all to see the abject dysfunction that plagues the legislative process, the lack of character of our elected officials, the blatant role that corporate and special interest money plays as well as how the idiosyncrasies of the Congress can allow a few to hold the entire legislative process hostage. Indeed; we have learned more about why nothing that would substantively benefit the greater good can ever come out of the Washington DC of today.

We can see the shallow, self centered greed of our politicians; men and women who can never measure up to their predecessors. There was a time when Congress was populated by people of character, courage, a strong sense of duty, conscience and morals. Those people and those days have long since passed. What we have now is a collection of corrupt incumbents determined to remain in office despite all and at any cost. The concept of representing their constituents is as antiquated as are the days of civil discourse. Narrow self interest defines the motivation of virtually every member of Congress.

To say that this Congress is out of synch with the realities of the day would be a gross understatement. Enormous challenges confront us on every front from the economy to the two wars inherited from the Cheney / Bush Administration. One of the most intractable of issues that has variously been ignored and center stage over the last 50 years or so is our health care system's inability to function as it should. Far too many of us are without insurance coverage while those with health insurance are paying far too much for far too little. The system is and has always been tilted towards the insurers who call the shots at every level of the process.

Money drives the system and health care expenditures comprise a huge segment of our economy. The free market has reigned as patients have suffered; the quality of care you may receive will be directly dependent upon what type of coverage you have. Medical decisions are too often dictated by the insurers and, physicians greed, has helped fuel the sky rocketing costs associated with addressing acute and chronic conditions, hospitalization and treatment modalities.

But, we already knew all of this. What we have learned new, is that the insurance companies have bought and paid for a handful of Senators who wield disproportional influence on key Senate Committees simply due to seniority. That these people, some of whom have come to be known as “The Gang of Six”, represent a sliver of the population yet are positioned to shape health care reform in the image most advantageous to them and their corporate benefactors.

Let's call these people out; call them out for the corrupt scumbags that they are. While we're at it, let's not forget to call out the inept White House and our President too weak with majorities in both Houses of Congress the cornerstone of his domestic agenda. What we have sadly learned over these last few months is just how dysfunctional our system has become. This endemic, perpetual dysfunction is the direct result of the quality of those we elect. In a sense, to paraphrase the former Secretary of Defense, Donald Rumsfeld, we have gotten the government we deserve, not the one we wish we had.

We seen bailouts and handouts from Wall Street to Detroit. We've witnessed the collapse of the legislative process, the core element of our Republic, eroded by crass and callous scumbags whose only interests are to remain in office and reap the rewards of their powerful positions. It has been a long time since we have had a truly “representative “ government in Washington; by the people, of the people and for the people. 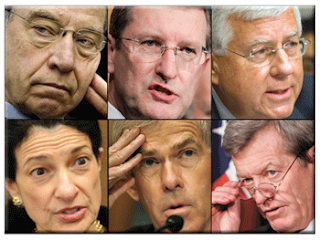 Despite a commanding election victory last November, President Obama's White House has refused to exert their full influence in the health care reform process. It appears the President made a staggering miscalculation when he set his sights on the concept of a truly bipartisan health care reform bill. He invested a great deal of capital and trust into men who were ill equipped to handle such trust responsibly. His miscalculation may cost him politically in ways he did not envision. Although Obama has stated that “if real health care reform makes me a one term President, it will be worth it”, his Administration has demonstrated an odd propensity for appeasement, placating and pacifying the carnival barkers on the Republican side of the debate.

Back in August during the absurd town hall meeting furor, eels like Chuck Grassley were out proclaiming loudly and proudly that Obama's efforts would fail. Crooks like Grassley were also saying that any Bill the size of the one needed to reform the health care industry should have a t least “70 or 80” Senate votes. Where did that come from? When has any legislative measure been expected to garner that sort of majority in the Senate? It was ludicrous on its face when it first starting filtering through the media coverage and became more bizarre as many of Grassley's cohorts echoed his position. Still the White House publicly stated that they were willing to do business with Grassley and the rest of the obstructionists; crooks all bought and paid for by the special interests vested in the preservation of the status quo.

Then, we can look at the likes of the so-called “independent” Senator from the insurance capital of the world, Connecticut, Joe Lieberman. Joe is the among the most cravenly self centered politicians of his or any generation. When Joe saw he was going to have a real re-election challenge in 2004, he simply dropped his Democratic Party affiliation and became an Independent. Since, the Democrats have allowed him to retain the Chairmanship of the Senate Homeland Security Committee. From this perch he looks after the interests of Israel above all else and the interests of his corporate donors. That this man was the Vice Presidential candidate of the Democratic Party in 2000 is almost unbelievable given where he is politically and who he is today. He said recently on Fox News Sunday that he will do everything in his power to block the Democrat's effort towards comprehensive health care reform.

For Joe, it is all about keeping the insurance companies content so they continue to feed his campaign coffers. This is the story for so very many, if not all of the Senators and Representatives serving today. Each time the Congress appears to slam into the basement of dysfunction they manage to find a new and lower low. There is no sign that anything about this inertia and greed will ever change.

Knowing this by now, the President and his Democratic majority in both chambers of Congress should craft and pass their version of health care reform including a strong “public option.” The public option does not represent a “government takeover” of the “entire health care delivery system” as the GOP and their corporate sponsors would have you believe.

Until the President begins to exercise his influence in a meaningful way domestically, he is doomed to fail. If his agendas fails it will be a failure for all of us; a failure we can ill afford to have inflicted on us. A good first step to establishing a tougher stance would be for the Democrats to strip Jew Lieberman of his Chairmanship – send the unambiguous message that such treachery will not be tolerated. The Democratic leadership should muster their caucus to pass the components of Obama's legislative initiatives they can and do so in the form and fashion that will have the broadest benefit to society. Now is the time for some real change and that change should first come in the form of brass balls: the majorities are there, use them and use them forcefully and wisely.


Copyright TBC 2009 © All Rights Reserved
Posted by Brooding Cynyc at 4:42 AM No comments: