“THE EAGLE HAS WINGS” 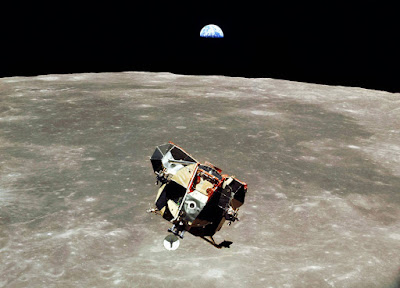 THE LUNAR MODULE, “THE EAGLE” CARRYING
NEIL ARMSTRONG AND BUZZ ALDRIN TO THE LUNAR SURFACE
50 YEARS AGO TODAY

(July 20, 2019 Washington, DC) It was a moment in time he’d never forget. The fact that today marks the 50th anniversary of that event renders him a little disoriented. But such is life. Memories remain fixed points that we drift further and further away from. Some lose their luster, others become murky or smudged over the years from pawing at them, handling them. Some never seem to change or become altered in any appreciable way. What transpired on July 20, 1969, is one such memory. The thought of men on the Moon has never ceased to amaze and thrill him.

He grew up with the Space Program, the famed “Space Race” between the United States and the USSR. Even as a kid he was aware that there was a military aspect to the entire endeavor. All the original Astronauts were military pilots. He saw that as a tribute to their abilities, character, and certainly their skills as test pilots accustomed to taking great risks and solving problems in experimental aircrafts. Actually, he thought everything about the entire endeavor that 400,000 Americans actively participated in fulfilling all the needs of the Program was mind bogglingly impressive. How could any young boy of that time not be infatuated and impressed? There were rockets and huge tractors, tremendous assembly buildings, lift offs, splashdowns, aircraft carriers, Navy choppers and divers and the achievements themselves. And, of course, there were the men; men whose names he’d never forget.

Growing up  in our Big Apple, he’d ride the subways after school to visit various construction sites. He was fascinated by construction, the cranes and bulldozers; the men who walked the high steel. He watched them excavate a huge hole in lower Manhattan that would become the “bathtub” that housed the foundations of the Twin Towers. The World Trade Center construction progressed as he aged, and he bore witness to it every day for almost ten years. He would later in life come to live within their shadows.

The whole notion of men going into space, orbiting the Earth in tiny capsules no larger than a 1966 VW van was beyond captivating to him. He could only try to imagine the level of bravery, the shear courage it took for these men to venture into the truly unknown. These men were testing theories with their lives at stake. Images of those many missions, the Mercury, Gemini and Apollo missions imparted in him a sense of respect for the military, for the skills of men who flew these machines, the minds that thought them up and the engineers of virtually every discipline, fabricators, technicians and mechanics who made them reality. Whatever was needed was built; it was that simple. It was the vastness of those minds, the novelty of their thinking and, in a way, the manner in which they made it seem so matter of fact - this is what we need to do, this is what we need to do it, so, let’s get on with it. NASA and all her subcontractors were powerful examples of that ill-defined “spirit” that men of his age today grew up with.

He was a boy of that time, a product of that age. The 1960’s, as he was coming of age, were filled with historic moments, tumultuous events that even his Dad could not totally explain. There was a war in a place called Viet Nam; Chet Huntley and David Brinkley reported casualty counts on the nightly news. There were long-haired, “peaceniks”, “hippie “college students downtown burning their draft cards; women’s libers burning their bras. There were race riots and he stood with his Dad and others on the rooftop of their South Bronx five story walkup and watched the angry orange flames in Brooklyn, Harlem and over in Jersey City and Newark. JFK, the first Irish Catholic President was assassinated and, not many years later his brother Bobby and, Malcolm X and Dr. Martin Luther King. Everything seemed bad, confusing. That may have been the appeal of the Space Program; it was so exciting; it was so ambitious and positive. These feats could make up for much that was not right and show a fresh glimpse of his Dad’s America.

There was nothing ‘off the shelf’, as it were: from the medical evaluations of the seven original Gemini Astronauts through every piece of hardware used throughout the history of the programs that culminated 50 years ago today. Literally every component had to be designed from scratch often based on ill-defined specifications with scant knowledge of the real or imagined hazards inherent in a 245,000-mile voyage through the harsh, unforgiving vacuum of space to the Moon. Engineers and scientists performed monumental calculations with only slide rulers and primitive punch card computing technology; far less computing power than there is in a common “smart” phone of today.

But, Americans had traveled this path, albeit in a far different pursuit, before. The Manhattan Project that delivered the first atomic weapons bore many similarities to the Space Program, but its mission was a finite proposition. Once the devices were proven to be what they only had been imagined to be, they were utilized to end a terrible war. The technology from that endeavor ushered in the “Nuclear Age” where nuclear power was harnessed for peaceful, power generating purposes. He was born as a member of the Baby Boom and, it would be many years later that the significance of his birth time would be fully realized and appreciated.

The Space Program dwarfed the Manhattan Project in virtually every comparable aspect. Actually, it was only after Tom Wolfe’s best-selling book The Right Stuff and the movie of the same name that the public learned some of the details of the earliest days, the very birth and infancy of the manned space flight program. Countless other books, documentaries and several movies have captured the drama of it all, the stupendous magnitude of what was unknown, unknowable and what had to be overcome to achieve the goals set forth.

Once the young President JFK proclaimed that “we will go to the moon in this decade, not because it is easy, but because it is hard” the  real race was on.

It rained in New York City off and on for most of July 20, 1969. That did not deter crowds from gathering in public places like Central Park, Times Square and other locales. He watched on a 15-inch black and white TV the landing of the “Eagle” shortly after 3:15 that afternoon and remained uncharacteristically glued to that TV set until well after midnight. Mom and Dad were as caught up in the moment as everyone else. It seemed miraculous. The Pope was on TV earlier that day offering prayers for the Astronauts. The entire world was watching.

The old timers in the neighborhood said the rain was caused by the launch itself. Some said that every time a rocket was launched it did something to the atmosphere that caused rain. It sort of made sense to him but it seemed trivial. These were, after all, the same old stoop sitters who said heat lightning was caused by the bombs we were dropping on North Viet Nam.

It was not until the next night that he saw the Moon again. Looking at it on July 21, 1969 knowing that two men had just been there, they had walked there, slept there, spoken to us all from there, gave the Moon a different character. We had been there. That meant something to him then as it does today.

Since that day he has read and studied the Space Program and NASA extensively. He satisfied his curiosities by reading only to find tangential curiosities that spurred the need for further reading towards a fuller understanding. The more he has learned about the manned space flight program from 1959 through 1972, the greater is his respect and awe for all of it, everyone involved in it and the fact that they succeeded in the face of incredible odds. He thought everything after Apollo was bullshit; he never watched a shuttle lift off, never cared about any of the post lunar years of NASA. Low Earth orbit antics were a parody of the NASA he grew up with.

He appreciates all the technological developments from the Apollo years that became integral parts of our everyday lives; novel materials like metal alloys, Teflon, Velcro, Mylar, to advanced communications, radar, navigation, and propulsion all made possible with the increasing understanding of the potential power of the integrated circuit.  It is impossible to overstate the progress made reality by the entire array of engineering and basic sciences advancements that were built upon, expanded and broadened to produce the level of technological sophistication we live with today.
The world at times seems too complicated to him; it has the feeling of moving too fast without getting anywhere. Tremendous knowledge and information are available literally at our fingertips yet, we as a culture, a society, as a people do not seem better for it. People are certainly not like they were in 1969. That makes him sad. But many things make him sad today. That is probably just the tendrils of a midlife crisis or simply the product of having lived this long.

He saw fantastic archival footage of Neil Armstrong, Buzz Aldrin and Mike Collins on TV today. They still have his utmost respect and admiration. What was it truly like for them on the surface of our Moon?

He still looks at the Moon with reverence and fascination; the same emotions that have drawn men to it since the dawn of time. It is our nearest celestial neighbor and we have been there. Somehow, that still makes a difference to him and, it always will.

Posted by Brooding Cynyc at 2:30 AM No comments: