“NOT IN MY BACKYARD”
KELLY OFFERS SOME ALTERNATIVES TO DAREDEVIL 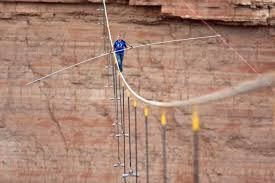 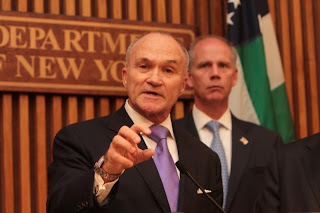 (Tuesday June 25, 2013, One Police Plaza, NYC)  Just days after Nik Wallenda, a seventh generation member of the famous aerialists The Flying Wallendas crossed a 1400 chasm over the eastern aspect of the Grand Canyon on a two inch steel cable with a worldwide television audience estimated at 50 million, the New York Police Department Commissioner, Ray Kelly, responded to comments Wallenda made immediately after his harrowing 23 minute skywalk.  The record breaking high wire walker who has conquered Niagara Falls among other famous sights with dizzying heights commented that he’d like to “do a walk in New York City…maybe from the Empire State building to the Chrysler Building”, a distance of almost 10,000 feet.

Ray Kelly, arguably the most effective and, by most polls, a very popular Police Commissioner, was not about to wait for a formal request from the Wallenda Team.  Speaking with reporters yesterday and earlier today he was adamantly opposed to the idea of such a stunt taking place over Midtown Manhattan.  Kelly commented on what would be “nightmarish” logistics that would require a significant swathe of Midtown to be “shut down” to protect pedestrians if Wallenda should happen to fall.  “We just can’t have it,” continued Kelly adding, “Since he is a daredevil and thrill seeker and I respect his abilities, I have a few suggestions he might be willing to consider instead of a high wire walk here.”

When pressed to elaborate Kelly said, “I can think of any number of neighborhoods, certain blocks, he might find very challenging walking alone in the middle of the night.  We have some apartment complexes where our Officers perform what are known as “Vertical Patrol” walking down the stairs from the roofs to the lobbies and interdicting whatever crimes they encounter.  It is often hazardous duty in some of the housing projects.  If he’s looking for a thrill well, he might get a bit more than he bargained for”.

Mayor Michael Bloomberg has his Commissioner’s back on this issue. He told a group of reporters that, “I’m concerned that some of our children might be inspired to do something like that and end up badly injured.  Since most of our children are Big Gulp chugging, junk food scarfing, chain smoking, out of shape imbeciles, I don’t think they need that kind of distraction.  I intend to introduce a Bill to the City Council that would restrict such activity in all five Boroughs”.  Bloomberg added, “If he really wants to pull off an amazing high wire act, perhaps he can help us balance our budget.  Now that would be a real feat.”

Not all New Yorkers shared the sentiments expressed by Kelly and Bloomberg.  Vinny Matenucci, a stone mason from Brooklyn said, “I’d like to see him walk from the Verrazano Bridge to the Statute of Liberty.  Now that would be a real f&*ckin' show".  Manny Rivera, an unemployed gynecologist from The Bronx commented, “If he’s such a bad ass, let him take the 6 Train Uptown around 3 O’clock in the morning all by hisself”.

As far as Team Wallenda is concerned they believe that eventually they will secure permission to make a high wire walk across one of the many imposing edifices in Manhattan.  Nik Wallenda, speaking to the press from a rented camper in Arizona said, “Praise Jesus…Praise God…Oh, God Almighty steady the thinking of Ray Kelly and the good Jew Bloomberg.  Yes, Mr. Mayor Jesus loves you too and He can set your judgment right just as, Praise Jesus, Praise God, He set my wire right on my walk in the glory of His name.   Let me walk with you Jesus, wherever you deem I am worthy to walk”.

At this point it appears that Willenda will not be allowed to perform a stunt in New York City.  NYPD Commissioner Kelly made an aside to the press as he was making a wobbly exit from the Blarney Stone on West 43rd Street saying, “I will not condone any Phillip Petit type of crap.  If he wants to climb a building, walk across a bridge or stick his thumb up his ass on a unicycle, my Officers will Stop and Frisk him and send him back to Sarasota Springs in a little worse shape than he was in when he got here. We have enough to deal with everyday without having a circus act take place overhead in Midtown. Is that clear”?