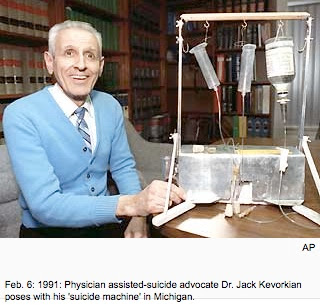 ( Saturday, June 4, 2011. Royal Oaks, MI) He was neither kook nor crank, criminal or quack. His quirks, eccentricities and unusual media moments aside, he was, more than anything a crusader. Dr. Jack Kevorkian came to define what was arguably the most heated and controversial medical ethics issue of the 1990’s. He died at age 83 two days ago in a suburban Detroit hospital.

Dr. Kevorkian, a retired Pathologist, first broke into the national conscience and media spotlight in 1990 after having assisted a chronically ill woman to die by utilizing a machine of his own design and construct which came to be derisively known as his “Death Machine”. His device allowed the “patient” to self administer a lethal combination of narcotics that would guarantee a painless and rapid death.

Perhaps the entire odyssey of Kevorkian would have played out differently today in this world so connected by the various social media that have the proven strength to topple governments, promote issues the main stream media ignores, and connect like minded people globally as never before. At the time he first drew national attention he was a “lone wolf” advocating a position which was poorly understood by many across the country and commonly wrongly defined by his opponents and the media.

Kevorkian did use the technology available to him at the time. He video taped long interviews with his “patients” and their families documenting their desire to “die with dignity”. Each of the deaths he assisted in was also video taped. Kevorkian proved to be equally adept at using the media to his advantage and once he retained the services of a flamboyant, opportunistic but shrewd Attorney, Geoffrey Fieger, he and his crusade remained on the public stage until he was eventually sentenced to prison in 2000. He served seven years of a possible 25 year term.

Before the human genome project was complete, prior to the promised potential of stem cell research, genetic manipulation and the other ethical issues that came about due to the incredible advances in all medical / biological disciplines, there was just Dr. Kevorkian and his passionate arguments for a person’s “Right to Die”. Even while he was lambasted in the press, caricatured, derided, and often had his sanity questioned, he never wavered from his central, core belief that a person can make a logical, rational decision to die and should be permitted to be assisted in their desire by a physician. He was extremely selective in choosing his “patients” employing a strict, objective criteria that left no ambiguity in his mind or the minds of those he assisted as well as in the minds of their families. He refused to even speak with over “99 out of 100 of those” who sought his services. His strict criteria accounted for a host of variables including the potential patient’s mental health status and a rigorous scrutiny of their medical records.

“Death (or) Dying with Dignity”. “The Right to Die”, “Physician Assisted Suicide”, are terms that became part of not only the debate of those days, but have been integrated into our American lexicon thanks to this one courageous man. And let there be no doubt about it, he was a very courageous man driven by the courage of his convictions and the frustration of having a very serious issue mocked, assailed or simply dismissed. It was easier to make fun of him than it was to honestly debate and discuss the very real, profound if not fundamental issue that he’d adopted as his mission in later life.

Perhaps what we as humans fear most about death is not the unknown or its inevitability, but rather that it will be painful, protracted and we will find ourselves in a position of being trapped in a body, conscious of what is going on around us but unable to communicate with that world around us. Those suffering from chronic, degenerative, progressive diseases are much more attuned to these possibilities than are the unafflicted. The vitriolic opposition to Dr. Kevorkian’s beliefs often came from those in politics who, on the opposite end of the continuum advocate vociferously for “The Right to Life”. Many of those zealots claimed to have the “responsibility” to “speak for the unborn fetus” while hypocritically dismissing the adult who sought to end their suffering with the assistance, compassion and professionalism of a physician such as Dr. Kevorkian.

As is all too often the case in America, what began as a matter of medical ethics it soon morphed into a legal, political, social issue with all the accompanying politicos, pundits, activists and talking heads of every stripe. However, in some State’s the issue managed through grass roots organizers to find its way onto ballots in the form of “initiatives” in several Statewide elections. The polls results were mixed but a certain measure of insight was gleaned from the places where the ballot initiatives failed as well as where they passed. The American public, the voting public, was becoming engaged in the debate and did not see it in the stark “black and white” terms our politicians so cherish. This was an issue that any American could identify with in some way or another.

The issue made for some strange political and social bedfellows. Right to Die groups sprang up around the Country and were often joined by staunch Libertarians, privacy and limited government groups; not the usual suspects one would find similarly aligned in such a volatile matter of morals and ethics, of religion and science, pro-life and pro-choice, personal liberty and government intrusion, of life and death itself.

The reader so inclined to learn more about this infamous yet enigmatic man might find some of the links below this article as informative, enlightening and interesting as anything they may have read or learned about Kevorkian before. He was a gifted child, by some accounts a “genius” and possessed by an always curious, restless mind. He was a “Maverick" at a time in medicine when such mavericks were dismissed as fools or worse. He was a “Renaissance Man” , a very talented painter, musician and writer and a deep, creative, innovative, brave thinker.

His memory will fade with time but he does leave a powerful legacy. Not many people can have such a claim stated about them posthumously. Dr. Jack Kevorkian singlehandedly brought the issue of Death with Dignity out of the stifled shadows of the chronically, fatally ill into the harsh light of day and was more than willing to do so, not for fame or fortune, but for principal and a cause.

Copyright TBC 2011 © All Rights Reserved
Posted by Brooding Cynyc at 1:58 PM No comments: