OUR WARS FOUGHT BY LESS THAN 1% OF OUR POPULATION,

(Tuesday August 12, 2014 NYC)  Given the tumultuous state of affairs around the world, the eruptions of ancient tribal and religious blood feuds, the brutal atrocities of ethnic cleansing from the Kurdish region of a broken Iraq and wide swathes of Africa and Russian aggression in Ukraine as they seek to reinvent themselves as a “super power”, it is difficult to justify the blanket media coverage of the untimely demise of an actor.  Yes, Robin Williams was an actor of extraordinary talents and gifts.  His illustrious career spanned decades from his earliest days on TV to cinematic achievements that brought him acclaim and fortune.  As an entertainer and cultural figure whose roles brought cinematic happiness to the masses his untimely death by suicide has evoked a torrent of media attention as well as heartfelt testimonies from his colleagues and peers.  The body of work he leaves behind exemplifies the range and depth of the characters he brought to life on the stages large and small.  Clearly the fact that this man who appeared to have it all; fame, fortune and Hollywood’s respect found himself trapped in a spiral of darkness and despair of such hypnotic power that lead him to take his own life adds to the larger picture while calling attention to the very real neuropathology of depression, despair and suicide.  Some can empathize, others might be able to relate to that condition more than others, but suicide still retains its fundamental secrets that often allow a tortured soul to be devoid of external symptoms.  Yes, clinical depression and suicide are inexorably linked in some circumstances but one need not draw a person into the other.  No matter what precisely brought Mr. Williams to that moment of irreversible decision will likely never be known, his life can be celebrated and eulogized by those he left behind and by the millions of fans who came to know him via his comedic and dramatic characters.  But, in another more anonymous segment of the population suicide is a frequent occurrence.

On any given day of the year 22 military veterans take their own lives.  Suicide among our veteran population is at epidemic proportions yet little, if any; attention is paid to this tragic reality.  The young men and women our country has asked so much of over the last 13 years often return home after multiple deployments with shattered nerves and a host of mental illness including Post Traumatic Stress Disorder (PTSD).  Our military incursions into Afghanistan and Iraq have created a generation of battle tested warriors who frequently find themselves lost once they hang up their uniforms and attempt to reenter society.  For far too many this challenge dwarfs the hardships of the numerous firefights, the multiple deployments, the surreal sense of “differentness” they encounter once they return home for good.

Since 1973 our military has been composed entirely of volunteers.  President Nixon eliminated the Selective Service Draft completely by the time our troops were leaving the South Vietnamese to their own devices after 11 or so years of United States military engagement on their behalf.  When military service was required virtually every family had a member who had been or was in the active duty military.  That shared, common experience was a bond that provided all American families and, most obviously, the military veterans themselves with a sense of familiarity.  Now our military services represent less than 1percent of the entire population.  The sense of shared experiences and sacrifices has largely evaporated along with conscription.

What merits our attention, outrage, and ultimately our action, says a great deal about the culture, the society we live in. We as a country ask great efforts and sacrifices from those few among us who answer the call of their own to voluntarily serve their country in uniform. Gone are the days of shared sacrifice. Long ago is the time when going into the “service” was a rite of passage for men in times of peace and times of struggle. When our elected leaders had that common service experience among them, they were much less willing to ask other young men (and women) to go and serve in armed combat, to put lives “in harm’s way”. When our leaders were familiar with the brutality and horrors of war, the nuts and bolts of close combat and all that it entails, they recognized exactly what it meant to send troops to defend our national interest, our “National Security”.   Now the burden is borne by a mere fraction of the population and the hell of war for the rest of us is reduced to short film clips on the news. We can little imagine or appreciate what stresses our troops incur having to live hyper vigilantly in horrid environments with the very real specter of their own deaths as well as the taking of others’ lives is a major constant component of their reality.

Wracked by profound cases of Post-Traumatic Stress Disorder (PTSD), thousands of young war veterans continue to live the horrors of their battlefield experiences, many spiraling down into the darkness of severe depression, many self-medicating with excessive alcohol and drug intake, while others among them, many others, having sought relief from their suffering by killing themselves. Yet, what merits the national attention, which tragic circumstance is embraced as the latest cause celebre’ by famous actors and artists, and what has come to define the suicide debate among us?  Clearly, it is not the ongoing crisis in the ranks of our military service personnel, both veterans as well as active duty. After almost 13 years of continuous war on two disparate fronts, years of multiple deployments, inadequate mental health care resources, and increasingly greater demands placed on their young shoulders, the men and women of our military have become largely forgotten by the media and their fellow Americans. That is tragic for everyone on both sides of the equation.

A person of Mr. Williams’s wealth has access to the best medical and psychiatric care if they choose to seek health for their problems.  Veterans have no such luxury.  The Veterans Administration system has completely collapsed under the weight of the waves of returning veterans who require medical attention, rehabilitation after horrendous battlefield injuries and mental health services in both the long and short term.  We have witnessed the abject hose who serve ineptitude in the VA ‘s inability to carry out its mission; the special code that exists between our veterans and our government that says all those who have served will be taken care of.  The VA has been exposed as just another stumbling, bumbling federal bureaucracy incapable of functioning efficiently and effectively.  The useless Congressional “oversight” committees tasked with assuring the VA receives proper funding through the appropriations process and is delivering on the code between our vets and our government is being honored, might as well not exist for all the good they do.  They continue to cut funding that forces the VA to reduce services at a time of such tremendous need.  Perhaps if we actually had a fair number of veterans in Congress more attention would be paid to these issues but even that is unlikely given the obvious inability for Congress to carry out even the most basic of their tasks.

There are some experts in the field of psychiatry, psychology and the neurosciences who believe that every suicide is preventable.  Sometimes all it takes for a person to snap out of the dark magnetic pull of preparing to kill themselves is a loud noise, a phone ringing or a knock on the door.  That particular spell can be broken but most people who do commit suicide have made previous attempts and despite all methods of interventions and treatments, those most determined to end their lives by their own hands in that uniquely solitary and isolated manner will ultimately succeed.

Years of studies and statistics offer scant details beyond the basics such as demographics and precipitating events as they attempt to better understand the underlying pathologies and signs of a suicidal person.  But, most people who do kill themselves can conceal their pain and intentions very effectively because they are determined and dedicated to their decision.  There are some people who think it through, perhaps even plot and plan it down to the minutest detail imbued in the knowledge that the day will come when they will take their exit from this temporal existence.  While many claim that suicide is the ultimate selfish, cowardly act; a permanent solution to temporary problems, they simply do not understand the suicidal mind.  For some, yes, it is an impulsive act carried out hastily with little or no real thought but they are in the minority.

Suicide since the days of antiquity was a taboo, an unnatural usurpation of God’s (who ever that God may or may not be) that would surely banish the suicide to an eternal existence of abject misery and unfathomable punishment. It was not very long ago that Roman Catholicism doctrine forbade a suicide to have a memorial funeral Mass and to be buried in a Catholic cemetery.  Other Christian and non-Christian religions and ethnic tribes have also viewed the commission of suicide as a selfish act that directly insults and upsets the “natural order” of life on Earth.  While it is likely that our most distant genetic forbearers did not have high rates of suicide, the practice in the developed world increases annually.   The United States ranks in the top five nations in per capita incidences of suicides.

Every day in America an average of 110 people will commit suicide 22 of whom are veterans.Think about that for a minute.  Over 25% of the people who commit suicide on a daily basis are military veterans.  Suicide is represented across all demographic borders but the alarming rate of suicide among our young military veterans is a profound and piercing cry for help.  This particular community of young men and women who have sacrificed and seen so much, who have experienced the horrors of combat in all its bloody, gory, harsh reality are being failed by their government in a truly criminal sense. 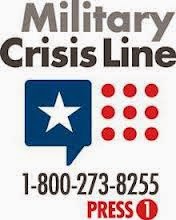