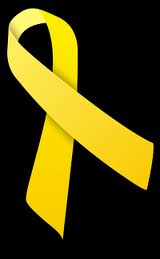 (Thursday January 17, 2013)  Let’s have at least a temporary moratorium on Ribbons: Cause Ribbons, Advocacy Ribbons, Awareness Ribbons, Support Ribbons.  Whatever they are called let’s not have any new ones added to the dizzying plethora of these annoying ubiquitous little ornaments.  It has gotten completely out of hand.  The entire Crayola crayon collection of 64 colors has already been exhausted and now there are some colors that are associated with more than one single cause or issue.  It has reached the point where the normal spectrum of colors is insufficient to the incessant demand so, some Ribbons are in patterns – camouflage, spotted, plaid, rainbows, argyle and a host of other hideous designs to make one despise not only the imbecile wearing the Ribbon on their lapel, collar or hat, but prompt you to immediately develop a “fuck them” attitude to whatever group is represented by that particular ribbon.  Enough is enough.

Americans are a quirky, idiosyncratic, often simple-minded people, as diverse and disparate as a population not engaged in armed conflict with each other can be.  Our culture, or what passes for it today, is prone to fads of all kinds and sorts.  The preponderance of ribbons has moved way beyond a simple fleeting fad into a trend and now, apparently, into a full-fledged embarrassing fetish.  You know that your cause, illness, gripe or issue has officially arrived when it gets a fuckin’ ribbon.  This entire Ribbon shtick may have started out innocently and sincerely but it is now a shallow practice meant to signify the wearer’s allegiance with a group or cause without really doing anything of substance or meaning for that group or cause.

There is no arguing that many of these causes and groups are important; there is no denying that many of these illnesses, ailments, conditions, syndromes, rashes, and diseases; congenital and acquired, need to have a greater level of the non-afflicted public’s attention.  No.  Some of these advocacy/support ribbons have shed light on afflictions and impairments the victims of which have had to suffer in silence often feeling alone in their struggles.  Perhaps all Americans needed to be more cognizant of the fact that too many of our fellow American’s, our friends, neighbors, co-workers, distant cousins, and bowling team members are engaged in a daily, ruthless battle with horrid maladies and miseries such as Irritable Bowel Syndrome, Vaginal Itch, Fungating Prickly Heat, Megacolon, Chronically Abscessed Warts, Hairy Nevi, Flatulence Profundus, Morbid Halitosis, and Degenerative Gastritis, just to name a few.

Some of the people who teach our children, cut our hair or lawns, bag our groceries, deliver our Chinese Food and Pizzas, wait on our tables, fix our computers, install out cable service, drive cabs, trucks and buses may be plagued and stricken with any number of manias, phobias, fits, fugues, seizures, tics, spasms, aphasias, delusions, spells, cramps, or any of the countless aches, attacks, blights, bugs, cankers, contagions, convulsions or debility, decrepitude, defect, disorder, distemper, endemic, epidemic, or feebleness known to modern medical science.  Maybe we all need to be more aware of the various strains of fever, hemorrhage, indisposition, infection, inflammation, unsoundness (of mind or body), and virus that still retain age-old stigmas and force those among us so affected by and smitten with such curses to live forlorn and lonely in the shadows with their adversity, anguish, crux, distress, hardship, misfortune, ordeal, pain, plight, scourge, torment, trial, tribulation, trouble and woe.  Even if we need to be aware of all this shit, it is dubious, if not doubtful that the wearing of some hideously colored strip of ribbon fashioned into a loop will do much to raise our awareness, conscientiousness, and concern.  Frankly, some of us would probably rather not know that the kid handing us a Happy Meal at the local McDonald’s hasn’t had a bowel movement since birth or the woman sitting on the bus next to us has had plantar warts and weeping sores on her feet.  Perhaps having such intimate knowledge of our fellows easily accessible just by looking at the ribbon on their coat might cause us to react negatively, maybe even violently towards them and their gall at such blatant, cheap, callow, crass and insulting advertisement for sympathy or support.  People should keep their abnormalities to themselves, not wear them on their hats.