A MODEST MEMORIAL TO ONE OF OUR FINEST 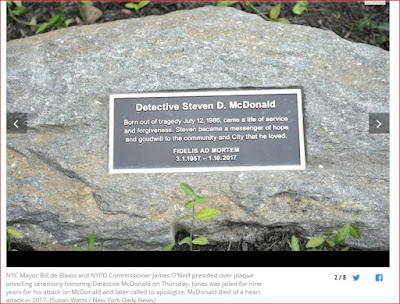 (Thursday July 12, 2018 Central Park, NYC) For anyone On The Job 32 years ago, this day is forever seared in our memories.  Certain events hold greater significance in our  individual and institutional memories than others for no reason beyond the shock value, the sheer murderous reckless audacity that defines it. The commemoration of one such heinous crime is marked on this day.

THE COP, THE PATIENT

The trauma surgeons working in Bellevue Hospital 32 years ago on this day were all well-seasoned, intimately familiar with the human wreckage and carnage hustled into their Emergency Room on a ceaseless basis.  They were experienced in their particular art and science of working aggressively on severely injured, wounded bodies in their efforts to stave off death. Their bloodied patients came from motor vehicle accidents, construction site injuries, all and any manor of chance in our City including violence; these surgeons knew how to handle stab and gunshot wounds as well, and likely better than, any other trauma teams in the country.  They worked with a tunnel-visioned focus fully engaged in the wrecked body that laid before them be that body Black or White, Cop or criminal.  Thirty-two years ago today they received a mortally wounded 29-year-old NYPD Officer who’d been shot at “point blank” range three times by a 15 year old robbery suspect in Central Park.

Officer McDonald had immediately been transported to Metropolitan Hospital and quickly the doctors there realized if McDonald was to have a chance at survival he needed to be downtown in Bellevue, at the time the premier trauma center in the City. He sustained grave injuries from the three bullets that struck him; the first bullet hit him in the head, above his eye; the second hit his throat and caused him to have a speaking disability; and the third shattered his spine, paralyzing him from the neck down and leaving him quadriplegic and in need of a ventilator. Yes, the Bellevue team saved the life of the third generation NYPD Officer and throughout the years since until his death in 2017 he dedicated his energies as a living example of forgiveness and grace, of inherent spiritual strength, and as a staunch advocate for these very same characteristics.  Despite all he’d endured and what he physically lived with on a daily basis, Steven McDonald remained optimistic and persistent.

It was a relatively not unpleasant day for a NYC July, it was just another Saturday for everyone.  Working on an “Anti-Crime Unit” detail, PO McDonald and his partner, Sgt. Peter King, approached three young Black teens because they fit the basic descriptions of suspects in a rash of Central Park muggings, robberies, and bike thefts.  In plain cloths with his NYPD shield pinned to his belt and a department radio in his hand he asked one of the three, Shavod “Buddha” Jones, to allow him to see what was in the sock Jones was holding in his left hand.  In a nanosecond Jones pulled a gun from the sock and shot McDonald three times.  Before the gunshot echoes had faded McDonald was in a fight for his life and within an hour the three young assailants were in custody.  McDonald’s life hung in the balance as did the fate of Jones and his accomplices.  Jones, as the shooter, had the most to lose.  Though a 15-year-old juvenile he would be charged with Capital Murder of a Police Officer.  As his fate would play out he was sentenced to 10 years for attempted murder serving just a little over eight and a half years before being paroled in 1995.  Within four days of his release he was killed in a motorcycle accident in The Bronx. Yes, to this day MOS working and retired still view his death as divine retribution, as cosmic justice, Karma.  Yet McDonald never saw it that way and it is here, embedded in the Soul within his paralyzed body that his truest Courage and Grace is most evident.  McDonald forgave Jones and had even corresponded with him and his family for a brief time.

It is likely that each of us at some time or another, a random idle moment, a dark interlude on a subway that has for some reason stopped between stations, had reflective thoughts about not only the nature of our Jobs, but the primal very tangible realities of the life and death consequences that accompany each of us to work every day.  Perhaps in these idle moments we’ve allowed our thoughts to run to the freely speculative, to engage in the deeply personal exercise of what we are capable of and not capable of.  Steven McDonald’s life has been the impetus for shifting more than a handful of minds into that introspective mode.  Could I forgive the villain that confined me to a wheelchair for life?  Would I be able to carry on in the face of immeasurable adversity?  Could my relationship, if any pre-existed, with God remain intact after being dealt such a monumental assault of mind and Spirit, of Body and Soul?  We likely don’t share these wanderings with others and, if we do, we often will distance our inner truths to the more generic, removed hypotheticals so as not to reveal something about ourselves.

Steven McDonald became a global advocate for forgiveness and reconciliation.  From appearances at a roll call in Brooklyn North to Norther Ireland he traveled spreading his message.  From South Africa to the South Bronx he met with local, national and international figures, prominent leaders from the Pope John Paul II to Nelson Mandela as well as Catholic Bishops and Cardinals and clerics of all orientation the world over.  He became a truly global advocate for forgiveness and peace.

PLAQUE ON A ROCK

It was a bit warmer at this small grass covered ridge in Central Park than it was 32 years ago today but, aside from the weather not much in the Park has changed.  What has changed has been City-wide, a decades long concerted effort to recapture Our City from the depths of crime and violence, of such a poor quality of life that life long residents and businesses fled for greener suburban pastures for years.  Our City in July 2018 opposed to 1986 in many fundamental ways is so vastly different that the younger generations of NYPD MOS hardly believe the tales they are told.

The gathering here was small, mostly family, friends, colleagues, and of course the useless politicos who just could not resist the photo op.  The churning of the City could be heard; some birds chirped in nearby trees, pigeons strutted around, and the omnipresent wail of sirens drifted through the warm air.  It was a bit eerie standing at this site on this day filled with the significance of this small plot of ground in our sprawling City.  As Cardinal Dolan was finishing his Invocation two squirrels could be seen just beyond the grass line above the stone bearing the plaque. They both sat momentarily motionless perhaps somewhat disoriented by a group of people who did not move; the cadence of our prayers may have soothed them.

The ceremony was brief, it felt more a formality than sacred devotion.  It may be the final piece of our City to be dedicated to one of our own who led a life of goodness and peaceful resolve after being wounded so grievously by a young person he forgave.  Steven taught all many lessons.  He converted some of the most cynical and jaded among us to at least believe that Faith was possible, that so much of our lives is a matter of choice not circumstance.  We will forever honor his legacy and remember his courage and message of forgiveness.

Rest in peace, Steven.  We are all confident that you are resting easy in the Light and Warmth of the Lord.

Posted by Brooding Cynyc at 3:30 PM No comments: