THE ECONOMICS OF “CHEAP LABOR” 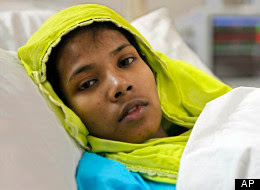 Survivor of a building collapse Reshma Begum receives treatment at a hospital in Savar, near Dhaka, Bangladesh, Saturday, May 11, 2013. The seamstress who survived 17 days before being rescued from a collapsed garment factory building was exhausted, panicked and dehydrated as she recovered in a Bangladeshi hospital Saturday, but she was generally in good shape, according to her doctors. (AP Photo/A.M. Ahad)

(Friday May 17, 52nd & Lexington Ave., Manhattan, NYC) There is likely not an American reading these words today who does not have some piece of clothing, some garment or other that was manufactured in Bangladesh.  Second only to China in providing ‘ready-made goods’ to western and particularly the American market, one fifths’ of this profoundly impoverished country’s economy is generated by the manufacture and export of clothing destined for  export.  From coast to coast discount retailers such as Walmart to high end labels that adorn the racks in stores such as Bergdorf Goodman and Neiman Marcus not far from here in Midtown Manhattan, to brands including Gap, Benetton and Calvin Klein, have been produced by cheap labor in abhorrent working conditions half a world distant from here.

For better or worse America today is a huge importer of a mind-bogglingly wide array of goods from foods and clothing, to automobiles and electronics.  There was a time the might of America’s manufacturing base had the United States firmly in the driver’s seat of the rapidly growing global economy.  As the business climate changed and circumstances such as increased regulations, labor costs, and the general expenses of doing business here became onerous to many CEO’s and captains of industry, more and more companies began to take their operations overseas.  After all, in our homegrown brand of Capitalism, the bottom line, stock dividends, and huge corporate profits became the Holy Grail.  They were the benchmarks that analysts, investors, bankers and Wall Street managers pored over in search of more clever ways of increasing those benchmarks.  It was and remains a largely self-propelling feedback loop that began to erode American industry and manufacturing.  After all, why pay for the costs of labor, regulations, employee benefits and the rest if a vast sea of cheap labor in under or unregulated countries sat idle yet eager to work for a wage that would appall American’s?

The actual causation of the decline and ultimate diminishment of American manufacturing is difficult to identify and subject to contentious, often bitterly partisan argument.  Complex forces in isolated instances began what would soon be a mass evacuation.  As our businesses moved their operations off shore the once solid dominos of our industrial economy began to fall.  And once they began falling, they never stopped.  In little more than two decades went from being one of the world’s largest exporters to one of the largest importers.  Most disturbing was that in specific industrial and manufacturing endeavors that once were a huge source of exports for America such as steel, electronics, digital media and even grain such as soy and corn, we found ourselves in a position of having to now import those very same goods.  One could argue the arcane details of free trade agreements, tariffs and taxes, and would likely have no broader or better understanding of the etiology of our industrial decline than does the average worker who lost her job to “down-sizing” or an employee whose employer who saw “outsourcing” as a cost cutting, revenue generating gravy train.

For the most part the American consumer seems to give little thought to the points of origin for the products that line the shelves and fill the racks of merchants from grocers to the big box discount outlets.  From sportswear to footwear, from accessories to the basics, the overwhelming majority of the consumer goods available to us originate in some of the poorest countries on the face of the Earth.  It is only when catastrophe strikes such as it did last month in Bangladesh that some attention is focused on the disparities inherent in the global supply chain in which we consume far more per capita than we produce.

Besha  Regum and the hundreds of her coworkers who were in the factory that collapsed last month claiming over 1,100 lives worked for a wage that is equal to the price an American pays for one Izod or Calvin Klein shirt.  Yes, everything is relative however the inequities in the sprawling global supply chain are so stark that the arguments that support having our goods manufactured overseas ring hollow in reality.  The harsh fact of the matter is that the American consumer exists at a distance so far removed economically from those who produce the goods we purchase that it is difficult to rationalize the disparity away.  The common justification touted by those with vested interests is that the wages paid to these laborers in “third world countries” or, perhaps even more insulting, “developing nations”, is far greater than the median income of their peers.  Using the bleak economic data such as per capita income of countries like Bangladesh does not excuse or explain away what is in reality systemic exploitation.

This interconnected sinuously intertwined global economy is a double edged sword that knows no mercy. For those at the top it cuts a prime sirloin of ever increasing wealth while for those at the bottom it slices out a hardscrabble sustenance living.  Prominent among the fallacies that the proponents of outsourcing vociferously assert is the specious and failed economic theory that defined the Reagan Era in American politics.   To believe that “A rising (economic) tide lifts all boats” is akin to asserting that shipping American jobs overseas is good for our domestic economy.  Both are patently false claims.

FINDING BALANCE IN AN UNBALANCED WORLD

As is the case in so many of the thornier issues facing our government and others nations as well is that the “Law of Unintended Consequences” is a potent current undermining the piecemeal efforts to allow developing nations to gain entry in the exclusive club they so desperately seek to join – the “developed” nations sometimes simply referred to as “The West.”  America was permitted to grow unfettered by rules and regulations that have since become the dominant forces that impacted our manufacturing/industrial base.  Our “Industrial Revolution” predated virtually all labor laws and workplace safety regulation that are so prominent and often roundly derided by CEO’s. Human rights groups, environmental activists, and a host of other advocates endeavor to export our particular brand of regulation and protections into countries that produce American products.  As noble an effort as this may be it is not only unrealistic, it seeks to impose a level of structure and rigor to overseas workplaces that is simply not feasible. 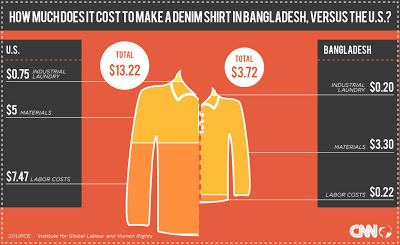 The highly regulated American workplace comes with a price to consumers.


Are American’s willing to pay more for goods that come from overseas?

THE GRINDING ECONOMICS OF POVERTY

People the world over possess common aspirations.  Those aspirations have a far better chance of being realized depending, sadly, on one’s birthplace.  Parents love their children and want nothing more than to protect and nurture them and hopefully provide whatever they can so their children have a better life than their own.  America has been a work-in-progress, a grand experiment in republican Democracy, Laissez faire economics, open markets, individual freedoms, and our brilliant and inspired Constitutional rule of law.  But we are a young country; infants in the world community who was blessed to be born on a largely pristine part of the North American continent that afforded us the opportunity for unrestrained growth.  Our two oceanic borders have kept us physically isolated from much of the turmoil that has engulfed various parts of the world since our inception.  Our polyglot nation of immigrants had the privilege to develop, expand, and thrive; a unique trifecta of circumstances unrivaled since the empires of the colonial days.  For the United States to ask other countries to “put the brakes” on their own burgeoning economic engines is unreasonable and, to a degree hubristic.

All that can be done is to exert our influence in the multinational forums that exist for the exchange of ideas, the United Nations, and to engage with our trading partners in their efforts to find the balance between industrialization and individual liberties while combatting endemic corruption and antiquated ideas.  To be responsible members of the Global Community America has certain obligations that are obviously, easier said than done.  However, we must export more than our jobs and cultural media and cannot continue to import goods that are produced in ways that are unacceptable on our shores.  This is the challenge before governments today and it is, let’s be explicitly clear, no easy task.  It is a task fraught with Gordian Knots of issues ranging from taxes and tariffs, to worker safety and health.

Despite the seeming insurmountability of this challenge it must be taken up and taken up in earnest.  There is a wider world that we Americans seem blissfully unaware of until some catastrophe or disaster strikes half a world away and makes our headlines.  But, in spite of our own blissful ignorance and parochialism, most Americans admit that labor conditions and workers’ rights of those in far off places such as Bangladesh have “the right” to most of the same protections and oversight that serve to protect them here in their own jobs.  Actually, in a Gallop Poll taken last Summer a good majority of Americans, 63% said they would be willing to pay a bit more for their clothing that is manufactured overseas in often deplorable conditions with child labor.  That is a start. And, the key towards identifying and implementing solutions takes nothing more than the desire to enact change.