A CORRECTION, AND THEN SOME 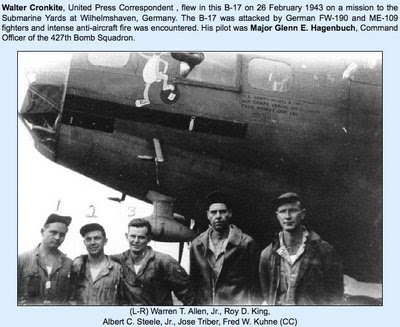 (July 18, New York, NY) We must begin this post to correct an error and apologize for our carelessness.

In a posting by broodingcynyc last night, he erroneously stated that Walter Cronkite had flown in a “B-29” during a bombing raid over Germany while serving as a war correspondent for UPI. One of our astute readers, identified only as “anonymous”, sent us a comment pointing out that factual error. Cronkite flew in a B-17 bomber, not, as “anonymous” pointed out, a B-29.

We appreciate having had broodingcynyc’s error brought to his and our attention and, again, we apologize.

As our “anonymous” commentator noted, “Cronkite was a stickler for detail” and that makes our error even more troubling. In all our postings tagged as current events or news or similarly, we all do try to get the facts correct. We will all do better in the future to avoid such a sloppy mistake as was perpetrated in last night’s post.

Copyright TBC 2009 © All Rights Reserved
Posted by Brooding Cynyc at 2:27 PM No comments:

THE LAST REAL (TELEVISION) JOURNALIST
OR ANY KIND OF JOURNALIST, FOR THAT MATTER 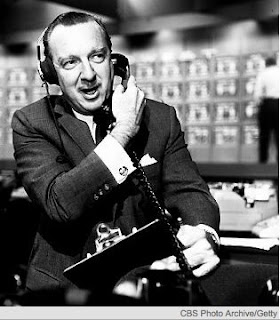 Cronkite was the calm voice of triumphant and turbulent events for decades.


(July 17, New York, New York) The voice who addressed the nation each evening during the CBS Nightly News for almost 20 years died here earlier tonight after a battle with a degenerative cerebral vascular degenerative disease. Walter Cronkite was 92.

Once named during the 1970’s as “The Most Trusted Man in America”, Cronkite was a pioneer of what was at the time a new medium, television, which would go on to be the public’s primary source of news in the decades that followed. Every major historic event of the latter segment of the 20th century was chronicled for all of us by Walter Cronkite.

The cub reporter turned World War II correspondent landed with the troops at Normandy on D-Day, flew with a B-29 crew on a bombing run over Germany and went on to define television journalism. There is not a television journalist alive today who could even wash the socks of such a truly honorable American icon.

Journalism was his passion and he reported with a sense of fairness, truthfulness and personal integrity the likes of which will never be seen again. His was the calm, reassuring voice we heard when President Kennedy was pronounced dead in Dallas. His reporting from Viet Nam hastened Lyndon Johnson’s exit from the reelection campaign. When men first stepped foot on the Moon, it was Cronkite, with few words and a boyish enthusiasm, whose relieved smile gave us all permission to stop holding our breaths and celebrate the achievement of the century.

No journalist, particularly any tele-journalist has ever or will ever come close to the code of ethics and character that guided Cronkite’s professional life and, according to his closest friends, his personal life as well.

Entire generations of Americans grew up with the soothing yet authoritative voice of Mr. Cronkite reporting the days events as they ate supper. He had no equal. he never will.

Thank you Mr. Cronkite for being a man of great power and influence who never abused or misused it. Thank you for being a reporter, an honest broker, who spoke to world leaders as an equal but also with dignified respect and humility, who wore his lofty position with class; who wore it well. Thank you for your honest objectivity, your discretion and, particularly in your comment upon returning from Viet Nam after the TET Offensive, your unfailing candor.

Compared to the ilk of journalist working today, Walter Cronkite was GOD.

May he rest in peace.

And that’s the way it was.


Copyright TBC 2009 © All Rights Reserved
Posted by Brooding Cynyc at 9:01 PM No comments:

Apollo 11 lifts off into history

(July 16, Cape Kennedy, FL) Looking back it all seems so primitive, so “iffy”, so impossible. Armed with little more computing power than we have today in our microwave ovens, a massive Saturn 5 rocket, loaded with tons of liquid hydrogen and oxygen sent three incredibly brave men on a journey to another world. This lift off, 40 years ago today, would place two human beings on the Moon while a third orbited overhead awaiting their return.

The history of the Apollo Program is well documented as her precursor Programs Gemini and Mercury. The thousands upon thousands of Americans; engineers, technicians, scientists of every stripe as well as that rare breed of man chosen to be an “Astronaut” are all truly part of a great American achievement and legend. From scratch, within a nine year period of time as ordained by a young President, JFK in 1960, we went from the Earth to the Moon.

Arguably, no human achievement has yet to match it not only for its scale and scope but for its nerve, its collective “can-do” spirit, courage, novel, creative thinking and technical acumen that was developed daily, “on-the-fly” with no points of reference to stand as guideposts.

One Program built on the next with each increasing in hazard, risk and ultimate reward. Project Mercury mastered Earth orbit, while Gemini invented the skills, technology and capabilities that were the pivotal bridge to the Apollo Program which was tasked with “putting a man on the Moon and returning him safely to the Earth.” JFK would not live to see his bold, brazen, incredibly ballsy vision realized. But, billions the world over would.

The awe and wonder that was ignited with that Saturn 5 rocket that night 40 years ago, still reverberates in the hearts and minds of those of us old enough to appreciate what it meant.

For the next four days we will remember; we remember out of honor, awe and because it is something that is simply unforgettable.

The Brooding Cynyx request all our readership to take a little time and read up on those days, the early years of NASA when they were virtually perfect and all the other amazing, compelling and fascinating aspects of the days of “The Space Race.”

It will be time well spent.

Just a few of the thousands of links available: All well worth a look:


Copyright TBC 2009 © All Rights Reserved
Posted by Brooding Cynyc at 1:22 PM No comments:

IRONY FOR THE AGES

Biased Alabama Senator now sits as ranking minority member
of the same committee that would not approve his nomination to the
Federal Bench in 1986.


(July 13, Washington, DC) Drama is never too far beneath any surface here in the nation’s Capitol. Drama that ranges from the inside the Beltway only charades to serious matters that often impact untold lives for years, if not decades to come. Being a city populated purely by self serving politicians, thiese gramdstanding intellectual ants are completely disinterested with their elected purpose - that being to legislate and govern - eferything is always the political (including any kind of sex scandal that trumps every issue no matter how significant, weighty or important.)

Today was the absolute epitome of Senatorial theatrics. Instead of giving an obscure speech in the middle of the night on C-SPAN purely for the consumption of their constituents back home, today the 20 members of the Senate Judiciary Committee were on center stage. They each had ten full minutes to demonstrate exactly how buffoonish, if not down right ignorant they are, but to preen and posture for audiences as parochial as their home states and and large as the rest of the country. What a garish display. The only element of truth revealed was that each Senator had his or her staff prepare their remarks for months - these staffers should all be fiction writers; they are all masters of hyperbole and the absurd. A few “fact finders” among all the staff writers may have been helpful and actually could have spared the most imbecilic of the Senators the embarrassment of illustrating for the country their abject stupidity, prejudice, lack of character and how little they understand, or care, about the specific duties and Constitutional responsibilities of their sworn Offices.

It would be a highly appropriate question to ask Senator Sessions if he has any sense of deja vu’ as he sits in the Committee chamber that denied his appointment to a federal judgeship based on “racist” issue in 1986. To think this scum bag who represents all the sordid , awful, and racially shameful history of the State he represents, is an irony almost beyond the bounds of acceptable irony: it seems ludicrous. Just because Arlen Specter, the traitorous former Republican Senator from Pennsylvania jumped ship, Sessions ascended to his current position as ranking minority member of the Committee. Just another component of Traitor Arlen’s dubious, if not infamous, legacy.

In a Senate Committee that boasts some of the most ignorant, fundamentalist, Neanderthals, Sessions is a standout among his peers; not by much, but a stand out non the less. His racists beliefs are well known and documented, his disdain for Blacks and ethnic minorities generally, have him firmly planted in the dark yet oddly powerful far right wing corner of his Party. His questioning of Judge Sonia Sotomayor will most definitely reflect the sentiments in his incoherent, factually inaccurate, rambling screed that passed for his opening statement.

This is high political theater, indeed and, as of today, it is plain to see that Jeff Sessions will excel in his role as the Court Jester.


Copyright TBC 2009 © All Rights Reserved
Posted by Brooding Cynyc at 1:42 PM No comments: