FOGGY OVERCAST ABOVE
CLARITY OF RAW EMOTION BELOW 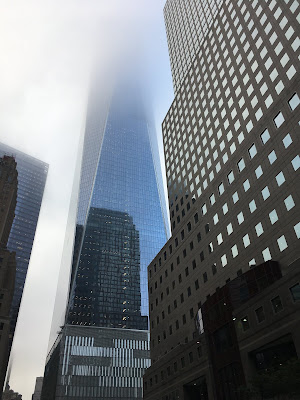 (Tuesday September 11, 2018 The Battery, NYC) It is nearly midnight and the highly conspicuous NYPD presence in this area earlier today has returned to normal levels.  The crowds who traveled for the 17th anniversary of the 9/11/2001 terrorist attacks just blocks away this morning to honor and memorialize their dead have returned to their homes perhaps a bit more comforted by the day’s rituals – maybe not. This sector of Manhattan has resumed its normal routine.  The yachts moored in the marina bob in the slight chop; the waft of music and laughter are carried on the slight breeze from the nearby PJ O’Rourke’s and somewhere in the distance a discordant choir of sirens wail.  But this is the very edge of Our Big Island and as such not on the “beaten path”; yet it is this neighborhood that will forever house the Sacred Ground upon which once Our noble Twin Towers stood as bold exclamation points for all the world to see.

This morning broke with a low overcast and a high fogbank that obscured the top of the Freedom Tower.  Her spire pierced the fog as the happenings 1,776 feet below on the street pierced the hearts of all who gathered for what have become annual rites; rituals such a day merit.

Born out of the NYC optimism of the late 1960’s, the design, engineering, and construction of the World Trade Center was as audacious as it was visionary.  Their story has been told many times in many forms but no one critic or naysayer could ever deny their raw beauty.  Their deaths came as the result of a diabolical evil, of an ultra-strident orthodoxy - a brand of radical Islam that was unimaginable up to September 10, 2001. New Yorkers and all Americans lost their innocence on the bright Tuesday morning 17 years ago; we learned our vast ocean spans no longer protected our homeland from virulent terrorism.  In retrospect it is painful to see just how naïve, how vulnerable we all were.  Our sprawling federal government’s intelligence apparatus failed us, failed us in a most negligent way.

NAMES AND TOLLS OF THE BELL

It takes four hours to read the names of those murdered at the WTC.  The names are read by victim’s family members in a commemoration punctuated by moments of silence and the toll of a bell.  These moments represent the exact moments that each of the Twin Towers were struck by the hijacked planes and the moments each tower fell in a roiling cloud of hell. There are also moments of silence at the exact times hijacked jets hit the Pentagon and one that crashed into a field in Shanksville, Pennsylvania.  Before the recitation of the names of the deceased commenced, the high fog descended and hung over the Hallowed Ground and the aggrieved like a funeral shroud. Many of the families attending the service this morning carried enlarged photographs of the one they lost.  While those faces are frozen in time the surviving family members show the signs of time’s passage; in some faces the years of grief and pain are evident.  For all survivors that anguish will never evaporate; it is a heavy burden they will bear forever.

Among those present it is perhaps saddest to see those who were infants or young children on September 11, 2001.  Now grown into their teen years and older they mourn a mom or dad they have scant, if any real recollections of.  Some of them bear striking resemblance to the person whose photo they carry.  Several of the women who perished that day were pregnant and their unborn children are also recognized.  Yet from the abomination of that day Lower Manhattan especially the World Trade Center site has risen from the ashes.

The twin pools of the Reflecting Absence  memorial in what were the foundations of the majestic towers, there are carved out what the architect calls “voids”—a pair of black granite craters, each 192 x 192 feet square and set 30 feet down into the footprints of the Twin Towers ⃰. Each crater boundary walls are etched with the names of all those who died in the attacks. The voids are the focal points of what is known as the Memorial Glade. The Glade is as much sacred ground as is any American battlefield. The entirety of the 8.6 acres represent raw emotions while being a staid yet elegant memorial, understated, respectful and fitting with the mood this landmark warrants.

The ceremonies and rituals practiced on this day are as much memorializing the deceased as it is about keeping our memories alive.  There is an entire generation growing up in the post 9/11 era.  For many the events of that day may be cursorily taught in school along with other events in recent American history.  It falls to members of our Community, those who experienced that day and the aftermath personally to tell the tales.  It will be only by our firsthand accounts that the significance of September 11, 2001 will remain relevant and recognized for the profundity that resonates here in Our City, the entire NYC Metropolitan Area and the United States at large.

They must have given last call at PJ’s.  Three young men with neckties undone and suits rumpled walk south talking at the annoyingly loud volume the intoxicated often do.  Their presence and revelry beg the questions about where they were on 9/11; do they even know the significance of the Ground just a few blocks away?  Who knows.  The Cynyx among us (certainly this Cynyc) can answer these questions – those young men are likely too young to fully understand, to recognize the profundity of the ceremonies concluded hours ago in this neighborhood.  Perhaps they viewed the highly visible Police presence and the metal barriers that cordoned off access to The Glade as an annoyance, an inconvenience to be tolerated on their way to work and to the tavern afterward.  Such is life.

Thousands of innocents got up and went to work in the WTC on this day 17 years ago never to return home to their families.  For 343 MOS of the FDNY, 37 MOS PAPD, 23 MOS NYPD the Twin Towers were literally their “Last Call”, they answered the calls to respond, went about their business escorting, carrying or even dragging an unknown many to safety.  They truly personified The Ultimate Sacrifice, a brand of dedication and devotion that often separates those with a calling for public service from everyone else. This is not to value some lives more than others; not at all. It stands as fact that as thousands descended via the stairways, many dazed, confused, and injured hundreds of First Responders determinedly made their way upstairs. There were also unknown accounts of bravery and sacrifice among the civilians who found themselves in a living hell. All involved found themselves choked between circumstance and happenstance, a nightmare scenario where the few reacted to help save the many. If not for the efforts of all, God only knows what the mortality rate would have been.

The breeze has picked up a bit and the clacking sounds of the mooring lines affixed to the yacht piers have gotten more noticeable.  Maybe it’s high tide.  There is a hurricane brewing off the Carolina coasts, maybe that is already exerting itself out in the Atlantic.  The dark harbor is busy tonight; tugboats maneuvering barges, oilers off the coast of Staten Island can be seen from a certain angle.  Looking north the glittering jewelry that are the spans of the George Washington Bridge are visible if one knows exactly where to look.

Everyone who came down to the 9/11 Memorial and observed the remembrance came looking for something.  Some, if they knew exactly how to look, not where to look but how to look may have found that which they sought.  There can be comfort in the rites, the rituals can serve as commemorative railway tracks keeping the seekers on a strictly defined path.  That path is towards tomorrow and all the tomorrows to follow; their suffocating sorrow may be a bit diminished by having spent the morning on that Sacred Ground.  As this day is about to blend in to the next we say a final prayer.  We pray for the dead and the dying, for each other and ourselves.