SEPTEMBER 11, 2001 - IT IS NOT OVER: FOR ONE FAMILY A DEFINATIVE CONCLUSION


FOR SOME, IT NEVER WILL BE
FOR THE LAVERTY FAMILY CLOSURE AT LAST 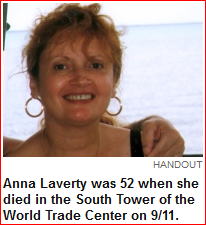 (October 25, 2012, OCMENYC, New York, New York)   Amputees often tell of mysterious episodic bouts of excruciating pain, itching or other nagging sensation in the limb that is no longer part of them.  This phenomenon of “phantom limb” pain is well documented in the medical literature and, as those who have experienced can attest, it is the fiercest pain they have ever known.  It is also pain that cannot be relieved, soothed, or alleviated in any way.  That frustration alone is maddening.  There is a simple physiologic – neurologic explanation for this torture.  The pain or whatever the sensation that can drive an amputee to tears resides in a cluster of neurons that have spent a lifetime communicating with that now absent limb.  The nerve connections in the brain do not fully realize that this part of their domain, this amputated extremity is in fact gone.

As with the merciless pain of a phantom limb so it is too for the family of a loved one who dies and their body is never recovered.  To lose a family member is painful enough but most of the time they have the opportunity to say goodbye; to mark the passing in whatever traditional, religious, spiritual, or secular way they respect.  As the most ancient of excavated sites from antiquity have shown, funeral and burial rites and ceremonies have been part of human history since the dawn of our species.   Even in ancient civilizations where the cultural practice called for the corpse to ultimately be consumed by a blazing funeral pyre or simply blessed and sent off to quietly drift away into the vast depths of the sea, at least the family and community at large was able to engage in the symbolic ritualism that was an act of finality.  Mourning and grieving periods have no time limit but, was the ceremonial rite is concluded, the good byes and blessing said, that phase of the process allows for healing and comfort to eventually settle in the hearts and mind of the survivors.  It appears to be that man has an inherent need, a genetic imperative associated with the passage of a loved one from life to death, to be an active participant in that transition.

When we hear of stories of children abducted and never found as human beings we can identify with that horror.  Men and women have died in military conflicts, natural disasters, and as the result of homicidal lunacy and never been recovered.  Hikers are swept into unknown snowy graves from avalanches; search parties will drag lake bottoms for weeks on end searching for a drowning victim.  The United States military and, in particular the proud members of The Marine Corps will risk their own lives to retrieve that of a fallen brother because they simply “leave no man behind”.  To this day there are elderly couples in The Bronx and throughout America who sometimes lay awake at night wondering in which anonymous rice paddy or godforsaken swamp did my boy die in Viet Nam?  That is an aching grief they will carry to their graves.

Eleven years after that horrific day in Lower Manhattan that is seared into the national consciousness and in the hearts and souls of New Yorkers, residents of the Metro NYC Tri-State area and most especially those among us who survived it and labored at that brutal site for months in the recovery efforts, one of the victims of that day was positively identified after a repeat DNA analysis put a name, a face, a life and history to a microscopic cluster of subcellular material.

Anna Laverty of Middletown, New Jersey, was identified late last week by technicians in the Office of the Chief Medical Examiner of New York City.  We pause here for a moment to offer our prayers and support for her family.  The word often bantered about in cases of the unrecovered deceased is “closure”.  That is far too simple a word to carry the magnitude of what a positive identifications means for the Laverty’s after eleven long years of what could only have been gnawing pain.

In a cold, dispassionate, and practical sense it was a crime scene, albeit a crime scene of unprecedented proportions infused with emotional, if not sacred significance, for a large number of people across the diverse spectrum that is New York City and its Metropolitan Area. The sheer number of fatalities contained within this hulking, smoldering 16 acre debris field that soared to over 10 stories in height in some places and continued below ground for another seven stories, put it in a class of its own. The nature of the deaths and destruction, a blatant act of war on our soil, in our City, forever sanctified this plot of real estate and everything that would be removed from it.

From the very beginning, while the smoke and dust still obscured the bright September sun, the task at hand appeared monumental, insurmountable. As the hours of that day of infamy bled away and the darkness of the early September 12th, 2001 morning shifted the wind ever so slightly to the west, every man and women whose fate had placed them there grudgingly admitted that this would not be a mass rescue mission; it was realized that early on that it would be a recovery effort.

Initial assessments and carefully orchestrated forays into the wreckage by members of FDNY revealed a level of devastation that would most likely not yield any survivors. The incessant electronic pings from the hundreds of fire fighters location beacons punctuated the silence. Certainly there were unknown thousands who perished, whose remains were held captive by the forbidding steel and concrete mountains that just mere hours ago had been two towering office building, 220 acres of office space where 50,000 or so came to work every day. Head counts continued frantically into the dawn of the 12th, every FDNY House and NYPD Precinct, all the government agencies who had office space in buildings throughout World Trade Center Plaza, as well as all the employers in Tower I and Tower II needed to determine who was missing, who was not, and who had been where and when that morning prior.

The cleanup that ensued over the 8 months immediately after the events of 9 11 01 will be studied by engineering, demolition, excavation, and other construction trade specialists for years to come.  It was a logistical nightmare tamed by the minds and backs of all those called upon to participate.

As a crime scene it too will be studied and recognized as a seminal undertaking in the history of forensics, mass fatality events, crime scene processing, DNA identification, and a host of other sciences that were utilized during every step of the recovery.

Not only was every square inch of debris scoured on site at The Pile, it was examined just as closely, if more slowly, once it arrived at the Fresh Kill Landfill.  Mining equipment from Pennsylvania and West Virginia was set up.  Conveyors and sifting trays of increasingly finer gauge trapped fragments of tissue as well as remnants of personal effects such as jewelry.  Whether an individual fragment of human tissue yielded sufficient viable genetic material for the rigors of the identification process was another story.  No matter, each captured fragment was handled as if it contained the treasures for a positive identification and with the respect afforded a corpse at burial.  Nothing was taken lightly, nothing dismissed as irrelevant.

In the Common Book of Prayer the Burial of the Dead, Rite I, contains the phrase “ashes to ashes, dust to dust”.  And so it is.

In a sense the remains of the unidentified have already been spread by the prevailing winds of that day as well as by the otherworldly gusts that billowed as the pulverized constituent elements and over 2000 souls wear reduced to their most elemental forms.  Those angry roiling clouds of smoke and dust spread far beyond the immediate area.  Some particles from those clouds went high into the atmosphere were caught in the jet stream and whisked far and wide.  Others came to rest much closer to their point of origin.  In either case all the remains, as they are, could never physically be recovered.  Having had over 20,000 “biologics” recovered was remarkable but never satisfactory.  The best efforts were exerted in the pursuit of remains.

The names of the unidentified are known today.  Families and friends, colleagues and coworkers, neighbors and acquaintances have mourned appropriately.  Those who perished are not forgotten nor will they ever be.

So for many of us who live with the sights, sounds, smells, and images that occupy our dreams, Anna Laverty is a victory.  That she is now known not just as a series of familial memories but as a human being who perished in the most unimaginable manner possible, her most intimate, primitive genetic secrets revealed so her story could be completed, is a gratifying humbling recognition long overdue.

To the entire Laverty Family and all those who knew and loved her, we say “Amen”.