ISRAEL UP TO OLD TRICKS?

TEHRAN BOMBINGS HAVE “ALL THE SIGNS”
OF MOSSAD 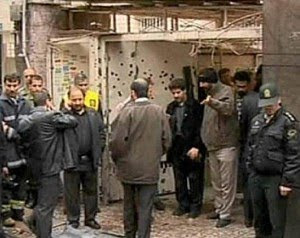 Massoud Mohammadi, a professor at Tehran University, was killed on Tuesday when a bomb strapped to a motorcycle was triggered by remote control outside his home.

There was a time when we would have had a leg to stand on, when the United States possessed sufficient “moral authority” to at least be in the position to do or say something. Something with some meaning, some heft, some weight behind it. Sadly, those days are gone for good and, at least for the time being, gone also is our international standing and reputation. The Cheney / Bush Administration saw to that. Now, we have a torrent of “leaked” information from diplomatic correspondence and other sources from which the world can draw their own conclusions about the United States, our veracity, our ability to be a friend and “honest broker” when it comes to some of the most delicate of foreign relations and dealings with the world at large.

Two prominent physics professors were blown up earlier today in Teheran by as yet to be identified operatives. The bombings have all the hallmarks of The Mossad, the Israeli Intelligence Service known as much for their ability to carry out assassinations across all borders as they are for “gathering” intelligence. One of the “nuclear scientists' killed as was his wife, the other targeted academic survived with injuries. Yes. It was a matter of time. Israel simply cannot stand the fact that she will at some point have nuclear armed neighbors.

And why should her neighbors not be nuclear armed? The oh so tired and all too often repeated claim that poor Israel, the only “democracy” in a sea of hostile Arab nations, needs to be able to “defend” herself just doesn't cut it anymore. Actually, it really never did. Israel has been a nuclear power for decades although, to this day, she refuses to acknowledge or admit the truth. Israel was provided all the “nuclear secrets” she needed to develop her own nuclear weapons program by spies and sympathizers decades ago. That is just one among the unknown and unknowable host of “secrets'”she has either directly stolen from us or had deliberately obtained by other nefarious activities. Israel has arguably perpetrated the greatest number of espionage scams against us than any other nation “friend” or otherwise.

Yes, Israel, our “Ally” in all matters of security. Israel, who we routinely provide carte blanche coverage for in the United Nations no matter how heinous her actions may be. Israel who criminally prosecutes a decades long occupation against the Palestinian people, murders men, women, and children with American supplied arms of every caliber and kind. Israel, the Zionist state immune from international and United Nations sanctions of any kind, free to murder and maim with impunity; possessed of sufficient hubris, safe in the knowledge that she can hide behind America's fraying apron strings when the international outrage becomes too hot, yes Israel has done it again.

The bomb attacks on two prominent Iran nuclear scientists is just the latest in a litany of international crimes committed by Israel in the factious name of her “national security.” Admittedly there is no evidence circumstantial or otherwise linking Israel to these assassinations however, the modus operandi is all too familiar to those in the international intelligence community. One former CIA operative now working in the private sector, speaking anonymously to protect his identity commented, “ As soon as I learned of the details of the attacks in Tehran, I knew, without a moment of doubt that this was the handiwork of the Mossad.” Other sources throughout Europe and the Middle East were equally harsh in their assessment of what are broadly considered to be “terrorist actions”. Lord Philip Lloyd Dunham, retired Scotland Yard veteran and Middle East expert commented, “Israel has a long history of violating international law, flaunting her brazen activities and generally conducting herself abominably. Sadly, due to her “special relationship” with the Americans, Israel has a sense of unaccountability. She has ignored UN Security Council Resolutions for as long as I can recall and I fear with each passing year she grows more emboldened. Israeli behavior of the sort seen in Tehran yesterday will, no doubt, one day trigger a crisis of massive proportions. I pray and hope that somehow something can be done to reign in what is, in essence, a rogue nation.”

Iran has long held nuclear ambitions and, despite American and Israeli beliefs to the contrary, has insisted their nuclear ambitions are for peaceful purposes. Long standing international sanctions of the materials required to refine uranium and conduct other highly sophisticated processes vital for developing nuclear power generation have denied Iran the ability to fulfill her desire. Despite repeated overtures from Iran to conduct her nuclear program under the guidelines of the International Atomic Energy Agency (IAEA) , the United States has spearheaded the sanctions efforts. Most objective observers however, agree that Iran should be permitted to develop a nuclear program until “ Iran demonstrates her intentions to be that other than power generation.”

Iran has had troubled relationships with the west and the United States in particular since the days of the Iranian Hostage Crisis in 1979.

Copyright TBC 2010 © All Rights Reserved
Posted by Brooding Cynyc at 1:45 PM No comments: