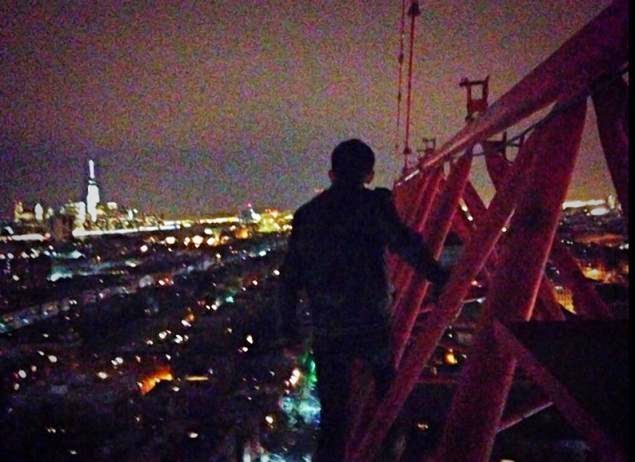 Justin Casquejo, 16, entered 1 World Trade Center
after crawling through a small hole in the construction fence and scaling scaffolding
on the exterior of the building.

(Thursday March 20, 2014, Vesey St., NYC)  From street level looking south the site from which the 1 World Trade Center tower rises all the elements of an active construction site are visible.  Behind wooden fences, areas of chain-linked fencing and small mobile trailers used by the many contractors and subcontractors, work continues on the skeleton-like Oculus that will stand above the PATH train station.  Though the 104 story tower and its massive communication rings, antennae and spire reach 1176 feet into the sky above, this location remains a very active construction site.  Given the significance of the ground from which this new tower arises one would think that security would be of paramount concern.  But, it appears, one would be disturbingly wrong.

In the early morning hours of last Sunday a 16 year old high school student from Weehawken New Jersey, Justin Casquejo, allegedly slipped through a narrow 12’x12’ slit in the security fence and entered the site undetected.  But, that is just the beginning of this story that seems incredulous and has laid bare a host of very serious security breaches pertaining to the site and 1 World Trade Center itself.  The young daredevil reportedly told Port Authority Officers that he had planned his stunt well in advance and needed only three visits to case the site before pulling off his bold caper.  That he was not only able to enter the premises undetected, climb six stories of external scaffolding, ride an operator controlled elevator and pass a sleeping security guard before making the final ascent of his daring stunt should be and is embarrassing and humiliating to the owners and operators of the site, the Port Authority of New York and New Jersey (PANYNJ).

During the nine months it took to remove the wreckage of the fallen Twin Towers that covered a 16 acre site of unprecedented destruction on United States soil, the questions were already being considered as to what, if anything, to construct on that valuable parcel of NYC real estate.  Architects and engineers made proposals and bids until a final decision was made.  Preeminent to all involved was constructing a symbolic edifice that would proclaim to the world, friend and foe alike, that no terrorist attack no matter how evil and cowardly, could ever shake our strength and resolve.  As our Military quickly routed al Qaeda and their hosts in Afghanistan, the Taliban, the debate here in New York City centered on what would be appropriate to build on such blood soaked sacred ground.  When the final architectural design was agreed upon and contractors and subcontractors chosen, the one guiding and unifying principle was to erect a towering building with safety and security the primary design component.

Just as the original Twin Towers required new and novel engineering techniques, 1 World Trade Center would also be on the cutting edge of structural engineering and all the construction trades.  It was an ambitious project with an ambitious goal; it was to rise to a height of 1,776 feet as that number is also the year the United States declared their independence from the United Kingdom. 1776 is a special number for Americans and it will forever remain so.

The design process was exhaustive and the engineers had to bring to life the architects dream while remaining true to the inherent element of security.  At one point in the construction then NYPD Commissioner voiced his strong opinion that the security on street level was not as robust as he thought it should be.  The balancing act between building a skyscraper with aesthetic value that would enhance the already spectacular New York City skyline and one that would be capable of surviving another terrorist attack such as that of September 11, 2001, was difficult.  Yet, all involved were able to meet the standards that had been set out for them in the specifics; safety and security were as much part of the specs as was any individual infrastructural system in the Tower. It now stands as the tallest building in the western hemisphere while its exterior’s graceful façade belies its hidden brutish strength.

HOW DID THIS HAPPEN OR, WTF?

Social media has brought us all manner of entreating video clips, blogs, v-logs, selfies, screen captures and real time broadcasting via cellular phones.  If one were to visit the heavily trafficked web site YouTube, it would become readily obvious that virtually any search term the user might pose will produce a number of “hits”.  Among some of the most recent trending video clips are of young boys scaling imposing heights and dallying about many hundreds of feet above the ground.  This trend seems to have originated in Russia but has quickly spread around the world attracting more and more audacious stunts.  For most of us the fear of great heights seems to be part of our genetic heritage, an innate uncomfortableness in being so far above the ground.  Watching some of the clips of Russian teenagers  flirting with death as a form of recreation is enough to induce vertigo in the rest of us.  Some of the clips posted out there in cyberspace are truly remarkable.  Apparently, the youngster from the New Jersey side of the Lincoln Tunnel, Justin Casquejo and his two best pals were sufficiently motivated to make their reputation in this odd acrobatic, death defying sport.  Aside from reaching the peak of 1 World Trade Center, they more than made their mark in the eyes of the PAPD, NYPD and other NYC law enforcement and security experts.  What their feats prove beyond their obvious nerves of steel and brass balls is that security at the site just a block from here is not simply inadequate; it is negligent and inexcusable.  What is the message those terrorists who oppose us are receiving as they too take note of this potentially lethal laxity of security?

WHERE IS THE PORT AUTHORITY?

Despite recent headlines implicating some of the highest ranking officials in the Port Authority in various corrupt schemes and actions, the men and women of the Port Authority police Department (PAPD) are an effective Law Enforcement Agency (LEA) tasked with the mission to secure wide ranging infrastructure throughout the NYC Metropolitan Area. The PAPD is a bi-state agency with jurisdiction covering all three major NYC Area airports, NY to NJ tunnels and bridges, bus terminals, the PATH train system and 1 World Trade Center.  Actually it was only recently that the PAPD was able to wrest control over 1 WTC from the NYPD.  As the lead LEA at 1WTC they have the full responsibility of maintaining the secure integrity of this site.  To learn that they have been outsourcing some of their responsibilities to private security companies is beyond disturbing; it appears to represent a lack of commitment and due diligence on the part of the Port Authority that leaves some of this area’s most vital infrastructure including 1WTC inadequately protected.

As the details of this stunt perpetrated by Justin Casquejo have been reported publically, there is a distinct degree of anger and frustration felt by all New Yorkers and particularly those who live in this Lower Manhattan neighborhood, many of whom were forced to abandon their apartments in the aftermath of 9-11-2001. “When I first read the article in the Post (New York Post) I was shocked.  My shock soon turned to anger”, commented Chris Lynch, a commodities broker and resident of Battery Park City on the southern tip of Manhattan.  Lynch continued, “I remember that day in 2001.  I remember all of it and how terrified my children were.  After all that happened and all the years since, I thought that the site was probably the most secure plot of land in the City.  It is deeply concerning that it is not.  If high school kids can get in, what does that say about security”?

The Port Authority has announced that they will conduct a broad audit at 1WTC in the wake of this security failure.  One local security consultant, a 33 year NYPD veteran contends that the “PAPD is unable to conduct an internal review objectively”.  However, there are those in the PAPD and the Port Authority in general who say that no “outsiders” need to be brought in to conduct a review of their policies and procedures.  But confidential sources in the FBI have acknowledged that their agency “will participate” in whatever security review will be conducted.

The fact that the PA has outsourced the security of the 1WTC has taken many by surprise.  From high ranking officials in NYPD to the Secret Service, FBI, and other federal agencies that will be occupying space in the new Tower, this breach of site security, including the fact that a security guard was “sound asleep” on the 88th floor as Justin Casquejo slipped by, is “reprehensible”.

As reported in today’s New York Times, “Though Mr. Casquejo seemed to be nothing more than a young thrill seeker, the breach raised questions about the level of security at the site, which largely remains a construction zone more than 12 years after the terrorist attacks on Sept. 11 destroyed the original World Trade Center”. The PA Chief of Security retired NYPD veteran Joseph Dunne continued in the NYT, “We take security and these type of infractions extremely seriously and will prosecute violators.” Dunne continued, “We continue to reassess our security posture at the site and we are constantly working to make this site as secure as possible.”

All we can do at this time is hope that this teenagers stunt serves as a wakeup call for the powers that be.  As one PAPD Officer noted earlier today who asked to speak anonymously due to his current position, “I always thought it was a poor decision to hire a bunch of rent-a-cops for 1WTC.  But, what can you do?  We go about our business, try our hardest to serve and basically hope for the best.  I guess we all see now that just hoping for the best is not enough.”