SYRIA: TO BOMB OR NOT TO BOMB


THAT IS THE QUESTION
THE SHADOW OF CHENEY & BUSH LOOMS LARGE 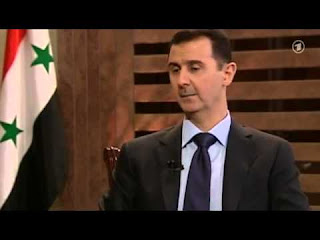 
purported to have deployed chemical weapons against

(Wednesday August 28, 2013, United Nations, NYC)  It was just a matter of time; it has been for several years now.  First we sit idly by and watch a profound grassroots surge towards democracy in Egypt and now we stand as silent witnesses to the atrocities committed by the regime of Bashar al-Assad in Syria.  The United Nations teams sent to Syria last week to ascertain if chemical weapons had been deployed there have come to a conclusion that amounts to an indictment of the Syria government.  Yes, the forensic and medical evidence are consistent with the use of a toxic chemical weapon such as sarin gas.  By all “standards” of modern warfare and international treaties the use of such weaponry is prohibited.  That the Syrian regime chose to utilize the most vicious element of their armament primarily against innocent, non-combative civilians including children violates every written and unwritten code of military conduct.

Despite the strength of the evidence collected by the United Nations inspectors and hundreds of first-hand accounts the United States should not intervene in this confusing Syrian civil conflict.  But, even if the Obama Administration was so inclined they will never be able to assemble a “coalition of the willing” because everyone has heard this song before; indeed the entire world has heard this song and the very credibility of the United States as a world force for good has forever been tarnished.  It was tarnished, stretched and frayed to the point of breaking by the outright lies and cherry-picking of uncorroborated intelligence by the Cheney & Bush neo-con Administration in their ill-fated build up to their unwarranted invasion of Iraq in 2003.  As the former New York Times columnist Frank Rich has called it, the ever changing rationale put forth by the Cheney & Bush team was indeed “The Greatest Story Ever Sold”.

Over the past ten years the machinations of the Messianic Cheney & Bush apparatus in The White House, Pentagon and CIA have been voluminously documented.  We need not revisit those facts now but we cannot turn from the facts regarding the irreparable damage they left in their wake in Afghanistan, Iraq, in the United Nations, among traditional allies and the wider world specifically among the 1.5 billion Muslims.  The irony of this circumstance is as profound as it is potentially crippling.  The “word” of the United States is no longer represents a valid and valued compact of honesty and trust.

Since the founding of this great Nation we have always maintained a largely conservative foreign policy regarding military intervention.  The prime component of our policy was a defensive posture not, as Cheney & Bush bastardized it as one of “pre-emption”.  While the war in Afghanistan began as a righteous cause it lost its legitimacy as it slowly morphed into a half-assed occupation with a US installed puppet government propped up by United States troops, support and a huge flow of billions of our tax dollars.  The war in Iraq was purely one of choice and never enjoyed the briefest period of legitimacy since the deceitful, deceptive tactics of the neo-cons were laid bare for all to see shortly after the toppling of Saddam Hussein and the lack of any evidence, let alone actual weapons of mass destruction, once touted as the most existential threat to the United States.

Saddam Hussein posed no imminent threat to the United States, had absolutely no connection with Osama bin Laden, al Qaeda or anyone else. The majority of the “evidence” put forth by The Administration, particularly by Dick Cheney’s operatives in The Pentagon was contrived, bogus, and patently false.  Bush & Cheney’s foray into Iraq not only forever altered our military history, was contrary to our long observed military philosophy, it made any future collation building efforts, any call for military action by the United States not grossly obvious for the entire world to see, a virtual impossibility. This is just one plank of the tragically awful and strategically handcuffing legacy of 8 years of neo-conservative doctrine as exercise by Cheney & Bush.

(Updated Friday, August 30, 2013)  President Barack Obama received a harsh lesson rooted in recent history today when he learned that our long time reliable and historically steadfast Allies, The United Kingdom would not stand with us shoulder to shoulder during whatever course of action Obama decides on in Syria.  While Obama has repeatedly emphasized his call for a “narrow limited action” after the use of chemical weapons by the Assad regime in Syria, the United States will have to go it alone.

The international community, especially countries in the Middle East and Asian Subcontinent are more than a little skeptical about the United Nations inspectors claims that chemical weapons were used and even more skeptical about the intentions of the United States militarily.  They can still hear the self-righteous echoes and single-minded saber rattling of the previous Administration; they remember the Cheney / Bush “war of choice” in Iraq waged under an umbrella of extrapolations, fabrications, and outright lies.

President Obama faces challenges to the legitimacy and credibility of the United States and our military and intelligence infrastructure as a direct result of the reckless actions of his immediate predecessor and that Administrations disregard for the truth.  This is just one of the several laws of unintended consequences that will surely impede United States foreign and military policy and initiatives for years to come.