NO NEED TO INSINUATE OURSELVES INTO THIS CAULDRON

TEHRAN AND OTHER CITIES SEE LARGEST CROWDS OF PROTESTERS SINCE 1979


(June 20, Paterson, NJ) IRAN has been a four letter word in our political lexicon ever since Ayatollah Khamenei took the American Embassy with 56 American hostages captive in 1979. Actually, Iran has proven to be a tenacious thorn in America's side ever since. That unanticipated “Islamic Revolution” caught our intelligence services with their collective heads up their asses and actually swayed our Presidential Election that year. If not for the “Iranian Hostage Crisis” Ronald Reagan, arguably, may not have been elected President.

Here in this gritty, deteriorated, former industrial city just 11 miles from New York City a large Islamic Community has taken hold. Iranian immigrants constitute a substantial segment of Paterson’s population and, as could be expected, emotions are running high as the aftermath of last week’s election in Iran are playing out on TV for all the world to see.

While the hapless, moronic chatter from the Republican, tone deaf, obstinate, sputtering heads are advocating for a stronger United States response to the upheaval in Iran, virtually all the Iranian immigrants spoken to here believe that President Obama is doing the right thing by not overtly supporting the protesters and opposition movement.

Indeed, most believe last week’s election to have been most likely rigged. The fact that the hard line, controversial, incumbent, President Mahmoud Ahmadinejad appeared locked into a tight political contest with his main rival opposition leader Mir Hussein Mousavi, only to be declared the victor by a ‘landslide’ margin of over 62% of the national vote, triggered the vocal and increasingly violent public demonstrations that threaten Iran’s very stability.
The overwhelming majority of regional experts and others intimately familiar with America’s troubled history in Iran, assert that the president is taking precisely the correct, prudent position at this time. This is not an “American” fight and, if President Obama was to come out vocally in support of the opposition movement, then the current regime and the Supreme Leadership Council would be able to proclaim this grassroots uprising as an “American led” effort.

A top ranking analyst working the Iran desk at the CIA, speaking anonymously commented, “The worst actions Obama could take would be doing anything that even appeared to be taking sides in, what is essentially, an internal political revolt. France and Germany can publicly condemn President Ahmadinejad, the Clerics and the rigged elections. They were not designated “The Great Satan” by the Ayatollah 30 years ago. For all these years Iran has used America as the reason for all their problems. Now is not the time to help perpetuated that dangerous myth.”


Copyright TBC 2009 © All Rights Reserved
Posted by Brooding Cynyc at 3:53 PM No comments: 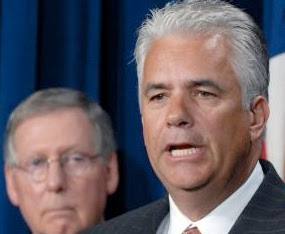 
(June 16, Las Vegas, NV) A heart of stone, a house of glass and balls of brass - just another hypocritical Republican politico caught with his pants, and morals, down around his ankles. John Ensign, a “rising star” among the beleaguered GOP team has admitted to an extramarital affair with a campaign staffer. So what, right? except that this was one of the most vocal critics blasting president Bill Clinton for his sexual infidelities and has long been a champion (in words only) of the cherished GOP “Family Values.” Oops, John. Yes, the affair allegedly occurred while he was “separated” from his wife but it was not just any affair. He was boinking a woman staffer whose husband was also a “friend” of the wandering Senator. NOthing like wrecking two homes with one shot, eh, John?

Maybe what happens in Vegas stays in Vegas but, when it is a sexual affair involving a United States Senator, such an event quickly spreads from the desert “City of Sin” into the corridors of the Capitol in DC. While nevadans may take a cavalier approach to sexual peccadilloes, the base of the GOP certainly is less forgiving.

Ensign is not up for reelection n 2010 but, in some quarters, his name had been bandied about as a possible VP or even Presidential hopeful in 2012. He recently completed an abbreviated tour of Iowa, the home of the “First in the Nation” Iowa Caucuses - an event that often makes or breaks campaigns in their infancy. Since Iowa has no legal brothels, the sexual mores of the hardcore republican base in Iowa may raise an eyebrow over Senator Ensign’s adulterous ways. Who knows?

At least John is not lonely; nope, not at all. he is the newest member in the exclusive club of GOP philanderers and crooks, of those toppled from their pedestals by the basest of human motivations and the absolute arrogance that comes with their Office. Newt Gingirich, Bob Livingston, Larry Craig, Mark Foley, and, of course, Bubba Bill Clinton himself who seemingly has set the “gold standard” for what you can and cannot get away with anymore.

The sad and sorry fact of the Republican witch hunt of Bill “So I Got A Blow Job” Clinton is, that while they were preparing for his impeachment, a small band of extremists in Afghanistan known as al Qeada, was hard at work pursuing their own “enemy”. We learned about them on September 11, 2001.

That just goes to show us all, the real threats are ignored or overshadowed by the “inside the Beltway” bullshit that has allowed our Legislative Branch to be held hostage by their own petty struggles, venomous partisanship and a complete disregard for the “Greater Good” - The American People.

Ensign’s rising GOP star is now probably just a flaccid, fading dream. Good. He and his ilk have been brought to their knees, no pun intended, by their own hubris, arrogance and righteousness time and time again.

Let’s just wait and see who the next swinging dick to get exposed will be. It’s just a matter of time.

Copyright TBC 2009 © All Rights Reserved
Posted by Brooding Cynyc at 5:20 PM No comments: