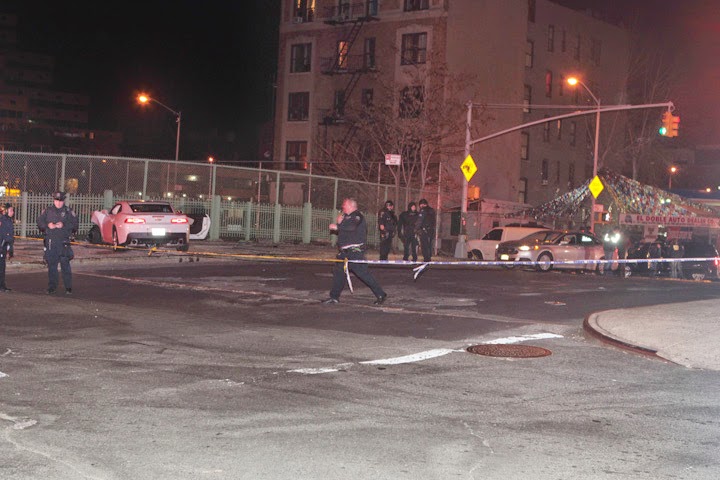 Scene were fleeing suspect in the shooting of two Police Officers


in The Bronx last night crashed a vehicle he had carjacked


as his getaway ride.


BAD RELATIONS BETWEEN MAYOR AND MOS OF THE NYPD,


TEMPORARY DROP IN CRIME NOT RELATED TO MORE

(Tuesday January 6, 2015 181st St. & Ryer Ave., The Bronx, NYC)  The five member anti-crime unit was at the end of their tour for the night.  They had spent the night working in plainclothes in the street of one of the few remaining Precincts that has not been as amenable to achieving the dramatic decrease in crime as most other Precincts have over the past few years.  Based out of the 46th Precinct just down the block from here, this Precinct sits in the Fordham section of The Bronx uncomfortably wedged between the neighborhoods of Belmont, Morris Heights, and Tremont.  When the call came in for a “Robbery in Progress” the five anti-crime Cops piled into an unmarked car and drove rapidly to the scene of the crime. Upon arrival at East 184th and Tiebout Avenue they followed common tactical protocol and separated into two teams. Two Officers cautiously approached a lone man idly standing in front of a Chinese restaurant just a few doors down from the deli where the call had originated from.  As they approached and ordered him to position himself to be frisked, a gunman inside the Chinese restaurant began shooting at the Officers through the window of the eatery.  He continued shooting as he ran out into the chaotic scene as the Cops returned fire.  The suspects all fled in different directions.  One showed up at Emergency Room in Columbia Presbyterian Hospital with a gunshot wound in his back after obtaining his getaway ride from a friend. Another fleeing suspect carjacked a Camaro which he later crashed and fled that scene on foot. By 1 o’clock this afternoon the other two suspects were apprehended, without incident, and are currently being held for questioning.  The NYPD’s investigation of the crime is on-going but a source close to the investigation speaking not for attribution commented that the NYPD believes they have the actual perpetrators in custody.

Police Officer Andrew Dossi, 30, was shot in the lower back and arm, and is listed in critical but stable condition in St. Barnabas Hospital while the second Police Officer, Aliro Pellerano, 38, is listed in stable condition in the same hospital.  Both are expected to recover from their wounds although doctors have been careful when discussing the recuperative process particularly for Officer Dossi, an Iraq war veteran and current Reservist.

There was a time not all that long ago when New Yorkers would hear or read about an incident such as this and simply ascribe it to “The Bronx” as if that Borough was on a different planet where chaos and crime ruled, where danger and disorder lurked in every doorway, alley and subway station.  But, as has been widely reported and rightfully so, the crime rates in all categories of crime are at all time, historic lows.  This did not happen overnight and is the direct result of the concerted efforts of the men and women of The NYPD over the last 21 years. It was just hours before this shooting incident in The Bronx that Mayor Bill de Blasio held a press conference praising the dramatic drops in crimes of all sorts and praising the NYPD at this time of unprecedented strife between a NYC Mayor and the NYPD.

Much is being made in the media and within City Hall that the NYPD is engaged in some sort of “job action” or “work slowdown”.  On the surface, the issuance of summons for misdemeanors, traffic and parking infractions and other activities that might have warranted a “Stop, Question and Frisk” (SQF) being conducted have dropped so rapidly and dramatically that it is easy to correlate some manner of a work slowdown with the numbers compared to this time last year.  Those who have been the most strident and boisterous opponents of the Broken Window theory of which SQF is a key component, are using this drop in arrests, summons, and Police activity in general as proof positive that the City will not slide back to the dangerous, gritty days of the 1980’s, if the Broken Window practices are curtailed permanently.  This notion is akin to whistling through a graveyard; it is an unsound assumption particularly given the short span of time they are using to illustrate their “proof” while all it really amounts to is conjecture and extrapolation.  One would be a fool to believe that these low numbers will hold for any significant length of time or that they are a true reflection that the criminal element in NYC are undergoing a collective spiritual reformation.

It is unlikely that the criminals in NYC, the petty thieves and street thugs, the muggers’ and marauders, the stick-up men and armed robbers are sitting in their apartments watching the imbeciles on MSNBC announcing to their gullible audience that since the Cops have “backed off” and let some infractions “slide” that they will abandon their criminal ways and that the Broken Window theory was wrong; that current data proves that simple-minded point.  Actually, just the opposite is more likely to occur.  Make no mistake about it, the criminal element reads the papers and may watch the news. Moreover, they are certainly especially, acutely attuned to the rhythms and tempos of the streets and they are watching; taking notice, and will soon begin to assert themselves and take advantage of the NYPD’s less aggressive, more “passive” approach.   And, it will not take long.  Criminals, by and large are, by their very nature predators and opportunists, constantly surveying the landscape for easy targets and quick money.  The drug trade in all its ghetto, housing projects distribution and dealing sophistication and complexity, will certainly ramp up their operations while the “coast is clear”, if you will, and the NYPD seems to be on a working “vacation”.  There will be more illegal guns coming into our City and out on the streets that will no doubt be used during the commission of a crime.  Law Enforcement Agencies up and down the Interstate 95 “Gun Corridor” are also adhering to more cautious approaches in stops along the highways for the same reasons Cops everywhere feel the unfamiliar weight of a literal target strapped to their backs.  Nothing happens in a vacuum; there is a connectivity and “cause and effect” relationship inherent in the world and certainly in the often high stakes “cat and mouse” game between Police and those intent on breaking the law.

The facts of the matter are that the Police are not conducting an intentional “job action” and are nowhere approaching violating the Taylor Laws of 1967 that forbid them to do so or to go on strike.  If anything the NYPD is exercising extreme caution out in the streets since two of their own were assassinated as they ate lunch in their patrol car. First to arrive at a call are now often waiting for backup to arrive when responding to a specific type of call in order to minimize the risk to the innocent citizens as well as themselves.  This is solid Police practice given the open hostility on display towards the NYPD and Law Enforcement Agencies all across the country.

The fallout from this never before seen division between City Hall and the rank and file members (MOS) of the NYPD is that the City is being deprived of the full services they have come to expect from their Police Department.  While there is no work slowdown in progress and the comparatively low numbers in the statistics from this time a year ago is a blip on the radar screen, the MOS are considering multiple variables before they engage with civilians on the street.  Mayor de Blasio’s support for the misguided, vocal anti-Police activists and demonstrators was the first shovel stroke in creating what has become a yawning chasm roiling with bitterness, rancor, frustration and plain old fashioned anger.

It is merely a matter of time until the hardcore criminal element begin to assert themselves and try to exploit for their benefit the hostile and tense environment in the streets, in Precinct houses, as well as the more cautious approach in posture and stance the NYPD has adopted in the face of many numerous death threats from gangs, thugs, pretenders, dead enders and wannabes who’d like nothing more than to achieve the twisted “street cred” that is bestowed on any such scumbag who shoots at or kills a Cop.  The last thing Our City needs is an emboldened criminal element, particularly violent offenders of the type who walked into a deli The Bronx last night to rob it and ended it with a wild shootout with the five Officers from the 46th Precinct’s anti-crime unit.  Cause and effect; for every action there is an equal and opposite reaction.  These may be principals of physics and dynamics but they are just as appropriately accurate in society and within our culture, a culture already too violent and often crassly callous.

We can hope that soon, very soon, those in the positions to begin to rectify this awful situation will be able to do so.  If the Cops on patrol throughout the Five Boroughs tonight are feeling a bit more vulnerable than they did a few months ago or, are keeping their heads on swivel mode for their entire tour since last month’s ambush killing of Officers Liu and Ramos, how should the general public react?  How safe do they feel tonight compared to this time last year?  The Mayor who promised to be “the Mayor of all New York City” should realize that the NYPD is the very backbone of this City and he should end his dangerous charade of political expediency that sacrifices the public and Police safety.

The clock is ticking Mr. Mayor…

Shootout In The Bronx Links: