MEMORIAL DAY IN THIS AGE OF PERPETUAL WAR


LONGEST WAR IN OUR HISTORY
CONTINUES WITH NO END INSIGHT 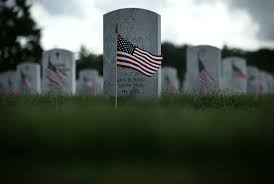 
THE LETHALITY OF ARMED CONFLICT, REMEMBERING OUR

(Monday May 30th, 2016 Pier 86, NYC) The retired vintage WWII aircraft carrier turned museum, the USS Intrepid is permanently moored to Pier 86 at W 46th St & 12th Ave. on the Westside of Manhattan and stands as an impressive piece of naval hardware.  To walk her flight deck though, it is not hard to imagine just how small a vessel it was out in the often raging open seas.  It is dwarfed in sheer size and technological capability by the nuclear powered “Super Carriers” of today.  Today’s carriers are literal floating cities boasting well trained crews of over 5,000 sailors while serving as home base for up to 75 various types of aircraft. The superior advancement in technology and science in all disciplines as evidenced in our daily lives is also on display in the military machinery from our aircraft, warships, and field artillery and infantry equipment, to our aircraft, satellites, helicopters and drones.  From the development of Stealth aircraft architecture to radar, sonar, “smart” bombs and other munitions technology has revolutionized modern warfare so totally that most of what is taken for granted today could not have even been dreamt of a few decades ago.


What has never changed about warfare is its lethality.  Sure, our weapons can be launched from afar to deliver death quickly and efficiently.  Unmanned drones are controlled by “pilots” half a world away from the battle fields.  Our Army Air Force, Navy and Marine Corps boast the best trained and equipped troops the world has ever seen but death, to most the main goal of meting out death to our “enemy” is as old as our species.


We seem to now expect our battles to be served up cold.  We are willing to engage whomever where ever provided we can do so with as few “boots on the ground” as strategically and technologically possible.  This is, of course, naïve and, as a practical matter, it is simply not realistic.  Military conflict be it of the “conventional” strategy and tactics fielded for centuries, or the newfangled “asymmetrical warfare” we confront today, still requires putting members of our military into “harm’s way”.  There is no way around it if the mission is to be successful.


Now, in our 15th year of perpetual war on many far-flung “battle spaces” as they are euphemistically called, we have time and again asked our military to serve multiple deployments, to do “more with less” as was the credo of the Cheney/Bush era failed Secretary of Defense Don Rumsfeld and his “neo-con” acolytes, as we continue to spend our precious blood and diminishing treasure in so many ill-defined battle spaces where tangible “victory” may never be realized.  Still our troops fight on.  According to a recent status report by the Joint Special Operations Command (JSOC) there are currently Special Forces including Navy SEALs, Army Rangers and Delta Force, USMC Maritime Raid Force (MRF) operating in over 100 countries.  Let that sink in; we have some of our most elite troops spread around the world in over 100 countries.


Our troops are doing what they have always done.  They are fighting, largely anonymously, and dying in the same manner.  Even their own families, their closest next of kin have scant information regarding where their sons and daughters, brothers and sisters, mothers and father are fighting and dying.  Since the inception of an “all-volunteer” force the once shared sacrifice of military Service is borne by less than one tenth of one percent of our population.  And on this day more so than any other, we are compelled to mourn our unknown, unseen, “anonymous” dead.


There is something lost in translation regarding Memorial Day.  Billboards and placards displaying “Happy Memorial Day” are missing the mark.  There should be no “happiness” in Memorial Day.  It is, after all, a day specified to honor our military dead, those who perished on land, sea and in the air in all our collective wars.  Included also are those who succumbed to battlefield injuries after the fact. This is not to suggest that this holiday be a dour time for the families of those lost during our military conflicts.  Not at all. This is the time to remember who they were and what they did for the greater good.  The time for “happiness” in celebration is Veterans Day for that is the day we honor and yes, celebrate, all those who have and are currently serving in all branches of the Military.  The distinction between these two national holidays is not simply a matter of description but an important point of order.


Death is our great equalizer.  We all will die one day of causes from the mundane to the unexpected and every condition and circumstance in between.  Those who are called to fight our wars live with death, the unlikely combination of man’s fragility and resolve; of that which motivates those we call our enemies and what it takes for our Military to defeat them.  The battlefronts of today are like none before.  Terrorism, the rabid, radical Islamic stock in trade presents challenges for our Military and domestic Law Enforcement the likes of which remain relatively new and novel.  But that harsh reality is but a side bar to the truths that have always defined warfare.


In the earliest days of our continuing war against radical Islamic extremists, a large percentage of our standing Military Forces had enlisted primarily to earn the right to aide for their higher education.  Most of those enlistees having joined during a period of peace for the United States had never really considered the fact that they might one day see combat action in some far off land.  For many of them serving in the Reserves and National Guard it was only due to the attractive financial incentive that motivated them to enlist.  Little could any of us imagined up to September 11, 2001, that our nation would be thrust into an asymmetrical war with a terrorist element, a network of Muslim jihadists, the vanguard of which would deliver a devastating blow in the form of four suicide attack hijackings that brought down the formidable Twin Towers in NYC, severely damaged The Pentagon, with the last plane crashing into a remote field in Pennsylvania as the doomed passengers fought the hijackers.  Yes, our world, and our role in it was forever altered by the events of that clear blue sunny Tuesday in September of 2001.


Our young service men and women more than rose to the challenge.  As the rightful battle campaign in Afghanistan quickly vanquished the Taliban and cornered Osama bin Laden and the surviving cadre of al Qaeda in the rugged mountainous region of Tora Bora it appeared that total ‘victory’ was at hand.  But, our troops were betrayed by the Cheney/Bush neo-con agenda determined to attack Iraq and topple the brutal regime of Saddam Hussein.  This shift of focus has proven to be disastrous.  Had we finished the mission in Afghanistan and began to assist them in finding their own tribal ways towards peaceful coexistence without the iron-handed rule of the Taliban and their misguided interpretation of Sharia law, the mission would have wound down perhaps as early as 2003 or 2004.


But, true to form and in the proud tradition of the United States Military, our troops adapted and responded to the task at hand.  They had no way of knowing that the ill-conceived incursion into Iraq would spawn an insurgency, internal conflict, and ferocious resistance to the US Military presence.  Some of the battle grounds will go down in history as so many other battlefields from our past have.  Places like Ramadi, Fallujah, Mosul, Tikrit, Baghdad, and more anonymous stretches of desert and land will become part of Army Navy, Air Force and Marine Corps lore.


We are right to memorialize our war dead on this day.  There are plenty of other days to raise a fist, wave a flag, apply some patriotic bumper sticker, or generally boast about what a bad assed country we are ready to open a can of whuppass on any one who dares cross us.  This is the low brow idealism of those who have never worn the uniform, who have never known the brutality of combat, who have never been indoctrinated to sacrifice their life for that of a fellow brother in arms.  And, perhaps, that is just fine.  The military is certainly not everyone’s calling.  But there is the tremendous distinction between patriotism and service, between love of country, life and liberty and the bonds formed in the white hot heat of combat for it is from those bonds that cohesion among our troops is forged.


We mourn those killed in action and should pause for a moment during the backyard barbecue, shopping spree at the mall, or whatever activity we choose on this three-day weekend to recognize the sacrifices of our young men and women who went to war and never came back.

Posted by Brooding Cynyc at 2:05 PM No comments: