THE TRAGIC DEATH OF YADIRA ARROYO


IN THE LINE OF DUTY 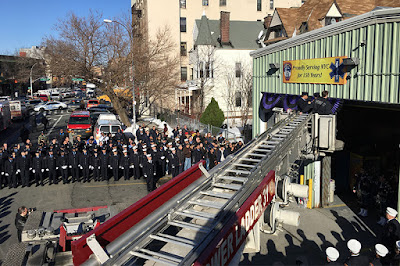 
AS MOURNING BEGINS FOR YADIRA ARROYO

(Friday March 17, 2017 Boston Rd., The Bronx, NYC) Just south of the intersection of Boston Road and 169th Street here in The Bronx sits the FDNY EMS Station 26.  The EMTs and Paramedics working out of this House serve the people of the Central Bronx including the Soundview neighborhood.  It was while responding to a call for assistance from a pregnant woman in Soundview that FDNY EMT, 44-year-old Yadira Arroyo, a mother of five sons, had her life taken in the Line of Duty.  In this day and age as well as in our City it is easy to become calloused, inured to the senseless violence we coexist with.  While NYC has the lowest crime rates by any metrics employed and is easily the Safest Big City in the USA, the circumstances and happenstances of random acts of heinousness can never be eradicated.  There will always remain among us blackened, evil souls with murderous intent, completely devoid of any shred of regard for life.  A few blocks from here last night two polar opposite lives intersected leaving Ms. Arroyo dead in the street, just one of the many streets she knew so well both as a Bronx resident and a 14 year veteran of FDNY EMT.


We’ll spend no time here nor waste the space to make any mention of her alleged murderer.  His is a story no one among us should have any interest in.  The legal/judicial process will play out in its infamously snail-like pace, and he will be afforded a defense pursuant to our criminal justice laws.  No, this is not about him.  This is about a public servant, a dedicated mom known widely among friends, neighbors, and coworkers as a shining soul of decency, compassion, and love.  Yadira Arroyo will forever be honored, remembered, and respected for her service and sacrifice.


FOR WHOM THE SIRENS WAIL


We live in an unquiet City; a densely populated highly diverse urban landscape home to over 8.7 million residents.  The acoustics of our building lined streets, broad avenues and arterial boulevards do not absorb sound as much as they deflect it outward and upward to be carried through our concrete canyons.  Brick and mortar, concrete and asphalt, stone, steel and glass are solid and do not absorb the elements of the omnipresent cacophony that is the soundtrack of our City.  The din is familiar and variable; it ebbs and flows with the cycle of days turned to nights, in our City that famously never sleeps.  The low-grade collective pulse we’re so attuned to that we don’t even always hear it is regularly punctuated by the wail of sirens; NYPD and FDNY responding with haste to whatever scenario prompted a 911 caller to request emergency help.


Over 30,000 calls are made to the 911 system every day in NYC; yes, 11 million times a year calls are placed and the appropriate Department is dispatched to respond.  Typically, we give little thought to what seem to be an incessant Doppler effected screech of sirens moving to and fro.  Each of those sirens represent an event, from the mundane to the epic that transpire within the confines of our Five Boroughs with regularity akin to the tides that rise and fall around us. Often a serious, very real human crisis has prompted a call to 911, the nature of the call determines which Department is initially dispatched to the scene.


Each warble of a moving siren represents a drama playing out for someone somewhere within hearing distance.  We can pause our thoughts to imagine what might be going on and, even if we do, the minutia of that which takes up the most space in our consciousness comes flooding back.  Perhaps whatever the sirens were responding to would be sufficiently newsworthy to make the papers or the TV news the next day.  Typically, it is not.  The jagged edged truth of the matter is that each of these dramas requiring NYPD or FDNY are but one-act plays; circumscribed incidents unfolding in front of a small number of bystanders, observers and witnesses and an even smaller number of actors.  We can be forgiven our rapid dismissal of what may be unfolding; our City is too crowded, our pace too fast, our lives too hurried to ponder that occurring out of sight.  It quickly becomes an item out of mind.


The NYPD and FDNY have very well defined missions.  Each is the  hands down, indisputable premier Department of its kind in the USA; the Police Department that other cities can only hope to emulate and the Fire Department that over the last 150 years has literally written the books on urban firefighting; all the methods, tactics, strategy, and ancillary duties of fire science as applied to our unique urban topography.  Emergency Medical Services were once an unwieldy hodgepodge of ambulance services provided by municipal and private hospitals under the purview of the HHS.  In 1996 all such services were disbanded and the EMS Division of the FDNY was officially formed. In retrospect It was, one of the best decisions to have come out of City Hall in many years.  To call it a success would be an understatement.


Too often it seems our EMS and EMTs receive less public attention than FDNY and NYPD.  In reality they are as close to more often being “first responders” to a 911 call.  They wade into bloody, messy scenes of brutality and carnage, murder and mayhem often ahead of Cops and Firemen. They charge into active crime scenes out of reflex; they are aggressive in their approach to aiding the suffering. These men and women MOS are highly trained in all manner of life saving, injury treatment, emergency medical procedures and practices; they are our urban medics who often know little of the scenario they are about to walk in to.  Their bravery is second to none, their ability to function competently, professionally, and coolly amid the chaos of crisis, the shear noise in small apartments and narrow corridors, on dark streets and darker alleys where violence had just visited is remarkable.  In fact, they are so good collectively that we take them for granted; so exceptional individually that we rely on them without question or doubt.


And now the proud ranks of the EMS and FDNY will bury one of their own.  Her sons will bury their Mom, friends, neighbors, and many others will continue to mourn her shocking passing while remembering her glowing life.  The Bible teaches that there is “no greater love” expressed than when one gives one’s own life for another.  Yadira Arroyo did just that.  She is now in the warm light and embrace of the Lord, Safely Home… 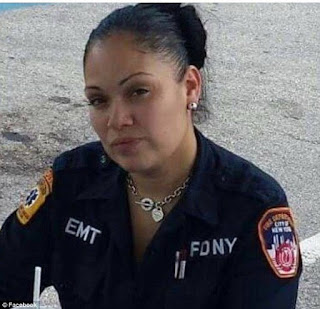 Posted by Brooding Cynyc at 9:58 PM No comments: