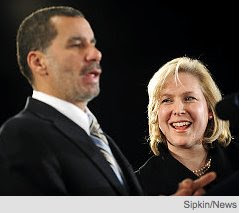 GOVERNOR PATERSON WITH KIRSTEN GILLIBRAND
WHAT DID HE SEE IN HER?
(Photo courtesy of NY Daily News)


(Jan. 26, Albany, New York) The bumbling, stumbling, buffoonish Governor of New York, David “Blinky” Paterson has once again done the inexplicable. After a four week drama involving insiders, outsiders and politicos of all types in the cesspool of Albany and beyond, Blinky named an obscure, dimwitted, largely unknown, upstate Congresswomen, Kirsten Gillibrand. His choice was not only dumbfounding given the field from which he had to chose but also for the process by which he conducted the entire affair.

Paterson became the ‘accidental Governor” last year after then governor, Elliot Spitzer was forced to resign once his dalliances with a prostitute came to light. As Lieutenant Governor Paterson moved up to the highest notch in the State Government despite his own extramarital roamings and admission of drug use.

When the junior Senate seat vacated by Hillary Clinton’s bizarre appointment as Secretary of State by then President-elect Obama, a veritable political and media circus tent blossomed over Albany. Early in the process Carolyn Kennedy-Schlossberg’s name was tossed into the ring of viable candidates. The daughter of JFK, a widely respected New Yorker, philanthropist and the last living member of “Camelot”, Kennedy was instantly seen as the front-runner, if not shoe-in for the seat. Other NY politicians considered or interested in the job included Andrew Cuomo, a former Bill Clinton Cabinet member.

Paterson found himself facing a level of prominence and scrutiny in the national media due to the alleged criminal and corrupt manner Illinois Governor Rod Blagojovich attempted to fill the Senate seat vacated by Barak Obama. The New York Senate seat has a long and storied history and, in recent times has been home to carpetbaggers with higher political ambitions. Carolyn’s uncle, Bobby Kennedy and Hillary Clinton are the two most well know carpetbaggers who intentional sought this seat to use as a political springboard.


For her part Gillibrand has represented the 20th Congressional District that includes Albany and its vast surrounding, largely rural areas, seems to be an ideologic and legislative hybrid. She is s staunch advocate for “hunters rights”, and a 100% approval rating from the NRA. According to the New York Times:

“In Washington, the new Democratic majority handed her two plum committee assignments, Agriculture and Armed Services, and she has a political portfolio not easily charted along a left-right axis. She earned a 100 percent approval rating from the National Rifle Association while also being showered with love and dollars by women’s groups like Emily’s List; she favors the English language-only movement as well as abortion rights; she voted in July 2007 to withdraw troops from Iraq and, this fall, against the Wall Street bailout bill.”

Since her election to Congress in 2006, she appears to have been in perpetual campaign mode, appearing across her District exuding a “folksy”, “down to earth” persona which has helped her raise $4.6 million during that time for her campaign war chest. One of the old time Albany insiders who has watched Gillibrand’s political career closely, speaking anonymously said, “She is clearly ambitious. Friends have long talked about her political eyes being trained way beyond Albany. She is a good, effective campaigner but does have a nasty, vindictive streak in her. Some colleagues have called her a “bitch”, a “witch” and a “cold-hearted frump.” These are among the most complimentary terms I have heard to describe her.”

Perhaps the true reason or reasons Paterson decided to place her in the US Senate will become publicly known. For now, his rationale is not apparent or decipherable. Blinky’s spokesperson, Maritza Colon-McGee told reporters that , “ The Governor put a great deal of thought into the appointment of Congresswomen Gillibrand. As he always does, he looked at the big picture, recognized the importance of his actions in this matter. He saw something in her that the rest of us have yet to see but, let’s give her time.”


Copyright TBC 2009 © All Rights Reserved
Posted by Brooding Cynyc at 7:00 AM