GOP ELECTS MICHAEL STEELE AS PARTY CHAIRMAN
Will he prove to be a real steal? 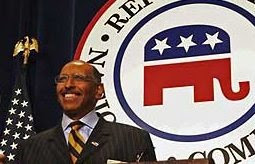 Watch out Mike. That elephant over your shoulder
might shit all over you.


(Jan. 30, Chevy Chase, Maryland) The former Lt. Governor of Maryland, Michael Steele, was elected as the Republican Party (GOP) Chairman earlier today at the Party’s Winter Meeting in downtown Washington, DC. It took five ballots until Steele emerged the victor in a 91 - 77 vote. Obviously, he will be the first African American to ever serve in this capacity but, the five ballot slog does not bode well for ole Mikey

Steele has had a somewhat dubious political career having lost in his bid to be Maryland State Controller as well as being soundly defeated in 2006 for his bid for his state’s open US Senate seat. He did serve relatively effectively as Lieutenant Governor from 2003 to 2007. He then became Chairman of the Republican Party Political Action Committee (GOPAC) in 2007. Throughout his public career Mr. Steele has been the “first African American” in several of the positions he has held or been elected to. He has played this card to the hilt whenever the opportunity arose.

By most accounts Steele is a decent man and has served the public well. Giving the GOP the benefit of the doubt, (which is an exercise in futility), Steele’s ascension to the National Chairmanship of his Party may signal a real sign of change in what has become the party of white, southern, conservative, ugly, hideous, rotten people. But, that is most certainly not the case.

Steele’s competition in this intra-party fistfight, were a cast of characters that collectively could be defined as one of the most bigoted, biased, brain-dead, arrogant, moronic and narrow-minded group of candidates ever assembled by the GOP for such an election. However, if not for the fact that the Republican Party had their asses whupped last November, one of those wing nuts would now be Republican Party Chairman. Steele was a godsend to the sons of the Confederacy who have become the keepers of the GOP flame. A Black politico who had won statewide election in Democratic Maryland - of all places!?! - a savvy mover and shaker within the Party politics also well versed in the complex waltz steps required of anyone hoping to succeed in party politics or Washington DC, for that matter.

In some ways it is amazing that Steele would allow himself to be played this way. Surely he must, on some level, realize that his election to such a position of prominence was made possible only by Barak Obama’s election as President. So blatantly crass in their apparent motives, the GOP just HAD to have their own ‘black guy’ to prove they are a ‘party of inclusion.’ Steele has been elected as a counterweight, maybe a counterpunch to Obama. What a load of unadulterated bullshit that is! But, no one has ever accused the Republicans of lacking in balls, nerve or clumsy political tactics. Yes, the Party of Lee Atwater and Karl Rove remains intact if not a little rudderless in the wake of their trouncing on November 4, 2008. Much has been made about their current “identity crisis”, their search for a “new message” and other such crapola. They have one identity and will continue to have one identity; they are a group of vicious, petulant, corrupt, white trash. They gave one of their own, the boy-idiot, George W. Bush, whatever he hollered for over the last 8 years and have found themselves on the loosing side of virtually every issue of the past decade. Yet, with blind arrogance, extraordinary ignorance and a sufficient number of NASCAR watching, mouth breathing gomps to vote for them, they will march on to the tune of Rush Limbaugh, defying the public good for selfish political reasons. Yup, that’s our GOP, ladies and gents. The ‘Loyal Opposition’? not really.

These are men and women who are loyal only to their own greed and to their political contributors. They are loyal to themselves and will fight bitterly ; as dirty as junkyard dogs to retain their positions of power. Their own constituencies are to dumb to see through them but, those who rise to power within the Party allow the rest of America to see what filth they really are.

So now, they have big black Mike Steele as their public face. Wow. The irony in this is astounding. Steele now finds himself the front man for a group that has long detested everything he has stood for and embodies. Affirmative Action? Urban investment and development? Public health reform? You name it, Mike, and they have aggressively opposed it. But, you wanted the job and now, you’ve got it. Perhaps you don’t mind being used or you are actually naive’ enough to think that you were elected for your principals and convictions, on your resume and experience. Hey, did you get a good look at the four ballots before the one that thrust you to victory? Did those guys look like they represented change? How ‘bout the one who mailed DVDs of “Barak the Magic Negro” during his crafty campaign to occupy the post you now hold? It’ll be so much FUN working with these vultures, won’t it Mike?

With all due respect Mr. Steele, let’s hope that you are empowered and able to enact some significant, palpable change in your party. Americans of all persuasions would welcome that. Perhaps you can be the catalyst for change in the Party that has greased the skids as our reputation, security, economy and Constitution has flown into the abyss.

Best of luck, Mike. Just watch your back. Always. You may also have to learn to not only bite, but to also swallow your tongue and your pride right along with it.

Hey Mike. Hope you don’t mind taking orders from
this ferret faced shit stain in the underpants of the Senate,
Mitch “Bitch” McConnell,
The Pride of Kentucky.