THERE’S SOMETHING NOT KOSHER IN IOWA

TROUBLES IN THE WEST BANK ON THE PRAIRIE 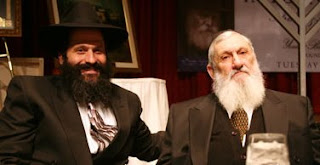 THE VILLAINS OF POSTVILLE
CEO Sholom Rubashkin and his imprisoned father, Aaron Rubashkin.


(Jan. 27, Postville, IA) They came here in 1987, Hasidic Jews of the Lubavitch movement from New York purchasing a non-Kosher slaughterhouse. They quickly refurbished it according to Hasidic Law naming the facility Agriprocessors. Certainly there sudden appearance in this rural community tucked in the northeast corner of the State raised eyebrows and soon tempers. The Jewish influx continued unabated tearing apart the long time solid Catholic- Presbyterian-Protestant-Lutheran community. The Jews bought homes, real estate and imposed themselves among the innocents of Postville just as they have the Palestinians in the West Bank and Gaza.

On their way to becoming the largest provider of kosher meats in the United States, they utilized barbaric, illegal and criminal employment tactics including hundreds of blatant violations of child labor laws. As the blood flowed on the wretched abattoir floor of the plant, the lives of Mexicans and Ukrainians, Guatemalans and Serbians were destroyed and washed away among the entrails. If these Hasidic had come here to fulfill every cliché, stereotype and maligned Jewish trait, they were stunningly successful. That success was matched only by the success of their business. The population of tiny Postville, (approximately 2,300 residents in the 2000 census) was growing by leaps and bounds as more makeshift impromptu immigrant trailer parks and ragtag communities appeared in fields that once knew only the presence of corn and soybeans.

Agriprocessors finally had the first taste of American justice in May 2008 when federal, state and local authorities conducted one of the largest immigration raids in history. They documented hundreds of illegal immigrants who worked alongside their minor children in the fiercely dangerous environs of the cavernous, fetid slaughterhouse. Authorities, even veteran officers where dismayed, even deeply troubled by the extent of the cruelty that the Jewish ownership and management treated these poor, uneducated but, oh so willing to work immigrants.

This first raid and the vast array of charges that hit the Rubashkin family and the subsequent details of just how horrid it was to work for them were revealed, their Kosher Kingdom in the Heartland began to crumble. Today, they were hit with a second massive blow that hopefully will end in prosecutions; destroy and imprison the goyem who ran this foul machinery of animal and human carnage. 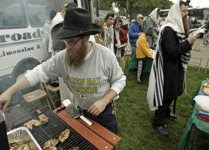 The Rhinestone Rabbi grilling up some Kosher veal
in Postville during happier times; before the law
caught up with the evil criminals exploiting the poorest
of the poor as they profited wildly.

Postville had remained largely untouched since its founding by German and Norwegian immigrants in the 1800’s until the noisy, rude intrusion by the Hasidic Jews. “Well, at first, we didn't’ know what to make of them”, commented Orville Heidemann a life long resident and farmer in Postville. “real soon though we saw what their plans were, what they were doin’ and hows they was doin’ it. We knew then that they was very bad and dangerous people”, added Heidemann.

Gunther Miller, spokesman for U.S.. District Court Judge Linda Reade (who set bail for Aaron Rubashkin at $500,000 earlier tonight), stated, “Since law enforcement in Iowa is so inept, backwards and lazy, it took intervention by the federal government to expose the cruelty and horror that was going on 24-7 in Agriprocessors. Had ICE and other federal law and labor enforcement agencies been aware sooner, well, they could have saved lives.” The former CEO and owner Aaron Rubashkin had been held without bail since November 2008.

Of course the Rubashkin’s and Agriprocessors have no lack of apologists and defenders from Brooklyn to Tel Aviv. “It is amazing to me just how arrogant, nasty, belligerent and vile these people, these supposedly “religious” men, really are. Now I can easily understand why they are so hated and have been for so long”, said Eric Schultz, an unofficial spokesmen for Iowa Governor Chester Culver.

The federal authorities are currently at work assembling the hundreds of criminal charges into federal indictments which will fall on the heads of the Rubashkins in the coming months. Many of the illegal immigrants who were caught up in the initial round of raids have been relocated. Many have received help from faith-based and charitable organizations such as the Red Cross, Salvation Army and the St. Vitus Foundation. Sr. Filomena Marie who organized a St. Vitus Dance last month to raise money for the former Agriprocessors “employees” said, “I pray nightly for the young children who were forced to stand up to their necks in blood and guts for 16 hours at a time using power saws and power washers. Hopefully God will permit them to forget the horrors they’ve seen. I also pray every night that the vicious Jews who exploited these children and their parents will burn in the eternal flames of non-kosher hell.”

Postville: A Clash of Cultures in Heartland America (ISBN 0-15-100652-0), written by Stephen Bloom, a professor at the University of Iowa.