WHAT’S THE MATTER WITH CORNEL WEST?


AND WHY IS HE SO ANTI-OBAMA? 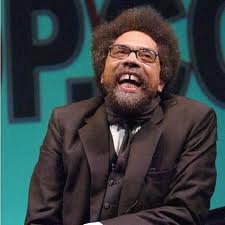 (Saturday February 16, 2013.  Princeton, NJ) Outside the insular confines of academia’s ivory towers and the even smaller elite cadre of “African- American Studies” professors, self-described Black activists, intellectuals, and fans of the Tavis Smiley radio program, the overwhelming majority of Americans are unacquainted with Cornel West and well they should be.  Currently Dr. West is a professor at Princeton University, a rather prolific author of semi-original works dealing with race, gender, and class in America and in particular voices, in his arrogant, racially skewed, opinion, his belief that the United States is a "racist patriarchal" nation where white supremacy continues to define everyday life.

West is a member of that slender slice of African-American, affirmative action benefiting pseudo-philosophers more rabblerouser than thinker; more charlatan than legitimate scholarly author, more radical activist than dedicated advocate for any cause.  His main cause apparently is to advance his own skewed perspectives on racial and societal matters while enriching himself by hawking his books and charging exorbitantly high speaking fees to “preach” his message and “educate young brothers and sisters” about the “true nature” of our culture as he myopically views it from his lofty perch.

One might assume that a man who proclaims to be an advocate for racial equality and especially dedicated to the plight of Black America, Cornel West would be a strong supporter of this country’s first African-American president but you would be mistaken.  West has never been a true backer of President Obama and in print and in speech he derisively refers to our president as “Brother Barack”.  It seems that West has a litany of complaints about Barack Obama and his latest accusations reveal just how deep his animosity for Obama is.

Prior to the second Inauguration of President Obama Dr. West assailed him for planning to use Martin Luther King Jr.’s Bible to swear the oath of office.  West contended that Obama didn’t “deserve to use” Dr. King’s Bible because Obama’s experience as a Black man in America was uniquely different from that of the rest of Black American men.  This is an odd allegation considering the fact that Cornel west has about as much in common with the rest of Black American men as he does with white Jewish women on Long Island.  West is a product of the affirmative action programs that provided him entry into Harvard for his undergraduate degree and ultimately onto the faculty at that prestigious Ivy league school.

West is on the faculty here at Princeton University since his dismissal from Harvard in 2002 for his “sub-par performance, failure to conduct any original research or produce peer reviewed writing”, all of which are essentials for faculty members at such a university.  Then Harvard president, Larry Summers, dismissed Dr. West also citing the fact that West spend an inappropriate amount of time away from his duties at Harvard to promote and enrich himself by hawking his books and collecting large speaking fees.

Earlier this week West made the news with his wild accusations that President Obama should be tried as a “war criminal” because of the number of deaths related to drone strikes in countries the Administration has targeted known terrorists and their encampments.   The United States military goes through great lengths to avoid injuring or killing innocent people.  “Collateral damage” is the undignified euphemism to describe such unintentional deaths and each one is a tragedy.    Professor West may serve his students and followers better if he were to focus on the reasons President Obama in his role as Commander-in-Chief approves of the tactical and strategic utilization of the unmanned aircraft called drones.  Instead, the rabble-rousing, flame throwing “intellectual” has chosen the lowest common denominator in a very complex equation to attack the President, an African-American man who does not seem to meet the strict criteria of what he considers an African-American man imposed by Professor West. Even the most cursory review of West’s writings, lectures and speeches show that “Blackness” is a favorite topic for the esteemed Professor.

While Dr. West and his opinions occupy a far outpost of legitimacy, he is not totally alone on the fringe.  There are other Ivy League schooled and employed African-American “intellectuals”, “activists”, and “thinkers”, who have made their reputations and careers by being “professional Black” provocateurs.  Characters like Michael Eric Dyson and Henry Louis Gates have at one time or another headed a university “Black Studies” department or, using the more recent politically correct vernacular, “African-American Studies” programs.  These were positions created to fulfill the mandates of affirmative action as well as by a strain of academic liberals with some oddly acquired sense of “White Guilt”.  That slavery is an indelible stain on the soul of this great nation is undeniable; that 400 years of slavery in America created a legacy that contributes to this day to some of the very real, serious dysfunctions in the African-American community writ large from coast to coast.  Despite profound endemic problems in “Black America” all the African-American Studies professors in the country have done nothing of substance to enact change, to bring their high powered intellects and influence into the communities that suffer most.  No, they spend their careers in the scholarly assembly of lists of all the problems, all the ills, all the injustice, poverty, despair, violence, unemployment, under-education, and helplessness in those communities.  Perhaps they are unable to offer suggestions and recommendations and actually work towards improving the lot of their “brothers and sisters” but they are so far removed physically, mentally, geographically, financially and in every other way from their beleaguered “community” that they would not know where to start.

President Obama has done more to elevate the spirits if not the prospects of a generation of African-Americans simply by having been twice elected to the highest office in the land than Dr. West has or will ever accomplish.  The ascendancy of Barack Obama is precisely what makes West fume.  After all he and his ilk have made their careers exploiting the conditions and circumstances in the African-American population and much of the wind has been blocked from his sails with an African-American in the White House, twice elected by significant if not impressive majorities.  Black America alone did not place Obama in the White House, a broad coalition across all demographics did.

If anyone should be held accountable for “war crimes” it should be Dick Cheney and his imbecile side kick George W. Bush.  It is their legacy of an ill-conceived military doctrine of preemptive war and the host of extra-constitutional policies and tactics that should be investigated; the current President inherited that host of toxic weeds overgrowing our historic military philosophy.  But that is beside the point here; Dr. West and his ignorant, hostile rhetoric and thinking is the point.

The election of Barack Obama did not automatically eradicate the problems in Black America; it did not bring them more jobs, better schools, health care, or housing.  It did however bring Black America and all Americans the very real positive message that anything is possible.  In a nation as young and dynamic as ours, despite the anger, rancor and bitter partisanship that has come to define the political process and holds the legislative process hostage, our first Black President represents truths far beyond the details of his own unique journey.  One might think that African-American intellectuals, activists, professors, and philosophers all across America would celebrate his presidency but, if they listen to Dr. West they would be sadly mistaken and that, in and of itself is sad.  Dr. West should be ashamed of himself but men like him lack the capability to be shamed.

Cornel West is an arrogant asshole. If he is so concerned about his people why doesn' he live in Camden of Newark and invest some of his precious time and money on the residents who live their. Maybe because they don't read his books. They are too busy trying to survive. A real man of the people.