HE SAID, SHE SAID


YES, THEY REALLY WERE ELECTED 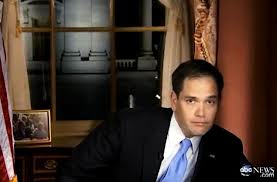 Senator Marco Rubio and Congresswoman Nancy Pelosi: And we
wonder why nothing gets accomplished in Washington DC?

(Wednesday February 13, 2013.  Washington, DC)  After President Barack Obama delivered his annual State of the Union Address before a joint session of Congress and millions of American television viewer, both the Democratic and Republican Party’s were able to put before the American public prime examples of their respective Party’s gross incompetence and sub-par intellects.  In what has become a tradition a specially selected member of the opposition Party, the Party not holding the White House, is given the opportunity to telecast their “response” to the President’s address.  Since the Democratic president has been in Office now for five years, the Republicans have had five chances to showcase one of their “best and brightest”, one of their internally designated “rising stars”.  In the last four years we have had to painfully watch as the Republican designated to perform this politically important task have not been able to make the grade.  Actually, the last four Republicans each bombed in their own unique moronic ways and clearly Florida Republican Senator, Marco Rubio, honored that expanding tradition.  The young freshman Senator likely removed himself from the ranks of his Party’s up and comers by being down and out before a large national audience.

The GOP chose the boyish looking Senator for obvious and crass political reasons.  Having lost the last election by huge margins in the Latino and African-American segments of the populace the telegenic Cuban American has the superficial cosmetic appeal his Party feels they need to reach voters not inclined to vote Republican.  This could have worked to their advantage in a very small way but instead it backfired miserably as Rubio delivered an incoherent, convoluted, contradictory speech in a clumsy, fumbling manner.  Even if one had watched Rubio with the sound turned off it was painfully obvious he was so ill-suited to the moment and task that he resembled a little boy wearing his daddy’s business cloths as a costume.

If one had been listening to the speech itself it was delivered in short bursts of sentences that he seemed unable to read properly from the Teleprompter; either he does not read aloud very well or the speech was presented to him without punctuation.  He was in obvious distress as his audible inhalations and exhalations sounded alternatively like a vacuum cleaner being rapidly switched on and off.  He demonstrated an odd nervous tic occasionally swiping at his temples perhaps as a way to staunch the perspiration flow or perhaps not.  It was difficult to determine.

Much is being made about Rubio’s mid-speech awkward stretch for a small bottle of drinking water to add some much needed moisture to his dry mouth but that was not really that big of a deal.  By that time he had already amply shown the American public that he is just another empty suit; another idiot politico uninterested in the nuts and bolts of legislating but rather in Washington DC to pursue his own self-serving ambitions.  Yes, Marco had a featured role at the Republican National Convention last year in Tampa.  He delivered to that moribund crowd a speech that was essentially nothing more than an autobiography of the life of Rubio up to that point.  But, he is young, good looking and Latino, three big assets in the eyes of the powers that be in the GOP.  Had they kept him under wraps for a few more years, at least until he matured a bit, gained some experience, and became more polished as a politician he may have been a viable candidate in 2020.  Instead they have used him to put a different public face before the voters who perceive the republicans as the Party of old, rich white, conservative men.  Based on his abysmal performance last night they seriously miscalculated their hand.

So desperate are the Republicans to find an identity that will have a broader appeal beyond their traditional base that they will use anyone as a dupe.  In his naivety Rubio likely thought his selection to make the GOP response was an honor bestowed to him because of his political viability as a candidate who could attract a more diverse segment of the voting population , i,e,: African-Americans & Latinos,  to support Republican candidates and causes.  How sadly mistaken he was.  Perhaps if he had come across as an intellectual with feasible ideas and a willingness to compromise with the President and the Democrats on some of the most serious issues of the day, those issues that resonant most strongly with the vast majority of Americans, he may have furthered his and his Party’s caused.  Instead he embarrassed himself.  After giving the American people such a rotten first impression it may be difficult for the ambitious youngster to recover.

From the other side of the aisle the viewing public who stayed tuned after the President’s address had concluded were treated to an interview starring the House Minority Leader, the addled California Democrat Nancy Pelosi.  On the cable network MSNBC old Nancy was interviewed by on air personality Ed Schultz.  Ed lobbed soft ball questions at the aging Congresswomen and had to suffer through her disjointed, nonsensical replies.  Nancy is either unable to speak as the result of the 20 or 30 facelifts she’s had or her Botox and red Bull addictions have left her permanently impaired.  She seemed to not be aware of her surroundings and glanced at loud mouthed Ed like he was a leper.

Pelosi is at the other end of the spectrum from Rubio.  A long time Congresswoman from a very secure California district she has been in the House since Rubio was basically still in diapers.  She is the consummate political hack from a family of political operators.  She was the first female Speaker of the House before the GOP regained control of that useless corrupt body and installed the vapid orange tinted man, John Boehner for Ohio.  He’s been even less effective as Speaker than was the geriatric Pelosi. Pelosi is usually so befuddled that she no longer even makes an effort to appear as if she understands questions being asked of her.  She answers virtually every question with a rictus of a smile and some boilerplate blather that makes sense ot no one aside from her.

Perhaps Ms. Pelosi had a solid excuse for her incoherence, confusion, and florid dementia; she is, after all well over 70 years old and partially mummified.  It was difficult to determine if the old gal had intentionally applied her own lipstick or if a drunk had been hired to accomplish that task.  In any case she looked like a cross between Mommy Dearest and a wrinkled crack whore.  Her performance was a strong argument for term limits as well as some basic competency testing for all members of Congress who’ve held office for more than 10 years.  Thankfully MSNBC kept her air time limited and spent the balance of their post-address broadcast allowing the blithering, spitting, buffoon Chris Matthews spout out his usual voluminous partisan tripe.

After watching Rubio and Pelosi it is easy to see why the Congress has its lowest approval level in history and why they are unable to accomplish anything of substance or value for the American people.  These people and their colleagues have no agenda other than their own.  Incumbency afforded them a host of benefits that make the prospect of a rival unseating them come election time a very difficult prospect.  Such job security breeds complacency, arrogance, and effectively disconnects them from the very real pressing needs of their constituents.  Committee assignment often vault obscure back benchers into positions of Chairmanships that they have no right having.  They rely on their bloated staffs to do all the research into every issue and the Congress members themselves serve as pre-programmed mouthpieces reminiscent of the greatest mouthpiece of modern politics, the Alzheimic Ronald Reagan.

THERE WAS A TIME

There was a time not very long ago in our history when the Senate and House were occupied by men (primarily) who were politicians, yes, but functioned in their roles ever cognizant of the responsibilities that came with the office. They not only felt obligated to serving their country and constituents but were more than willing to put partisan differences aside and work together in common purpose for the great good.  That era of Congressmen were of such a higher quality than the self-serving, money hungry, power obsessed, imbeciles that walk the corridors of the Capitol today.  Perhaps our elected officials are but a reflection of the electors, of the voting public.  As our national character has changed so dramatically in the last 30 or 40 years and our society and culture have learched through these very same changes,  so too has the quality of those we elect.  They collectively lack the integrity and intelligence, the shared sense of responsibility and purpose, and for doing the duties that would fulfill their oath of office.  There are no grand thinkers like Fulbright, Dirkson, and Moynihan.  There are no expects in special fields sitting on committees that deal with what they no best like Sam Nunn, Richard Lugar, Les Aspin, and Gerald Ford.  No, there are no statesmen or individuals of character and dedication.

All we have today are corrupt hacks, flacks, and men and women bought and paid for by the entire array of lobbyists, special interest groups, big corporations, political action committees (PAC) and any other organization or individual who can financially help them stay in office.  The members of both chambers of Congress are there to be reelected again and again.  That is their only purpose and that is why we have the ilk of people we do occupying The Capitol.

Posted by Brooding Cynyc at 3:01 PM