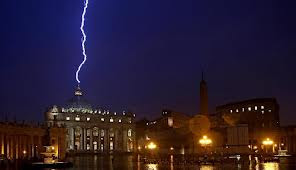 (Tuesday, February 12, 2013.  Vatican City, Rome, Italy)  For the first time in six centuries a reigning Pope will resign from that exalted position as the leader of the one billion members of the Roman Catholic Church.  Pope Benedict XVI announced his plan to resign in Latin here yesterday while speaking at a routine meeting of cardinals.  In his brief unemotional statement he informed the cardinals that his resignation would be effective on February 28 of this year. The 85 year old Pontiff cited health issues as his reason for abdicating his seat as “the direct descendant of St. Peter”.  While the Pope does have a cardiac pacemaker implanted in his chest he has maintained a relatively public life and travel schedule although he has, at times shown signs of fatigue.  Vatican officials reacted with surprise although there has been some indication that Benedict XVI may have made his decision as long as a year ago.  Upon his resignation a meeting of the College of Cardinals will convene to select a successor.

In a Church that historically has held its secrets close and its cherished rituals virtually unchanged throughout the ages, the process of selecting a new Pope is the most highly guarded secretive and private Vatican function.  Steeped in tradition and shrouded in mystery the machinations of the College of Cardinals have never been fully revealed. In keeping with the centuries old tradition, once a new Pope is selected white smoke is released from a fireplace in the Vatican signaling the end of the process.

To many Catholics and non-Catholics the heavy cloak of ceremony, rites and rituals is an arcane, antiquated weight on the Church that has been rocked by sordid scandals over the last two decades.  Aside from the scandals many Catholics feel that the Church has simply not “kept up with the times” and has lost relevance in their lives.  The Catholic Church has long been on the “wrong” side of many social and cultural issues and seems to see no reasons to change.  American Catholics in particular have drifted away or simply left the Church in large numbers since The Vatican II Council of 1966.  Much of what came out of Vatican II was intended to “modernize” the Church or at least make it less restrictive on certain matters such as fasting before receiving the Sacrament of Holy Communion and conducting Mass in English as opposed to Latin.

The Roman Catholic Church has made minor changes that amount to little more than cosmetics; the bedrock tenets and teachings of the Catholic Catechism remains unyielding over the issues that matter most to American Catholics such as the matter of priests maintaining the Vow of Celibacy and the ban on women priests.  The Vow of Celibacy has been most under fire in light of the revelations of widespread sexual abuse by priests on young boys.  Thousands of sexual abuse victims, now adults, have come forward in recent years, formed support groups and sought legal recourse through the Courts.  The Church has made huge financial settlements to some of the victims; these settlements have left many parishes and dioceses bankrupt.  These scandals have taken on an even more sinister aspect as it has come to light that many senior priests and parish leaders, high ranking Monsignors, Bishops and Cardinals were aware that clergy members under their domain had repeatedly over the course of many years sexually abused children.  These Monsignors, Bishops and Cardinals often covered up for and went as far as actively protecting some predator priests.

A CROSS TO BEAR

Being a Catholic, an actually full time practicing Catholic has never been easy.  After all, for centuries Catholicism was considered an unholy unwanted cult forcing the early followers to worship in secret.  It took many years and much blood before Catholicism could come out of the shadows and catacombs of Europe and flourish in the light of day.  But as interesting as that dark era was for Catholics it is ancient history.  It has been centuries since Catholics were persecuted and fed to Roman lions yet even here in the United States Catholicism remained poorly understood and not “acceptable” well into the 20th century.  With the election of the first Catholic president of the United States, John F. Kennedy in 1960, Catholicism began to gain wider understanding and acceptance.  It certainly was a strong and growing denomination up until that point.  Kennedy addressed his religion in a speech while campaigning for office in which he clearly stated that he would not be “beholden” to the Pope or his own personal religious beliefs.  It seems that the concept of the Pope has always been a troubling component of the RC Church.  No other denomination, sect or congregation has a similarly singular “Holy Authority” or a counterpart to the Roman Catholic Pope.  Many non-Catholics and arguably a near majority of self-described Catholics find the office of Pope to be a Byzantine remnant that has no place in modern times.  There is also no other religion that has a parcel of land that has “near country sovereignty” as does the RC Church and The Vatican.  They even have a non-voting seat at the United Nations General Assembly; they certainly have come a long, long way since their days of accused heathens and blasphemers.

It still remains challenging to be a practicing Catholic.  No one is being flogged or fed to wild animals but there exists a level of commitment, discipline, sacrifice, and unquestioning adherence to the tenets and teachings of the Church that many find too onerous to abide by.

Many who grew up in the Roman Catholic Church or who have congenital Catholicism feel estranged from the Church of their youth.  Some have had traumatic experiences in Confession or counseling with old-time hard core priests refusing to grant Absolution for certain “sins”.  There are countless tales of Catholics being “excommunicated” by some priest in the dark confines of the old Confessionals.  The Church still teaches that divorce is a sin, pre and extra marital sex are sins, the use of birth control (aside from the “Rhythm Method”) is sinful as are abortion, adultery, and an impressive list of other behaviors, behaviors that other religious denominations do not ostracize their members for.

As American Catholics became increasingly restive with the Church they were raised in, the phenomenon of “Cafeteria Catholics’ emerged in the late 1980’s.  These are Catholics who pick and choose what doctrine they will and will not adhere to making their choices cafeteria style.  Some attend Mass and receive the Sacrament of Communion despite being sexual active, divorced, or not fully observant of all the Catholic Church expects of her flock.  Most members of the RC clergy and certainly the hierarchy all the way to The Vatican do not accept such cafeteria style worshippers as true Catholics.  This has kept ever more Catholics away from their Church and been a real hindrance to the American flock growing.

The largest growth of Catholics is taking place primarily in Third World countries.  In Central and South America, The Philippines and some African nations Catholicism is on the rise despite the hardships that come along with it.  In these very same countries prenatal and postnatal care is often nonexistent, infant mortality rates are alarmingly high yet the RC Church’s absolute ban on birth control prohibits millions of women from exercising control over their bodies and the destiny of their families.  Every time the World Health Organization (WHO) seeks to fund family planning initiatives in these emerging Catholic countries, The Vatican adamantly opposes their efforts and threatens to sever funding of other services to help meet the needs of those people.  It is this level of hypocrisy that has driven so many American Catholics out of the Church of their faith.  It is difficult to justify the Vatican’s dictates and reality.

To say the Roman Catholic Church is at a crossroads is to set a new standard for understatement.  The Church has been so damaged by the sex scandals, the cover ups, and its failure to give any ground and adopt a more progressive dogma that it is shrinking fast in America.  There are fewer parochial schools because so many dioceses have been bankrupted by the enormous – and just – financial settlements made to the surviving victims of predatory priests.  The priesthood itself is severely diminished as a vocation and the shortage of priests, brothers and nuns reflects the church’s loss of stature and arguably relevance in the eyes of so many who would like to call themselves Catholics but in good conscience they cannot.

Now with the resignation of Benedict XVI looming large on the horizon once again the argument about the role of The Pope is seeing renewed life.  The Papacy as it has stood for the last thousand years is ostensibly unchanged.  There is a strong current of thought among some catholic theologians and secular scholars that the Office of the Pope has outlived its utility and supposed divinity.  This is of course open to debate as well it should be.  Unfortunately the Catholic Church is not receptive to debate and it will not tolerate a debate of such profound significance.

No doubt there will be a new Pope appointed probably by Easter Sunday and it is not reasonable to think that the new pope will be any different from the last one or any of the other 220 plus predecessors.  That is a sad statement and a sad state of affairs from an institution that once had a real place in the lives of American Catholics.