RNC MIGHT EXERCISE “CHOICE”
McCain Looks To Run The Ship 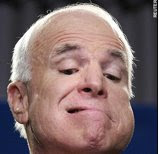 Michael Steele with his only friend,
while John McCain chokes on sour grapes.


(March 11, Washington, DC) Until the bizarre events of the last few weeks, all the talk about the demise of the “rudderless” Republican Party and their “identity crisis” seemed like just so much inside the beltway chatter. Now, it all seems right on the money. Their troubles may have only begun with the trouncing they took in November 2008 given the absurdity of what has transpired since. Witnessing the GOP devolve into ‘The Gang That Couldn’t Shoot Straight’, has been one of the most enjoyable sideshows in the history of modern American politics. It promises to only get better.

Since the inauguration of President Obama, the Republicans have shown the entire country their true colors. The rabid vermin representing the GOP in all their glory are as unappealing to view as they are to hear. Spewing the tattered and torn, bogus rhetoric of yesteryear, fools like Mitch “Little Bitch” McConnell, Eric Cantor, John “Tanning Bed” Boehner and, lest we forget, obese, pill popping hero of conservative radio and all things Republican, Rush Limbaugh, are a vivid example of what the GOP stands for. They loudly and proudly hope that President Obama fails, and are so much more concerned with small “P” politics rather than governing that it is nauseating. As sickening as these corrupt imbeciles are, it is important that they are seen and heard - often. As they obstruct the new Administration’s initiatives, sit on their hands as the country teeters on the verge of a depression, they collectively choose to throw mud and plot future campaigns while huddled beneath the frayed and flimsy banner of their Alzhiemic deceased hero Ronald Reagan. Yup, this is great, boys. Show the entire country what and who you really are, not just your “base.”

The CPAC convention two weeks ago was a one-of-a-kind display of the GOP at their very best , celebrating the very best they have to offer. Gomps like Joe the Plumber, El Rushbo, Newt Gingerich and a host of equally repulsive has-beens, never-weres, retreads, and burnt out neo-cons, delivered some real “red meat” for their “base”. Being base for the “base” may keep them wandering around off the governing bases for a good long time to come. After eight years of the most disastrous Presidency in the history of our Nation while the GOP ruled both Houses for 6 of those 8 years, finally, the currents of some cosmic retribution are swirling through the streets of Washington as well as the Halls of Power in the Capitol.

The missteps, miscues and blatant mistakes grow in number virtually every day. First, the Republicans have the gall to attempt to rewrite the history of last 8 years and lay blame for the economic implosion on the Democrats and Obama. Then, of course, there was Senator Judd Gregg and his brief moment in the sun when asked to be nominated as Commerce Secretary, that inspiring drivel from Louisiana Governor Bobby Jindel after the President’s Address to the Joint Chambers of Congress and, perhaps the greatest gift that keeps on giving, the newly elected chairman of the RNC, Michael “Boggie Down” Steele. It really can’t get much better than this or, can it?

While the addled sore looser John McCain slaps his hand angrily on non existent tables in the Senate Chamber, his Party’s de facto leader, Steele, has been alternately bickering and apologizing to and with that massive tub of shit, Limbaugh. yes, indeed. A low browed, knuckle dragging talk radio host has laid claim to the GOP as his own. The very fact that rotund, obtund, Limbo carries such sway with the GOP “Base” in and of itself clearly illustrates just how far gone the Republicans really are. Rush and Steele can’t decide who actually is the ‘leader” of the party. That is priceless.

Steele’s tenure at the helm of the GOP has been like watching the Exxon Valdez hit the rocky Alaskan coast in slow motion over and over again. If Michael Steele is not absolutely insane, then he is a total moron. With each interview granted, every television appearance, Steele hungrily shoves more and more feet into his perpetually open mouth. Just today, during an interview with a GQ reporter, Mikey incoherently stammered over his interpretation of “choice” regarding abortion. Inexplicably his comments were in direct contrast to the long held, sacred, ironclad, cornerstone position of the Party he alleges to “lead”. So much for appealing to the base, Mike. Oh, and by the way, you and your Party will probably not have much electoral success given your current policy positions and inept, shameful behavior. Chairman Steele will actually be subjected to a “No Confidence” vote by his own Party later this month. Wow! Don’t let the door hit you on your pea-brained ass, Mike.

The saddest truth about all the GOP activity since the election is that, in this, our Country’s time of greatest need, they continue to sally forth arrogantly, selfishly, without making any real effort to find common ground solutions so desperately needed. Back home they are able to con their illiterate constituents; once back in the fishbowl of Washington, they feel free to play their horrid games, undermine the greater good, lie, and corrupt the very machinery of government. They seem to have been watching a different movie from the rest of us for the last eight years. They obviously have not yet come to terms with the results of the November 2008 elections. Some of their stupidest operatives are polishing up Sarah Palin for 2012 while their miserably beaten Presidential candidate, Senator John McCain, hints that HE should be the Chairman of the RNC. Why is this tired, confused, blithering old man still standing? Some one should have the decency to put him out of his misery and plant him in one of his mansions where he can drool into a bucket in solitude.