ALL PROCEEDS WILL GO TO HERSELF 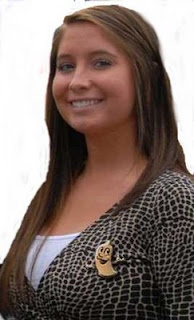 (March 12, Wasilla, Alaska) What’s a busty, young, single mom of a former Vice Presidential candidate to do? Well, Bristol Palin, the stacked daughter of Alaska’s Republican Governor, Sarah Palin, has apparently found her own means of financial support: she will pose topless for a variety of men’s magazines. It seems that Bristol’s taste of the wider world beyond her small Alaska town while campaigning with her Mom has left her eager for fame and fortune. In the meantime she will bare her beautiful breasts. “My mom thinks it’s great. By making money this way I am essentially starting a small business. It is capitalism”, said the chesty young wonder.

For her part the Governor is indeed supportive of her daughter’s modeling pursuits. “You betcha I’m behind Bristol all the way. Don’t ya forget now it was by entering beauty pageants myself that got me the exposure I needed. Now look, I am the Governor of the great state of Alaska and, by golly, I was almost Vice President of these United States.”

According to Bristol’s agent, Reno Slimebahlski, offers for Bristol to model topless began pouring in immediately after she began appearing at campaign stops with her Mom. “After being seen of TV by so many people during the Republican National Convention, Bristol was contacted by dozens of men's magazines especially those that cater to big breast fans. She was, at first a little reserved about the idea but, since she broke up with her high school drop out boyfriend, Levi, she is eager to show the world what she’s got up top,” commented Slimebahlski. 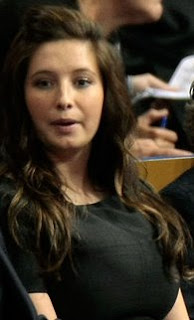 Bristol is scheduled for several photo shoots in the next few weeks. Jack DePalma, publisher of “Score”, “Voluptuous”, and other men's magazines says that “She has the potential to be bigger than Topsy Curvy, Melissa Mounds, Pandora Peaks, Jessica Juggs and Twin Towers. Her natural beauty and big boobies will make her an instant star. She has a fortune riding on her chest and she should capitalize on it.”

Bristol is eager to begin her modeling career. Her new born son will be tended to by her Mom and Dad while she flies to Los Angeles and Miami for photo shoots. She told the Anchorage Gazette that, “Ever since I grew boobies the boys have gone wild over me. I figure, like, why not make some money showing them off? I know I have great tits and I know there is a market for tits like mine. Who knows, it might even help me get a career in politics or something”

Soon to be Miss July on the cover of Juggs Magazine

The Republican National Committee has already taken notice of Bristol’s assets and anticipate using her photos in some fund raising campaigns. “If we put a topless picture of Bristol Palin on the front of our donation mailers I bet we’d haul in some serious bucks,” said an enthusiastic GOP Chairman, Michael Steele. He continued, “We think that once men see Bristol and all she has to offer and they realize she is a Republican, I believe our troubles as a Party might be over. She has certainly raised more than my spirits and I bet she’ll do the same for many male members of our Party.”