GREED AND GULLIBILITY: THE MADOFF “VICTIMS” 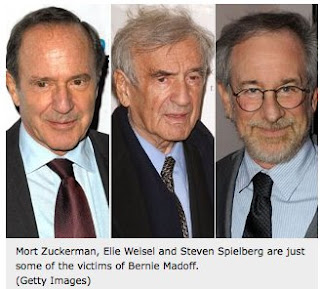 (March 12, Manhattan Criminal Court, NYC) As Ponzi scheme criminal extraordinaire, Bernie Madoff, was lead off to jail, some of his “victims” were present and willing to speak to the press. It is very difficult to feel sympathy for any of these people for a number of reasons.

The majority of the people involved with Madoff’s phony investment fund are very wealthy; these are not your average Joe and Jane Blue-collar whose 401K was decimated when Madoff’s house of cards came crashing down. To be certain, simply due to the scale and scope of Madoff’s connections in various banks and markets, some regular Joe’s have been impacted. But, they are in a distinct minority. Most of Madoff’s minions were playing with big money up front; their substantial investments were meant to yield very substantial dividends and boy, did they ever.

An examination of the public records from Madoff’s multi-charge indictment reads like a ‘Who’s Who” of the ultra wealthy American and Israeli Jewish communities. Yes, this is a fact, not an anti-Semitic accusation. Bernie’s “investors” really thought they had found the pot of gold at the end of the rainbow Madoff painted for them. Their greed and their greed alone allowed Madoff to run his scheme for almost 20 years. As long as the unrealistic, unnaturally lucrative dividends were being paid to his investors, they happily banked and spent the money. While the rest of the country’s investors were subject to the natural ups and downs in the markets, saw their investments and pensions seesaw from bull to bear cycles, those in Madoff World were immune and never wondered why. It was like manna from Heaven, the financial incarnation of the Loaves and the Fishes. Praise Yahweh!

A scam or con of any kind, from the most basic street hustle, to the complex manipulations of derivatives, future markets, commodities trading and the host of other exotic products that had been routinely offered by Wall Street, all rely on the “dupes” or, in Bernie’s case, the gullibility of his investors. It is just like lying; the most effective lies and liars are those who feed the person they are lying to what they want to hear. Likewise, Madoff’s tightly knit collection of rich Jews were more than content to think of themselves as “on to something special.” Yes, they felt tapped in to a secret, a closely guarded secret that played right into their greed. If nothing else, Madoff was a brilliant “social engineer”. He craftily blended his past Wall Street reputation and success, with his own unquenchable avarice, his ability to “smooth talk” his clients, some high profile philanthropy to bolster his public image, and his fabricated facade of a benevolent millionaire, mortared with unimaginable hubris. He had them all duped because they were willing to be had.

Of course none of them realized they were being had at the time. No, not at all. The money kept pouring in regularly just as brilliant Bernie had promised. Those rich powerful Jews fortunate enough to be “in the know” about the Madoff fund would quietly, almost conspiratorially, whisper in the ears of other rich, powerful Jews, close friends, swear them to secrecy and tell them about the fortune that could be made with Madoff. Not only was he an investing genius, he was a Jew, one of US. What could be better and, after all, who deserve such blessings more than the Jewish community. They could fund their charities here and in Israel, donate to good Jewish causes lavishly; almost as lavishly as they could spend their treasures on themselves. Oh yes, what a mensch, that Bernie!

And now come the melodramatics; victims crying for the cameras, expressing their hope that brilliant Bernie “rots in hell”. Now they turn to the government demanding answers, blaming laxity on the part of the SEC for their terrible losses. Sorry, folks, that dog won’t hunt. You, the victims had no problems with the lax regulatory climate that allowed your “God” (as Elie Weisel has called Madoff) to somehow create unknown wealth from an increasingly shaky market. No problem that your returns were absurdly out of sync with market and securities activities. Greed is am impressive insulator just as is the feeling that you are “one up” on everyone else. That hubris has all come home to roost and the only tears that should be shed should roll down the cheeks of the schleps who bought into Bernie’s game. Screw them. You lost it all because Bernie turned out to be the Big Bad Brilliant Jew? Too friggin bad. Suck it up.

While it is sad that many charitable organizations that have done altruistic, noble works that have helped many, the people who managed such endeavors, those that made the decisions for endowments, trusts and other people’s futures have no one to blame but themselves. Sure, they don’t want to hear it and they will never admit it. Their failure to admit their financially fatal flaws will forever prohibit them from accepting the harsh facts of reality. There are painful yet profound lessons to be learned here; lessons that go way beyond investment strategies. Human nature at its worst, at its most base level manifest itself in greed pure and simple. These arrogant, mega rich Jews lived by the credo of the fictional Wall Street tycoon Gordon Gekko, “Greed is good.”

Well, folks, its not. At least not always and for you - not for ever. So put away your hankies, turn away from the TV cameras, keep your outrage and anger to yourselves. You had no problems keeping the great Madoff scheme a secret when it served to enrich you so please have the same courtesy now; shut the fuck up! Go away. Scurry back to your upper East Side penthouses, your Grammercy Park brownstones, your beachfront condos in West Palm Beach and your palatial mansions in Englewood Cliffs, The Hamptons, and Beverly Hills. Go back into the comfort your riches have brought you to lick your wounds. You’ll find no sympathy out here in the real world, among the masses you once so callously derided because you were wealthy. You lost money. Big deal. Everything is relative. Tell it to your Rabbi.

Copyright TBC 2009 © All Rights Reserved
Posted by Brooding Cynyc at 7:11 AM