NEW FACES AT THE RNC 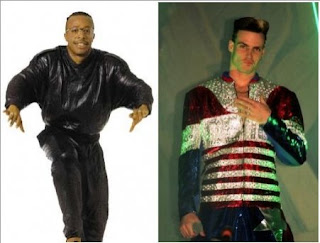 MC HAMMER AND VANILLA ICE TOP EXECS AT THE GOP


(March 12, Washington, DC) Touting his efforts to broaden the appeal of the Republican Party, embattled GOP Chairman Michael Steele has named two former rap one hit wonders to his Executive Committee. Steele has expressed his desire to give the impression that the Republican Party is inclusive and not the refuge for white, southern men, conservative oddballs, the NRA and other hard core fringe groups. He promised to make it more, “hip-hop, urban, suburban” with an emphasis on political “bling”. His staffing picks announced today may in fact help him accomplish his outreach to a younger generation of potential Republicans or it may only accelerate his departure from his current job.

Steele really had to dig deep in the greasy barrel of forgotten rappers or pseudo-rappers. Most of the big names in rap that he initially approached told him to fuck off or simply get lost. Chairman Steel had met with famous gangsta rappers like Snoop Doggy Dog, Fifty Cent, Eminem and Will Smith. He was rebuffed and ridiculed by them all and others not named here. Desperate to prove his Party is “down with wuz up on da streets”, Steele enthusiastically introduced his two top appointees here today.

MC Hammer and Vanilla Ice, coming off there widely successful concert tour that lasted one night in Orem Utah, will play key roles in the GOP’s outreach initiatives. During a news conference held at Big Slappy Pappy’s, a hip-hop bar, bordello and hair styling mecca in northwest Washington, DC, Steele enthusiastically told reporters that, “I am delighted to have MC Hammer and Vanilla Ice on board at the GOP. I think they are jus’ B A D. We gonna hit da streets and git with the brothas and sistas. We wants to know wut dey sayin’, wut dey sayin’ and wut dey think of the stimulus package.”

Since his razor thin margin of victory in his bid to be Party Chairman last month, Steel has been embroiled in a continuous series of controversies, gaffes, miscues and finds himself literally fighting to hold on to his job. The GOP will hold a “no confidence” vote in two weeks that will determine the Chairman’s fate. “ I’m confident that I will prevail, hold onto my job and will be able to lead the Republican Party out of the depths of despair after getting our asses whupped last November, to a new and brighter future. What the base of the GOP is going to have to understand is that our future will be Blacker as it gets brighter” Steele commented.

The Republican’s appear to be in disarray since the inauguration of President Obama. They find themselves in the minority in both Houses of Congress and have long been known to not be at all receptive or supportive of policy initiatives that concern African Americans, Latinos, Hip-Hoper’s, Gang Bangers, Low Riders, Side Winders and Gay-Lesbian-Bi, Tri, and Multi-Sexuals and other special interest groups long affiliated with the Democratic Party. Perhaps Steele’s new Executive Committee members will play significant roles towards making inroads with inner city and minority voters. Naming MC Hammer and Vanilla Ice to his staff has generated a variety of responses from across the political spectrum. Some top ranking members of his own Party, already at odds with him, have come out strongly in opposition to Mr. Hammer and Mr. Ice.

Senate Minority Leader, Mitch “Little Bitch” McConnell said, “I don’t know what exactly the Chairman is planning but, it seems to me that he has lost his mind. Who are these people he has appointed? Frankly, I am confused and I will be demanding answers from Mr. Steele immediately.” Conservative radio blowhard Rush Limbaugh who has been feuding with Mr. Steele for weeks over the actual leadership of the GOP, told his talk show audience that, “Steele thinks that the Republicans, the Party of Barry Goldwater, Richard Nixon and Ronald Reagan actually needs to attract voters who are not gun-toting, southern, midwestern, God fearing, rock ribbed conservatives. I say that is hogwash. I say that is crap and I think Steele has to go. The last thing we need in the Republican Party are Blacks, Hispanics and other misfit, low lifes.”

When Steele was informed about McConnell’s and Limbaugh’s harsh comments he replied, “Listen, y’all. Those two morons can kiss my black ass. They are the reason that the Republican Party is dying. Those two honky, cracker, muthafuckas deserve to get they asses kicked. People like them don’t know wuts goin’ down in the ‘hoods with the real people. I say they can both go fuck themselves and each other. Mitch, bein’ from Kentucky, would probably enjoy that.”