WHAT KELLY CONSTRUCTED
BRATTON WILL DEMOLISH 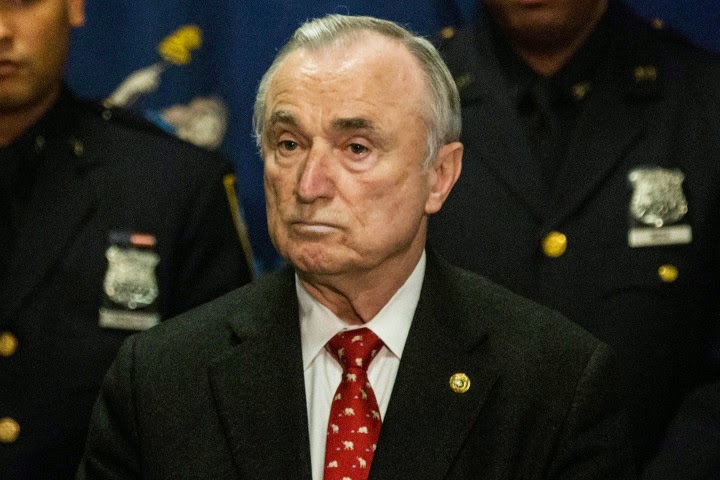 
NYPD to his liking

(Wednesday April 16, 2014, New York City)  If his twenty years away from New York City policing did anything for Bill Bratton it was to make him an even shrewder politician then he was.  In his latest version as NYPD Commissioner, Bratton 2.0, he has already staked his claim to plots on the political landscape that his predecessor Ray Kelly never knew existed and, even if he had, he would have paid them little attention.  This early on in his second tenure as the Police Commissioner has already provided a fairly clear picture of where he intends to direct the NYPD.  Perhaps he has just become so enamored of himself that he actually is acting with objective intelligence, logical and practical fact rather than what appears to some as just simple, blatant , dirty politics.  It has also become evident in the last few weeks the deep seated animosity Bratton has against Kelly and that is surely more akin to jealousy; Bratton is no Kelly and never will be.  That Bratton has seemingly gone out of his way to trash Kelly in very public forums reveals Bratton’s trite, vindictive, undisciplined sides that work in tandem with his outsized ego and sense of absolute authority.  Whatever Bratton once was as a Police Commissioner is long gone and only the sharp, pointy skeletal fragments remain.

On the same day a video clip was aired on CNN and the story of it widely reported in other news outlets showing the second in command of Al Qaeda, Nasir al-Wuhayshi, deliver a fiery speech before an audience estimated to number near 100 hard core zealots, Bratton decided to dismantle one of the off-shoot Intelligence Division Units that was constructed by Kelly in the wake of September 11, 2001.  Despite the Unit’s policies, protocols and tactics having been vindicated in two separate court cases, Commissioner Bratton thought it would be better to “heal” what he referred to as “poor relationships” between members of the Muslim, Islamic, Arabic and Middle East communities within the Five Boroughs and the NYPD.  There are two other lawsuits pending that question the legality of the activities of the Zone Assessment Unit, formerly known as the Demographics Unit although those very same questions have been answered in the affirmative, not only in courtrooms, but by legal scholars and constitutional lawyers.

The video clip that was released on several radical Islamic web sites is now being analyzed frame by frame by the CIA and NSA. High placed sources in the intelligence community agree that it is authentic.  As al-Wuhayshi grows angrier during his tirade he makes the comment, "We must eliminate the cross. [...] The bearer of the cross is America!"  According to intelligence sources, it was unusual to have so many high ranking al Qaeda members travel to one place for their conclave and that it has been “quite a while” since this much “chatter” from the terrorist organization has been accessible.

When Michael Bloomberg succeeded Rudy Giuliani he chose Ray Kelly to serve as his Police Commissioner.  Kelly, whose apartment is in Battery Park City just blocks from where the Twin Towers once stood, realized that he would need to develop and implement new, novels strategies and tactics for the Police Department he commanded now that the terrorist had brought their war to our City. Kelly was determined to insure, as best he could, that the City and her people are never surprised such as they were on 9-11-2001.  Kelly was convinced that all the federal and military intelligence agencies were worthless; staffed by pension-padding, disinterested, disgruntled employees still preparing to fight the next world war with the USSR.  Kelly went to the Mayor with his plan to organize a new Intelligence Division dedicated to the external threats to our City.  NYPD already had an Intelligence Unit but their primary focus was on gangs, gun and drug runners and organized crime. That Unit would remain largely unchanged; they would be enfolded into this new Intel Division. As the plans were developed for this revamped Intel Division the PD and City lawyers were in on it from the very beginning.  All involved realized they might be treading a fine line between their vision and the constitutional rights afforded to all who live here.

As all the details were being hammered out Kelly brought two veteran Intelligence Officers to oversee his new Division. Both David Cohen and Richard Daddario were long time CIA Officers and were more than eager to come to New York and be a part of this new Division.  Kelly was also recruiting in the from the Ivy Leagues colleges for computer scientists, analysts of every stripe as well as seeking out more people to work as linguists since some of the languages spoken by terrorists are not commonly taught in colleges here.  Now, with Cohen installed as the  Deputy Commissioner of Intelligence and Daddario serving as the Deputy Commissioner for Counterterrorism the Division began to take shape, grow and go on to be an important component in the array of Intelligence gathering and analysis deployed throughout the City.  Another well respected and highly regarded CIA Officer joined the Division at the request of Cohen and then CIA Director William Tenet allowed Larry Sanchez to work with the NYPD.  It was Sanchez who orchestrated many of the operations of the Zone Assessment Unit.  It should be noted that the Intelligence Division created under Kelly stands as the premier Unit of its type and is the model for cities from coast to coast and abroad as well.

So, with the departure of Bloomberg and a new Mayor in City Hall the entire “brain trust” of the Intelligence Division resigned.  It is always customary for some officials such as the NYPD Commissioner to offer his resignation whenever there is a change of Administration.  Their resignations were expected but the men and women working in that particular Unit, conducting various details and operations did not really believe that de Blasio and Bratton would ever be so foolish as to actually disband one their operational intelligence tools.  But, sadly, they were wrong.  That is precisely what happened.

One might now wonder who will fill the void atop the Intelligence Division and what will become of the Detectives and Officers who were assigned to the Zone Assessment Unit.  As has been reported and confirmed by a ranking member of the Intel Division, those personnel have already been “reassigned” by the man who replaced the powerhouse trio of Kelly, Cohen and Daddario, former TV News journalist and longtime Bratton side kick, John Miller.  Miller is now in command of the Intelligence Division and, as several members of the Division commented, “There will be more profound changes around here.  Having Miller as Deputy Commissioner for Intel is an insult to all of us who have been here since day one.  Miller is a PR (public relations) guy, not an intelligence expert”.

While Ray Kelly worked 12 – 14 hours for most of his tenure from 2002 to 2013, Bill Bratton spent most of that same time as a high priced public speaker and “consultant”.  He was able to cash in on his police experiences and was handsomely rewarded for his efforts in the private sector.  Ray Kelly’s agenda, it is fair to say, was a bit more urgent. The threat of further terrorist attacks haunted most New Yorkers for the years immediately following 2001. As the years passed it seemed that much of the City had moved on and become complacent and aggravated by some of the new security restrictions that have altered large swathes of Midtown and other sectors throughout the City.  Many began to complain about how the City was being transformed into a “surveillance state” as more and more closed circuit cameras began sprouting up all over the City.  Activists asserted that the rights of the people were being trampled but, as has been stated already and recounted in many sources over the last decade, that was not and never has been the case.

Complacent, aggravated, inconvenienced, frustrated or whatever the public sentiments were they were secondary to providing them with safety and security.  The public, civilians can afford to feel those emotions while the men and women in the trenches, the members of NYPD who now keep tighter grips on some of our landmarks, government buildings, the Wall Street Area, just to name a few, have remained ever vigilant.  Constant vigilance is our most effective weapon.  With the disbanding of the Zoning Assessment Unit we have just lost a layer of protection and prevention for no reason other than it was causing some alarm in certain segments of the City.  De Blasio and Bratton will cave to pressure from their “constituents” but, if, God forbid, we suffer another attack, there will be hell to pay.  Let’s hope we never find out just how much more vulnerable we are today than we were yesterday.  Al Qaeda is most certainly monitoring developments here, we remain their primary target.  We should also hope that John Miller is a fast learner.