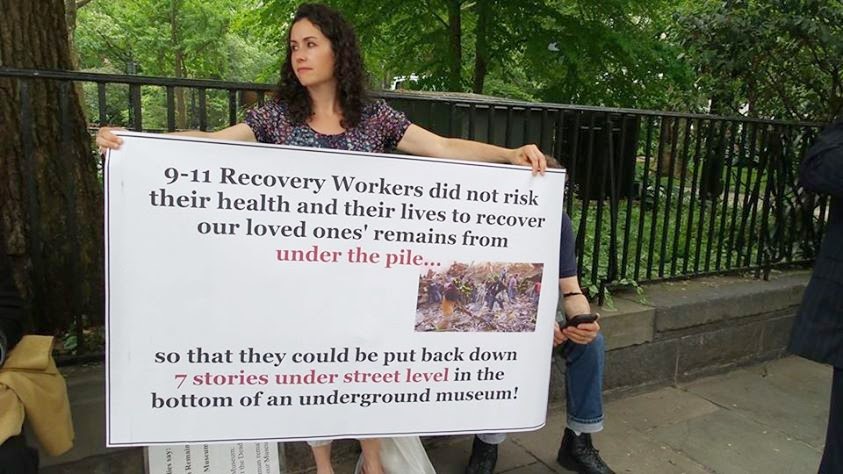 
of the remains of her brother Sean Tallon who perished on September 11th.


about placing them at bedrock in the Museum.

(Friday May 23, 2014, Chambers Street, Lower Manhattan, NYC)  The world over there are places, some otherwise anonymous parcels of land; others, sprawling acres where the soil is figuratively and literally soaked with blood.  The events that took place at these disparate sites share the commonality of being sacred, of being possessed of a timeless meaningfulness that demands respect and reverence.

Some of these sacred grounds were battlefields, sites of brutal conflicts between warring religions or tribes; some still bare the shifting shadows of genocidal mass murder and still others have hosted evil, the purest evil humanity can imagine.  But we do not need to imagine that brand of evil; we have witnessed it time and again and it is for that reason and that reason most importantly that we set these sites aside in perpetuity.  We maintain these sites as memorials to the events that transpired upon them and the lives lost at those hallowed places.

In our country many of our most revered sites are former battlefields that tell the story of our country and the starkly bloodied chapters representing our darkest days.  On what today is all United States soil we fought a War of Independence, the War of 1812 and a Civil War that almost tore our burgeoning nation asunder.  Antietam, Manassas and Gettysburg are all sacred Civil War graveyards and locales from Wounded Knee, Bull Run and other spiritual sites along The Trail of Tears mark our systematic annihilation of the Native American population.

The most recently designated sacred plot of American soil are the 16 acres that the Twin Towers of the World Trade Center majestically arose from. The loss of life at the hands of Islamic terrorists on September 11, 2001 is unrivaled in our domestic history.  While tens of thousands were able to find a means of egress from the stricken Towers, thousands of others lost their lives in the scorching, steel-melting fires or the ultimate collapses.  Many of the dead were attempting to escape; still others were entering.  Members of Service (MOS) of the Fire Department of New York City (FDNY), the Port Authority Police (PAPD) and the New York City Police Department (NYPD) ascended the stairs in their valiant efforts to render assistance to those above.  Many of those brave souls sacrificed their lives so that others might live.  In all 343 members of FDNY, 37 members of PAPD and 23 members of NYPD were lost.

It is fair to say that there is not a person in NYC or the wider NYC Metropolitan area that was left completely unscathed by that infamous day. Certainly the families of those lost and those individuals who escaped death live with grief that remains inconsolable.  As large as the population of the NYC Metro area is, the “six degrees of separation” principal still applies.  Everyone knew someone, was acquainted with someone who knew someone who had gone to school with, was from an old neighborhood or the numerous other ways we are directly, indirectly and tangentially connected.
*****     *****     *****

Today the two single plot acres from which the Towers each soared are tasteful granite topped mourning ponds in the literal footprint of each tower.  The 1,776 foot tall Freedom Tower is structurally complete with only the infrastructural specifics remaining uncompleted.

Two days ago the long awaited 9/11 Memorial - Museum located under the ground of the former WTC Plaza was dedicated and opened to family members of the fallen.  The controversy surrounding this subterranean “Museum” component of the larger Memorial has been profound and has created a rift within the otherwise tightly knit sects of the WTC Community.  And let there be no mistake about it, there is plenty to be troubled, upset and even, for some, outraged over.

Perhaps the major point of contention in the 9/11 community has been the decision to entomb the remains of the 1,115 unidentified victims within the underground Memorial/Museum.  For some this decision represents an insulting absence of respect and decorum yet others see this decision as a proper internment.  The arguments on each side are quite naturally passionate and valid.

One of the most blatantly insensitive elements of the Memorial/Museum that has roiled all members of the 9/11 community is the presence of a gift shop.  Many feared, as did we, years ago that this hallowed site would one day be just another tourist trap, another NYC landmark to have photos taken and purchase crass, distasteful souvenirs and trinkets.  It is almost beyond belief that the powers that be could be so egregiously emotionally tone deaf by allowing a gift shop to occupy the same space that has been sanctified with the blood of thousands and with the mortal remains of the as yet positively identified deceased.

While it is not possible to accommodate the desires of all members of the 9/11 community, the baseline for consensus should have been the lowest common denominator which, in this case, would have been to treat this 16 acres as a cemetery; a living breathing parcel of soil were the souls of the lost still wander.

There are plenty of apologists for this finished product, many who have no problem with the gift shop or the underground mass tomb of the unidentified.  Perhaps a bit of perspective might alter their thinking.

Many of the notorious Nazi death camps have been restored and are maintained with private philanthropic funding similar to some of the funding that made the 9/11 Memorial/Museum possible. Would it be proper to peddle souvenirs to visitors at Dachau, Auschwitz, Buchenwald, Belzec, Sobibór or Treblinka?  Would it be  appropriate to have a black tie affair to “thank” fundraisers who financed the restoration of these sites of unthinkable evil similar to the “gala” that took place here two nights ago?  The place for such affairs is not at the site but somewhere else. It is for this reason that folks gather after a funeral not at the cemetery but at a neutral location to celebrate the life of the recently buried.  There are countless examples where the reverence and decorum of the site was such that it would forever be unthinkable to use it for tawdry purposes.

As much as September 11, 2001 was a day of shared horror and sadness for everyone in the NYC metro area and across the country, essentially in many important ways it remains uniquely personal for thousands of families, families who still commute to and from work and still see the void, the harsh absence of our Twin Towers.  The Freedom Tower is a beautiful structure and a fine anchor point for the other building that will reconstitute the World Trade Center Plaza.  It is symbolic, not a replacement just as the memorial ponds in the footprints of each tower is a subtle monument to those first victims of a war that we continue to wage today.

Posted by Brooding Cynyc at 5:05 AM

What to say? This is a very hard subject to address because there are so many sides to this issue. The remains. Some (not all) of the families want the remains moved to a monument above ground. One family member said having the remains adjacent to the ground floor of the museum (no- it's not a basement) was making it a dog and pony show. I disagree. The common wall is beautiful and respectful. Only family members are allowed in the room. Moving it above ground to what is now a public plaza would make it a dog and pony show because the reality is, tourists will, within not too many years, be the majority of people who visit the memorial if not the majority now. The memorial will be a tourist trap, and on some level it's supposed to be. Because maybe those maligned tourists are also there to pay their respects and to be touched by the magnitude of what they see. But as a public plaza you can bet there will be those who don't care or have no respect. But the museum, you pay to enter. The average person on the street will not be down their chewing on food from the street vendor and tossing his hot dog napkin on the floor. There are plenty of family members who have said they are happy with the remains being where they are. They are just much quieter.

Gift shop? Yes- it's tasteless as it is now, but the reality is unless the museum gets federal funding, everything they can do to make money is needed. Many of the hundreds of thousands of people who visit will want to take something away with them, to show they've been there. I hope the people who run the shop get a clue and a lot of taste, but even Gettysburg sells teeshirts. I saw one tonight on a friend.

For some people nothing about the museum will satisfy them and we in the community have to come to terms with the fact that the site no longer belongs to us but to the nation. - d

Could not disagree more with your opinions but I appreciate the fact that you read the post and took the time to present a thoughtful comment.