OBAMA CHIEF OF STAFF BAILING OUT 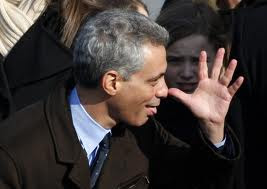 (Sept. 30, 2010, Washington, DC) Despite what will no doubt be vigorous statements to the contrary, the early exit of White House Chief of Staff Rahm Emanuel, ostensibly to run for Mayor of Chicago, is but the first of what will be several high profile departures of top aides and advisers just 20 months into Obama's first term in Office. Members of the Administration's Cabinet and Economic team are expected to jump ship shortly after the upcoming mid-term elections if not sooner. The fact that an exodus of a small but highly placed and trusted band of those closest to the President is an ominous sign and does not bode well for Mr. Obama and his legislative agenda.

No matter what arguments the White House and Democratic Party spin machine spew forth as one by one Obama says good bye to those abandoning his ship, there is great disappointment and frustration among Democrats and Independents both in and out of the White House and across the country. Some of candidate Obama's strongest allies have grown disenchanted with many of the stands the President has taken on such major issues as the protracted economic recession, the automobile industry bail outs, as well as the wars in Iraq and Afghanistan. No amount of spin can obscure the absolute failures and self inflicted wounds that have left a restless public angry and poised to unseat Democratic majorities in both Houses of Congress.

It is true that on the day he was sworn in to Office Mr. Obama inherited a mother lode of staggering problems, domestic and international, compliments of the horrendous 8 year reign of ignorance and hubris of the Cheney / Bush Administration. However, his electoral victory was interpreted by many as a mandate. The President had control of both Houses of Congress, public support, and an opportunity to capitalize on the apparent “good will” the public had towards him as our first African American President. And a radical departure from the moronic, messianic Bush.

As the Obama team set out to prioritize the host of problems before them they felt confident that they would be able to maneuver their legislative remedies through the Democratically controlled House and Senate. Emanuel's appointment as Chief of Staff was advertised as a huge asset; they claimed that Rahm's experience “working on the Hill” as a member of Congress would allow them to shepherd their bills and initiatives through the “friendly” Congress and , perhaps, pick up some “bipartisan” support for some of the thorniest issues such as health insurance reform. Mr. Obama's honeymoon was doomed to be over very quickly. Emanuel proved to be not only “ineffective” among his former Congressional colleagues, he actually served to inflame the passions of the Republican minority by employing his well known tactics of “sharp elbowed politicking”.

When the then President-elect began announcing the names of those who would go on to comprise his Cabinet and upper echelon advisers, many were disappointed with the lack of “creative' choices he was making. Many of his Cabinet nominees came with baggage, poor reputations, and scant credentials for the positions they were about to assume. “President Obama had the opportunity to draw a great deal of 'new blood' into Washington. He could have populated his Administration with some real outsiders, some very talented minds were not even considered”, said Hank Belcher, a long time, behind the scenes Democratic Party operative. Belcher went on, “Many of us were not only disappointed with his (Obama's) choices but were actually dismayed. Rahm was never going to be a truly effective Chief of Staff and many of us knew that”.

Now as the President faces the possibility of substantial mid term election loses in his Party with the Majority status in both Houses on the line, some of his ship jumpers are inflicting “extra damage” to an already bloodied and wounded Administration. One of Obama's top aides speaking not for attribution commented, “Let's face it. Our economic team has been disastrous. Our outreach to the GOP was doomed from the get go yet we persisted thinking they were acting in good faith. That especially hurt us in negotiations for the health insurance overhaul. Rahm had us talking to assholes like Chuck Grassley, Mitch McConnell, and Ben Nelson when we knew these guys were bought and paid for by the pharmaceutical and insurance special interests and in the pockets of lobbyists. We should have written our bill our way and dared them to vote publicly up or down. I can tell you one thing, had we done that, we would be looking at an entirely different political landscape this fall”.

The President in recent days has taken to “campaign style” rallies across the country in the hopes of boosting the Democratic candidates in tight House and Senate races. Mr Emanuel's decision to leave and run for Mayor of Chicago has been a “distraction” to say the least. “I wish he would have left months ago if he knew he had any intentions of running for Office”, noted Obama's closest adviser, David Axelrod. He continued, “Rahm and I have known each other for years. I never liked or trusted him and he knew that. I blame him for many of the gross missteps, miscalculations and inaccurate readings of the political winds over the last 20 months. Frankly, he should go run for mayor of Tel Aviv”.