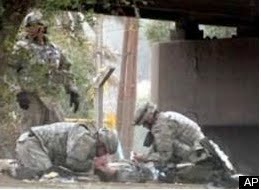 Suicide among active duty members of the Armed Forces as well
as veterans from Iraq and Afghanistan combat has reached epidemic proportions.

(Saturday Oct.2, 2010 Piscataway,NJ) Makeshift shrines comprised of framed photos of the young suicide victim, votive candles, short hand written notes, and stuffed animals dot the sprawling campus of Rutgers University. Earlier this week a 19 year old freshman, Tyler Clementi, apparently jumped to his death from the towering span of the George Washington Bridge just days after a sexual encounter between Clementi and another man was caught on a hidden video camera and spread on the Internet. The two students responsible for streaming the sex video may face criminal charges. This case has gotten has tremendous amount of attention in the national media and two New Jersey Congressional Representatives have announced plans to introduce a Bill to combat such “hate crimes.”


Far from this tree lined, grassy, rather sleepy college campus in the dusty flats of West Texas, Fort Hood, one of the largest Army bases in the Country, is still in the grips of its own suicide crisis. Before Tyler Clementi jumped to his death as the result of Internet “bullying” four combat veterans from the battlefields of Iraq and Afghanistan killed themselves; just the latest in what is quickly turning into a veritable “suicide epidemic” in the Armed Forces of the United States. The military suicides received nowhere near the publicity the Clementi death has and, therein lies a dilemma if not a corollary: returning Vets suffer in silence and obscurity.


Wracked by profound cases of Post Traumatic Stress Disorder (PTSD), thousands of young war veterans continue to live the horrors of their battlefield experiences, many spiraling down into the darkness of severe depression,many self medicating with excessive alcohol and drug intake,while others among them, many others, having sought relief from their suffering by killing themselves. Yet, what merits the national attention, which tragic circumstance is embraced as the latest cause celebre’ by famous actors and artists, and what has come to define the suicide debate among politicians? Clearly, it is not the ongoing crisis in the ranks of our military service personnel, both veterans as well as active duty. After almost 10 years of continuous war on two disparate fronts, years of multiple deployments, inadequate mental health care resources, and increasingly greater demands placed on their young shoulders, the men and women of our military have become largely forgotten by the media and their fellow Americans. That is tragic for everyone on both sides of the equation.

What merits our attention, outrage, and ultimately our action, says a great deal about the culture, the society we live in. We as a country ask great efforts and sacrifices from those few among us who answer the call of their own to voluntarily serve their country in uniform. Gone are the days of shared sacrifice. Long ago is the time when going into the “service” was a right of passage for men in times of peace and times of struggle. When our elected leaders had that common service experience among them, they were much less willing to ask other young men (and women) to go and serve in armed combat, to put lives “in harm’s way”. When our leaders were familiar with the brutality and horrors of war, the nuts and bolts of close combat and all that it entails, they recognized exactly what it meant to send troops to defend our national interest, our “National Security”. Now the burden is borne by a mere fraction of the population and the hell of war for the rest of us is reduced to short film clips on the news. We can little imagine or appreciate what stresses our troops incur having to live hypervigilantly in horrid environments with the very real specter of their own deaths as well as the taking of others lives is a major constant component of thier reality.


Our society is still beset by internal conflicts of varying importance and significance. We have overcome some of our greatest collective fears and failures yet pockets of ugliness exist in segments of the populace as well as among individuals within it. That Mr. Clementi came of age during years of increasing tolerance and understanding for all individual rights seems sadly ironic when juxtaposed with the stark fact that he was “done in” by the unjust intolerance and cruelty of his peers. Certainly his death, the fact that mockery and “bullying” figuratively pushed him over a very real ledge, is proof of the lack of understanding that still exists. His death should not be “in vain” (as if any death can ever be classified as such) and should be held as a tragic example of what stresses our misunderstanding and lack of tolerance can put on an individual, a vulnerable, young individual just beginning to find his way in life.


Likewise we as a nation should recognize the stresses we are expecting our service members to endure for years on end and recognize that many of them are returning home badly damaged physically, mentally, spiritually and emotionally. We need our Government to repay these brave men and women by giving the military all the resources required to assure everyone in need of help, no matter the nature of the condition or malady, has the opportunity to receive it. We as a people should hold our elected representatives accountable. We should expect as much vigor and enthusiasm to greet our returning warriors as there was when we sent them away to do our battles.


By every metrics available as quantified in clinical studies by agencies from the CDC to the DOD the mental health crisis in all branches of our military is truly at epidemic proportions. Suicide is just the tip, a sad and very obvious tip of a cold, heavy, impenetrable iceberg that extends deeper than anyone ever thought it could. Our military is broken and many of the young enlistees are coming back to civilian life accompanied by demons we cannot imagine. They need as much attention as do the young people who live closed lives wrestling with their sexual identity or a myriad of other mental health troubles that leave them damaged and more vulnerable.


Until every suicide of a young American results in the same level of outcry and outrage from the public we will continue to send youngsters to fight our wars and allow others among us to live in fear. Equal rights are equal rights and should be equal. Sadly, we only begin to approach matters of equality and responsibility when the damage is already done and can no longer be avoided.

Please teach your children the meaning of tolerance.

Copyright TBC 2010 © All Rights Reserved
Posted by Brooding Cynyc at 10:54 AM